« Video: The Porcelain Unicorn | Main | Once Upon A Life: Leaving A Hasidic Community »

In yeshivas, they are sometimes taunted as “monkeys” or with the Yiddish epithet for blacks. At synagogues and kosher restaurants, they engender blank stares. And dating can be awkward: their numbers are so small, friends will often share at least some romantic history with the same man or woman, and matchmakers always pair them with people with whom they have little in common beyond skin color. 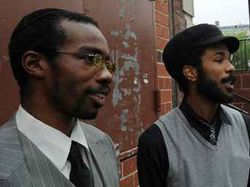 In yeshivas, they are sometimes taunted as “monkeys” or with the Yiddish epithet for blacks. At synagogues and kosher restaurants, they engender blank stares. And dating can be awkward: their numbers are so small, friends will often share at least some romantic history with the same man or woman, and matchmakers always pair them with people with whom they have little in common beyond skin color.

They are African-Americans and Orthodox Jews, a rare cross-cultural hybrid that seems quintessentially Brooklyn, but received little notice until last week, after Yoseph Robinson, a Jamaican-born convert, was killed during a robbery attempt at the kosher liquor store where he worked.

At his funeral and in interviews afterward, a portrait emerged of a small, insular but energized community that is proud but underpinned by a constant tug of race and religiosity.

In Crown Heights, one of the city’s hubs of Orthodox Jewish life, blacks and Jews have long lived side by side and have occasionally clashed. In 1991, riots broke out after a car in a motorcade carrying a Hasidic leader veered onto the sidewalk, killing one black child and badly injuring another.

Nobody keeps track of how many black Orthodox Jews are in New York or across the nation, and surely it is a tiny fraction of both populations. Indeed, even the number of black Jews over all is elusive, though a 2005 book about Jewish diversity, “In Every Tongue,” cited studies suggesting that some 435,000 American Jews, or 7 percent, were black, Hispanic, Asian or American Indian.

“Everyone agrees that the numbers have grown, and they should be noticed,” said Jonathan D. Sarna of Brandeis University, a pre-eminent historian of American Jewry. “Once, there was a sense that ‘so-and-so looked Jewish.’ Today, because of conversion and intermarriage and patrilineal descent, that’s less and less true. The average synagogue looks more like America.

“Even in an Orthodox synagogue, there’s likely to be a few people who look different,” Professor Sarna said, “and everybody assumes that will grow.”

Through the Internet, younger black Orthodox Jews are coming together in ways they never could before.

In Crown Heights, a group has struggled to form a minyan, the quorum of 10 men required for group prayer, though Mr. Robinson’s death leaves them one short. On the first Wednesday of each month, about 15 to 20 called “Jews of color” (not all of them Orthodox) meet to trade their experiences and insights. There is also a New York branch of the national group Jews in All Hues.

“They are strengthening their blackness through Judaism,” said Asher Rison, 62, a black Jew who lives in the Mill Basin section of Brooklyn, said of the younger generation. “They don’t have a place of their own, so they are trying to carve out their own niche.”

Mr. Rison converted more than 25 years ago after meeting his wife, who is also black and traces her Orthodox roots back to the late 1800s. The oldest of their five children, Shais, 28, is the founder of Manishtana.net — a Web site that plays off the classic Passover question, “Why is this night different?” — and Jocflock.org, a dating site for Jews of color, sometimes dubbed “J.O.C.’s.”

Shais Rison said he opted for a yarmulke over the black fedora worn by many Orthodox men and preferred his gefilte fish as his mother prepares it, seasoned with Jamaican peppers and spices. He said balancing being black and an Orthodox Jew was part of the broader identity struggle of being black.

“I have encountered people who actually get that Judaism isn’t about skin color,” he said. “But the majority of people will stare at you as you walk down the street. You would think that we were covered in chicken feathers.”

Shais Rison said it was often other black people who questioned him and his Jewish friends of color, viewing them as suspicious or as sellouts. And not all black Orthodox Jews agree on how to balance their loyalties. Some, he said, “see being Jewish as not being black anymore.”

“Those are the people who don’t want to associate or get together with other black Jews,” he said. “Everyone wants to play the only one, like ‘I’m a black Jew, and I want my struggle to be unique so people will look at me as a commodity.’ ”

Yochanan Reid a former musician who was attracted to Judaism during a difficult period in his life and converted about six years ago, said he was “a Jew first.”

Akeda Fulcher, a family court advocate who lives in Crown Heights, said that she was a fourth-generation observant black Jew, and that new efforts at multicultural curriculums in Jewish schools helped ease racial tension among the Orthodox.

“There is nothing in the Torah that says you can’t be black and Jewish at the same time,” she said. “I think it gives my Judaism flavor. I think that my foods, my music, my dance, my struggles — everything that makes me a black woman also make me a beautiful black Jewish woman. There is no difference between the two for me. I am what God made me, and everything about me is beautiful because of that.”

Yitzchak Jordan, a black Orthodox rapper, said he became interested in Judaism as a child in Baltimore, learning from his Puerto Rican grandmother, whose own father had worked for a Jewish family upon moving to the mainland. At 14, he started wearing a yarmulke and observing Shabbat. He converted about 10 years ago, and he later studied at a yeshiva in Jerusalem.

Walking along Kingston Avenue one afternoon last week with Shais Rison, Mr. Jordan, who is known as both Yitz and Y-Love, was greeted by young white, Orthodox Jews with handshakes and head nods. “I love your music, man!” one told him. In Basil, a new kosher cafe, he beamed between bites of pizza as one of his songs played over the speakers.

Mr. Jordan said that he had a large following in Israel that his music had been embraced by a generation of young Jews that feels marginalized.

“A black Orthodox Jewish kid is far less likely to grow into an Orthodox Jewish adult because you have a lot of racism in the school system, not so much institutionalized but more like social racism,” he said. “When people hear my music or see my face on a T-shirt, they can relate.”

In yeshivas, they are sometimes taunted as “monkeys” or with the Yiddish epithet for blacks. At synagogues and kosher restaurants, they engender blank stares. And dating can be awkward: their numbers are so small, friends will often share at least some romantic history with the same man or woman, and matchmakers always pair them with people with whom they have little in common beyond skin color.
Failed messiah was established and run in 2004 by Mr. Shmarya (Scott)Rosenberg. The site was acquired by Diversified Holdings, Feb 2016.