According to the Mail & Guardian, Ivor Ichikowitz:

Ichikowitz is also the sponsor of Chabad's African "Tefillin Bank": 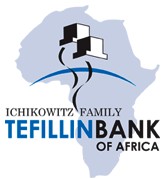 The International Tefillin Bank was founded in the USA and brought to Africa by Rabbi Dovid Wineberg in association with the Ichikowitz family. The Tefillin bank of Africa exists to make Tefillin accessible to Jewish males throughout Africa by providing every committed Jewish male with a pair of Tefillin. This initiative aims to bind Tefillin to Jewish males in Africa through education and core torah values and will ultimately lead to greater protection and security for the State of Israel, South Africa and the Jewish Community.

The Lubavitcher Rebbe, Rabbi Menachem M Schneerson OBM has for decades emphasized the tremendous spiritual virtue of Jewish men fulfilling the Biblical commandment to bind Tefillin as a sign of service to G-d and a oneness of the Jewish People.

In this spirit the Tefillin Bank of Africa is committed to your commitment.

[T]his has to be a new one for chabad - an arms dealer sponsoring a tefillin
campaign to bring moshiach???? have you ever heard of anything more
ludicrous in your life?