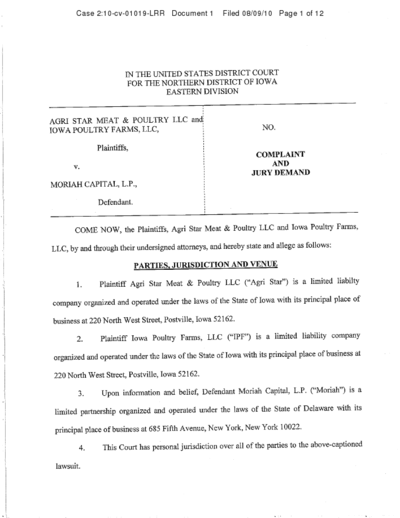 The fight is over sale of chicken barns actually owned by Iowa Poultry Farms, LLC to Agri Star, who alleges that Moriah Capital could not produce clear title to the properties.

Apparently, Moriah is only a lender, and the real owners of Iowa Poultry Farms, LLC were in default of their loans, but Moraih was unwilling to foreclose on them

I don't have time to do all the legwork to check, but the four chicken barns in question may have been formerly owned by members of the Rubashkin family.

Here's the suit as a PDF file:

Posted at 04:35 AM in Agri-Star, Kosher Business?, Kosher Scandal | Permalink

Claiming it was, in effect, defrauded by Moriah Capital, LC, Agri Star asked for a jury trial and is alleging two types of breach of contract along with fraudulent inducement, fraudulent misrepresentation, negligent misrepresentation, and promissory estoppel.
Failed messiah was established and run in 2004 by Mr. Shmarya (Scott)Rosenberg. The site was acquired by Diversified Holdings, Feb 2016.