With Locusts And Deer, Jerusalem Dinner Shakes Up The Kosher Kitchen

When 240 observant Jews sat down to the 18-course dinner earlier this month, they were served a veritable zoo of animals that were unlikely candidates to be eaten under traditional Jewish dietary laws, known as kashrut.

More than matzo balls: With locusts and deer, Jerusalem dinner shakes up the kosher kitchen 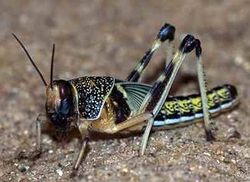 JERUSALEM (AP) — The men behind a unique six-hour eating marathon in Jerusalem want diners to know two things about locusts: First, they taste great stir-fried, and second, they're kosher.

When 240 observant Jews sat down to the 18-course dinner earlier this month, they were served a veritable zoo of animals that were unlikely candidates to be eaten under traditional Jewish dietary laws, known as kashrut.

Eating kosher, the organizers want to say, does not just mean chicken soup and matzo balls; the list of animals eaten by Jewish communities around the world throughout history is longer and stranger than most people think.

"It's about keeping a 2,500-year-old tradition in our hands," said Ari Greenspan, one of the organizers. "We have such a rich tradition but because of commercial food production, the only things slaughtered today are those that are financially feasible and grow quickly."

The biblical rules that govern Jewish diets include a blacklist of animals that may not be eaten, like pigs, vultures or fish without scales. Beef is kosher, pork is not. Trout is kosher, crab is not. Religious Jews abide by these rules to the letter, but probably wouldn't think to replace standards like beef or chicken with permitted alternatives like the water buffalo or pheasant served at the dinner.

The dinner's organizers — Greenspan, a dentist, and Ari Zivotofsky, a rabbi, both 47 — have spent decades investigating the nether reaches of the kosher kitchen.

The two met as teens in a Jewish religious school near Jerusalem. When they learned kosher slaughter, they realized the list of permitted animals was under threat because people were dying and taking little-known traditions with them. Some dietary directions not spelled out clearly in the Bible — particularly methods of poultry slaughter — must be passed down orally by a living witness, Greenspan said.

Without witnesses, more animals may go the way of the peacock. It was one of 30 birds pictured in a 150-year-old Italian book on kosher poultry, but no one alive remembers how to slaughter it in a kosher way, the organizers said. So today peacock is off the Jewish menu.

The two traveled to more than 40 countries, interviewing aging kosher butchers and documenting traditions like eating locusts, common among the Jews of Yemen.

The research culminated in the July 22 dinner.

A cadre of rabbis and academics explained each course to the diners. They also discussed long-running debates over the kosher status of some animals, such as swordfish, which was also served.

Zivotofsky read from a ruling by a 16th-century rabbi who said that swordfish has scales in water, meaning it is kosher, though the rabbi claimed the scales fall off when the fish is out of the water. That made it suspect enough that Zivotofsky wouldn't eat it at the dinner, though others did.

The organizers also restored a species to the kosher menu: the shibuta, a fish mentioned in the Talmud, the ancient commentary on the Bible that defines Jewish law. It is believed to refer to the Barbus grypus, a carp that grows in the Euphrates River. After the U.S. invaded Iraq, Greenspan said, he asked a military rabbi to confirm the fish was kosher. It was. At the dinner, shibuta from Turkey was served as a fried fish cake.

The locusts were nearly a disaster.

"We had someone raising them for us in Israel, but then there was a heat wave," Greenspan said. "They all died. We were up a creek. Locusts are the big hit of dinner." The organizers heard about an institution in Britain that grows insects, and Greenspan called a British cousin who brought the locusts to Israel in his suitcase.

Accountant Gadi Levin tore off the six legs of one of the brown locusts, about the length of his thumb, and bit into its crunchy body. Stir-fried, the locust was earthy and redolent with soy sauce.

"It was delicious," said the 37-year-old South African-born Israeli. "It tasted like a barbecue crisp."

With Locusts And Deer, Jerusalem Dinner Shakes Up The Kosher Kitchen

When 240 observant Jews sat down to the 18-course dinner earlier this month, they were served a veritable zoo of animals that were unlikely candidates to be eaten under traditional Jewish dietary laws, known as kashrut.
Failed messiah was established and run in 2004 by Mr. Shmarya (Scott)Rosenberg. The site was acquired by Diversified Holdings, Feb 2016.