The Skverer Rebbe met last week with Aaron Rubashkin and Rabbi Pinchos Lipschutz, and made a donation to Sholom Rubashkin's legal defense fund.

Many of you may remember that four leading Skver hasidim were convicted in 1999 of defrauding federal government programs out of $30 million dollars that were then used to support Skver institutions. (Two other Skverer hasidim fled indictment.)

99% of New Square, the Skverer village in New York, voted for Hillary Clinton in her first bid for the US Senate. Shortly thereafter, her husband commuted the sentences of those four Skver hasidim: 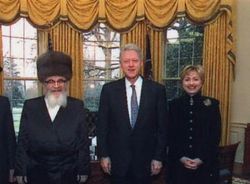 Four Hasidic men from New Square, Benjamin Berger, Jacob Elbaum, David Goldstein, and Kalmen Stern, created a nonexistent Jewish school to receive $30 million United States dollars of education grants, subsidies, and loans from the U.S. Federal Government.[10]  The men were convicted in 1999. In October of that year all four men received prison sentences ranging from 30 months to 78 months. Two other suspects who were indicted left the United States.[11]  Hillary Clinton met with New Square-area Hasidic leaders as part of her senate campaign. Michael Duffy and Karen Tumulty of TIME said that "as far as anyone knows, that was a campaign event only; no pardons were mentioned." Hillary Clinton attended another session with the men, who wanted to see the four Hasidic leaders released. After Hillary Clinton was voted in as a senator, during the morning of December 22 [the Skverer Rebbe Rabbi David] Twersky and an associate visited Bill Clinton in the White House Map Room in Washington, D.C. and asked him to pardon the four men. Hillary Clinton attended the meeting; she said that she did not participate in it and did not discuss the meeting with her husband.[12]  On January 20, 2001 President of the United States  Bill Clinton commuted the sentences of the men; Berger's sentence became two years and the other men each had 30 months. Federal prosecutors investigated the pardons to see if they were made in exchange for political support.[11]  A 2001 ABC News article stated that some people wondered whether the pardons occurred as a kind of favor because the Village of New Square had voted overwhelmingly for Hillary Clinton for her first senate term (1359 out of 1369 votes) or if the pardons occurred as part of a quid pro quo swap for votes.[10][12]  Hillary Clinton said that she was not involved in the pardons and that her husband pardoned the men out of clemency.[11]  In 2002 the prosecutors closed the investigation with no action.[13]

The Skverer Rebbe is known as a political fixer. He is also the nearest living descendant of the founder of the hasidic movement, the Bal Shem Tov. 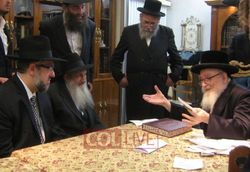 The Skverer Rebbe, Rabbi Duvid Twersky, has donated towards the substantial legal bills of Sholom Mordechai Rubashkin as his attorneys appeal an unusually severe sentence of 27 years in prison.

The undisclosed donation was given following an extensive fundraising drive to assist the former manager of the Agriprocessors meat plant in Postville, Iowa, found guilty on financial fraud charges.

They were warmly greeted at his home and were joined by Rabbi Pinchos Lipschutz, publisher and editor of Yated Neeman newspaper, who is leading fundraising efforts, and Rabbi Zvi Boyarsky of the Aleph Institute.

The meeting was held at 12:45 AM following a rally in support of Rubashkin in the main Beis Midrash of the village. Chaired by Yisroel Spitzer, the Vice Mayor of New Square, over 600 people attended.

"He took great pride in the contributions of his Chasidim to the effort," Lipschutz told COLlive.com.

"Even though by the time the rally was over it was very late, the Rebbe spent much time with us, offering wise counsel, brachos, and support," he added.

The Skverer Rebbe met last week with Aaron Rubashkin and Rabbi Pinchos Lipschutz, and made a donation to Sholom Rubashkin's legal defense fund.