An arranged marriage gone awry may have caused the dispute that led to the death of two Haredi men in an apparent murder-suicide in Tel Aviv on Wednesday, friends of the deceased said yesterday.

An arranged marriage gone awry may have caused the dispute that led to the death of two Haredi men in an apparent murder-suicide in Tel Aviv on Wednesday, friends of the deceased said yesterday.

Ohad Rosenberg and Eliyahu Aberman were found shot in a car in Tel Aviv's Montefiore neighborhood. They were laid to rest yesterday.

Police investigating the case believe that Rosenberg, 31, shot Aberman and then turned the gun on himself. Associates of both men denied that the two were engaged in a romantic affair.

Friends of Rosenberg said he was depressed in recent weeks after an arranged marriage with a woman in Aberman's Hasidic sect did not go through. The associates said Rosenberg, who in recent months made every effort to ensure that the wedding would take place, suspected that Aberman's family sabotaged the deal.

"His dream was crushed to pieces," said Moshe Gomro, Rosenberg's boss at the ZAKA rescue organization, where he worked for the last year and a half.

"He came to me quite shaken emotionally. He told me that the would-be bride's family did a thorough check on him with the Hasidic heads and that negative things were said about him. He said his name had been besmirched due to fabricated stories from the past, so the match fell apart."

Rosenberg was also said to be angry with Aberman because he had allegedly reneged on an agreement over the use of Rosenberg's car. Due to health issues, Rosenberg had agreed to allow Aberman to use his Fiat on condition that Aberman agreed to drive Rosenberg whenever he needed to run errands or meet with potential brides.

Last week, Rosenberg was scheduled to meet with the Hasidic woman he was due to marry. When Aberman failed to show up, Rosenberg tried to reach him for hours, but without success.

"Ohad was totally bitter because of this," Gomro said. "He felt that Aberman did not abide by their agreement on purpose, and this is why he didn't answer the telephone. I always tried to get him to leave the Aberman family alone, but he clung to the belief that they were trying to undermine him in anything he did." 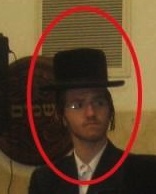 After the two men cut ties, Aberman sent a tow truck carrying the Fiat back to Rosenberg. Aberman had complained that the car's engine overheated.

"Ohad was furious over what he claimed were missing items from the car, esoteric things that cost somewhere between NIS 200 and NIS 300," Gomro said.

"I tried to calm him down and he said to me: 'These people are ruining my life.' I told him to look for a different Hasidic sect in which perhaps it would be easier to find a match. I saw how totally frustrated he was, but to think that it would escalate to killing? Nobody even considered this possibility."

On Wednesday, the two men took a drive in the car for a reason that has yet to be determined. Rosenberg took with him a licensed gun he possesses because of his work as a security guard in Rishon Letzion.

Police believe that Rosenberg shot Aberman at around 8 P.M. and then shot himself. It remains unclear whether the shooting was premeditated or whether an argument took place beforehand.

Relatives mourn Haredi man suspected of Tel Aviv murder-suicide
At Ohad Rosenberg's funeral, those close to the suspected shooter say he carried out a vendetta against his acquaintance, a member of a known Haredi family.
By Yaniv Kubovich • Ha'aretz

A Haredi man suspected of shooting an acquaintance in an alleged murder-suicide case in Tel Aviv's was put to rest Thursday afternoon in Rishon Lezion .

The two men, Eliyahu Aberman (19) and Ohad Rosenberg (31), both volunteers with the ZAKA rescue organization and the police, were found dead in a vehicle in  Tel Aviv's Montefiore neighborhood late Wednesday night, with a gun found next to them in the vehicle.

At the Rishon Lezion funeral, sources close to Rosenberg, who police suspect shot Aberman to death before killing himself, said that Rosenberg "carried a vendetta against the Aberman family and maintained that they were trying to ruin his life."

During the course of the funeral, Rosenberg's brother produced a letter that he had left to be found after his death. In it, he asked for forgiveness from his parents and sent them kisses. Family members prevented the brother from continuing to read the letter.

"We treated him like one of the family, and now look what's he's done." Ohad Rosenberg's mother said of Eliyahu Aberman, who was shot to death. "People say they are a family of saints. You call this saintly? We forgive you for everything."

Moshe Gamro, Central Region Commander of ZAKA, who knew Rosenberg when he performed a year of national service with the organization, said that "recently, he was very bitter because he was still unmarried, after a recent arranged relationship ended unsuccessfully."

He added that Rosenberg attempted to find out why the match didn't work out, and he learned that the woman's family had turned to the Aberman family community, who had apparently spoken poorly of his character.

Eliyahu Aberman, who is thought to have been shot to death yesterday by Rosenberg, had told Gamro that the two had argued over the car that the two were found dead in yesterday.

Two weeks ago, Rosenberg tried to reach Aberman to take back the car for an arranged date in Jerusalem, but Aberman didn't answer his call. "Every time Rosenberg called, Aberman ignored his calls. Roseberg would then call from other phones, and then Aberman would answer finally him, but come up with excuses for why he could not bring him the car," Garmo said.

Last week, Aberman sent the car back to Rosenberg, missing a few personal items. "That was a serious blow to their relationship. From Rosenberg's perspective, the Aberman family was trying to hurt him personally," Gamro added.

Over the course of the funeral, those in attendance claimed that the aforementioned letter was written yesterday before Rosenberg left the house, which raises suspicions that what transpired was premeditated. Rosenberg worked at a security firm in Rishon Lezion, which is where he acquired the gun that he is suspected of using to shoot Aberman and himself yesterday.

Posted at 01:00 AM in Crime, Litigation, etc., Haredim, Israel | Permalink

An arranged marriage gone awry may have caused the dispute that led to the death of two Haredi men in an apparent murder-suicide in Tel Aviv on Wednesday, friends of the deceased said yesterday.
Failed messiah was established and run in 2004 by Mr. Shmarya (Scott)Rosenberg. The site was acquired by Diversified Holdings, Feb 2016.