According to the law, restaurants in Israel must close on the eve of Tisha B'Av. Seemingly, this is another act of religious coercion joining the lack of public transportation on Shabbat, the dearth of options to hold a civil marriage, and more. But is this really coercion, or just an erroneous conception of the holiday on our part, the seculars? 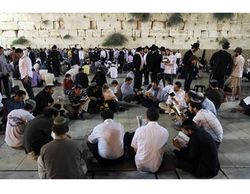 According to the law, restaurants in Israel must close on the eve of Tisha B'Av. Seemingly, this is another act of religious coercion joining the lack of public transportation on Shabbat, the dearth of options to hold a civil marriage, and more. But is this really coercion, or just an erroneous conception of the holiday on our part, the seculars?

The events that took place, according to tradition, on Tisha B'Av are as follows: The destruction of the First and Second Temples, which resulted in the dispersal of the Jewish people from the Land of Israel; the ruling that the Israelites in the desert would not be allowed into the Land of Israel for 40 years after the spies' report of the land; the fall of Beitar during the Bar-Kochva revolt; the Roman destruction of Jerusalem; and the expulsion of the Jews from Spain during the Inquisition.

All of the events marked on Tisha B'Av are then all the most difficult events to have befallen the Jewish people from a national perspective. Some of them do bear religious significance.

During the exile, in the absence of a country, there was no way of developing a state ceremony to mark the destruction of the Temples. Instead, traditions of mourning were adopted by individuals. In our times, traditions undertaken by the individual are viewed as part of religion, while state-wide ceremonies are viewed as a way of commemorating national events. This is one of the reasons why most people today who mark Tisha B'Av are religious or traditional.

Upon its inception, Zionism sought to establish the image of a strong and proud Jew. To this end, the Bible was glorified as it encapsulated a period in which the nation of Israel enjoyed independence in its own land. Such glorification served to justify the settlement of the land in light of the historical connection between the Jewish people and the land described in the Bible. However, one of the side effects of such glorification was a disconnect by Jewish historical sources from the period following the canonization of the Biblical text.

Even today, no Jewish text written after the Bible and before Bialik is taught in the state school system (except for medieval poetry in the literature study track). Indeed, there is a sort of hole in the history of the Jewish people between exile and Herzl. Therefore, many secular Israelis do not have a sequential perception of Jewish history. For many, there is biblical history and Zionism, nothing in between.

As such, from the secular perspective, the events commemorated on Tisha B'Av occurred during the nation's "past life," and not as part of a sequential historical continuum. This is another reason why the vast majority of people who place importance on marking Tisha B'Av are religious, as only they learned Jewish history and thought during the exile, and thus maintain a conscious continuum.

This is what happens when ancient memorial days are automatically perceived by many seculars as "religious," while memorial days from the modern period, such as Holocaust Memorial Day, are seen as "national." In actuality, Tisha B'Av, just like Hanukkah and Purim, are much closer idea-wise to Independence Day and Holocaust Memorial Day than to holidays like Passover and Sukkot.

This is strengthened by the fact that Tisha B'Av is a holiday set by community traditions in order to mark historical events and is not stipulated by a Torah commandment.

No one needs to coerce the secular public to close restaurants on Holocaust Memorial Day. The Holocaust is close enough to us so as not to be perceived as a disaster from the distant past or as a "religious" disaster. Menachem Begin suggested marking Holocaust Memorial Day on Tisha B'Av along with all the other horrible disaster that befell the Jewish people on that date. However, Ben Gurion decided on the date of the Warsaw Ghetto Uprising, which symbolized for him the very embodiment of Jewish heroism (albeit two weeks off because the uprising broke out during Passover).

If it weren't for the ignorance surrounding the destruction of the temples and the serious national implications it had for the Jewish people, closing restaurants on Tisha B'Av would not be seen as religious coercion. This is part of our people's painful past.

The feeling of religious coercion that encompasses the day must evoke serious self-examination among the secular public regarding its knowledge of our people's past.

Especially because many secular people have broad general educations, it is a particular shame that only a scant few are knowledgeable of Jewish sources and history. It seems as though the words of Yaakov Hazan, a Mapam leader, are more relevant than ever: "We wanted to raise a generation of epicureans, but instead we raised a generation of simpletons."

Noam Talmor is a student of education, politics, and government at Ben-Gurion University. He is secular and a graduate of The Israeli Academy for Leadership at Ein Prat.

I'm appending an article on the results of a poll on this issue that shows Talmor doesn't really know what he's talking about.

Breaking down the responses based on religious affiliation shows that a majority of all sectors either fast or, at the very least, respect the tradition of mourning on Tisha B'Av by not engaging in recreational activity.

Poll: 74% follow Tisha B'Av tradition
Ynet-Gesher poll reveals some 22% of Israelis will fast on commemoration of destruction of First and Second Temples; another 52% will honor day by not going out with friends
Ynet

Keeping with tradition: A majority of the Jewish public declared that they intend to fast or, at the very least, to avoid going out with friends on Tisha B'Av, the day marking the destruction of the First and Second Temples, according to a Ynet-Gesher poll conducted ahead of the holy day.

As part of the self-examination and introspection of "unfounded hatred" (sinat hinam) within Israeli society, the reason Jewish tradition cites as the reason for the destruction of the Temple, Arabs, haredim, settlers, and Tel Avivians compete for the title of "the most hated" in Israel 2010.

The poll was conducted by market research company Panels and surveyed 505 respondents statistically representative of the adult, Hebrew-speaking population in Israel living in Jewish towns. The maximum sampling error is 4.4%±.

The first question asked was: "If it were permissible by law to open recreational spots on the eve of Tisha B'Av, would you go out to have fun?"

Fifty-two percent of the respondents said they would forego recreational activity on this day even though they do not fast, whereas 22% responded that they fast and therefore would not go out in any case. Another 18% responded that they would go out on the eve of the fast day and labeled the current legal status "religious coercion." Another 8% declined to answer.

Breaking down the responses based on religious affiliation shows that a majority of all sectors either fast or, at the very least, respect the tradition of mourning on Tisha B'Av by not going engaging in recreational activity.

In response to the question "Which among the following groups in your opinion is the most hated in Israeli society?" 54% chose Arabs, 37% chose haredim, 8% chose religious, and 1% chose Tel Avivians. An analysis of the data reveals that the haredim themselves believe that they are the most hated, whereas religious, traditionalists, and seculars responded that Arabs are more hated.

The poll also asked the respondents to indicate honestly which of the four groups is the least liked by them personally. Arabs topped the list with 52% and haredim were in second place with 32%. Some 11% responded they least like settlers, and 5% said they least like Tel Avivians. A breakdown of the results shows that haredim, religious, and traditionalists mainly dislike Arabs, whereas seculars mainly dislike haredim.

In conclusion, the poll posed the question: "Tisha B'Av symbolizes 'unfounded hatred.' What, in your opinion, is the worst source of tension in Israeli society?" To this question, 42% indicated the religious-secular issue and 41% indicated the Jewish-Arab issue. Nine percent believe that tension between settlers and the rest of the country is the largest source of tension, and 8% responded the tension between rich and poor.

The haredi public is the only sector in which a vast majority believes the religious-secular issue to be the most significant source of tension in Israelis society. Traditionalists also indicated the religious-secular divide, though this option received less than half of the votes. Seculars indicated the tension between Jews and Arabs, and religious were divided between the two.

Ilan Geal-Dor, a member of Gesher's board, responded to the findings. "The haredim, from within the Jewish population of the State of Israel, are the most hated. Furthermore, a majority of the public feels as though the tension between haredim and seculars is the worst source of tension, even more than with Arabs. We at Gesher believe that efforts must be invested internally to grapple with a growing haredi society that is not an integral part of Israeli society," Geal-Dor said.

According to the law, restaurants in Israel must close on the eve of Tisha B'Av. Seemingly, this is another act of religious coercion joining the lack of public transportation on Shabbat, the dearth of options to hold a civil marriage, and more. But is this really coercion, or just an erroneous conception of the holiday on our part, the seculars?
Failed messiah was established and run in 2004 by Mr. Shmarya (Scott)Rosenberg. The site was acquired by Diversified Holdings, Feb 2016.