Rabbi Yitzhak Shapira, head of the Od Yosef Hai Yeshiva, released from police custody hours after being arrested for encouraging the killing of non-Jews. 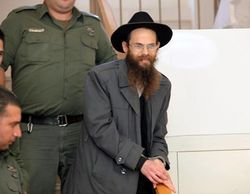 Police released the head rabbi of a prominent yeshiva yesterday hours after arresting him for encouraging to kill non-Jews.

Rabbi Yitzhak Shapira, head of the Od Yosef Hai Yeshiva and author of "The King's Torah," was arrested early yesterday morning at his home in the West Bank settlement of Yitzhar. His book describes how it is possible to kill non-Jews according to halakha (Jewish religious law ).

Detectives first carried out a search at the yeshiva, where they confiscated 30 copies of the book. The investigation and arrest were carried out on the orders of Deputy State Prosecutor Shai Nitzan.

The preface of the book, which was published in November, states that it is forbidden to kill non-Jews - but the book then apparently describes the context in which it is permitted to do so.

According to Shapira, it is permissible to kill a non-Jew who threatens Israel even if the person is classified as a Righteous Gentile. His book says that any gentile who supports war against Israel can also be killed.

Killing the children of a leader in order to pressure him, the rabbi continues, is also permissible. In general, according to the book, it is okay to kill children if they "stand in the way - children are often doing this." "They stand in the way of rescue in their presence and they are doing this without wanting to," he writes. "Nonetheless, killing them is allowed because their presence supports murder. There is justification in harming infants if it is clear that they will grow up to harm us. Under such circumstances the blow can be directed at them and not only by targeting adults."

The daily Maariv's report on the book was immediately followed by calls for Shapira's arrest and a petition was filed with the High Court of Justice for a ban on the book's distribution. The petition was rejected as premature.

The rabbi's arrest has stirred angry responses on both the left and right. "The police did well to initiate an investigation," attorney Lila Margalit of the Association for Civil Rights in Israel said. "Incitement for racist violence seriously undermines human rights and it should not be ignored. However, it is not entirely clear whether the arrest was justified in this case."

She added that the tendency in Israel is to "overuse" arrests, and in cases where there is no justification for it.

A spokesman for Yitzhar said: "Once more we are seeing rabbis being gagged and serious damage inflicted to their honor, along with the razing of homes in the settlements."

Rabbi Yitzhak Shapira, head of the Od Yosef Hai Yeshiva, released from police custody hours after being arrested for encouraging the killing of non-Jews.