Three days before the 2008 Agriprocessors raid, a lawyer hired by Rubashkin asked in writing that the local prosecutors and immigration authorities do precisely what is now the “new strategy.” The request was immediately rejected, and the rejection was even acknowledged by a local immigration official in testimony during Rubashkin's recent federal trial.

Op-Ed: One Standard Of Justice?
by Nathan Lewin 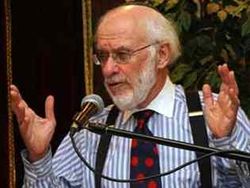 A front-page story in The New York Times of July 10 reported that federal immigration authorities in the Obama administration have adopted a “new strategy” to replace the military-style raids that were conducted in the Bush years to find and arrest illegal aliens.

One such raid, carried out in May 2008, destroyed Agriprocessors, the country's largest kosher meat-packing plant, and resulted in criminal charges that culminated in a 27-year sentence for Sholom Rubashkin, the principal manager of the Postville, Iowa, plant. The Rubashkin raid netted 389 Hispanics who had gotten their jobs with false documentation. They were arrested, quickly prosecuted, and then deported.

According to the Times, the “quieter enforcement strategy” is to have federal agents “scour companies' records for illegal immigrant workers” and then tell the employers to fire those who are not properly documented. Three days before the 2008 Agriprocessors raid, a lawyer hired by Rubashkin asked in writing that the local prosecutors and immigration authorities do precisely what is now the “new strategy.” The request was immediately rejected, and the rejection was even acknowledged by a local immigration official in testimony during Rubashkin's recent federal trial.

Apart from not being raided, have the employers of illegal aliens been treated by federal law-enforcement authorities differently from how Rubashkin was treated? The Times reports that a family-owned fruit-grower company in the State of Washington named Gebbers Farms was found in December 2009 to be employing more than 500 illegal Mexican aliens. Gebbers fired these employees just before Christmas.

The federal prosecutors promptly added to the immigration charges they filed against Rubashkin the claim that he committed bank fraud because the loan agreement he signed with the bank that advanced a line of credit to Agriprocessors represented that he was “in compliance with the law.”

If the United States Attorney for Washington treats the Gebbers the same way Rubashkin was treated, one or more members of the Gebbers family should be arrested and charged not only with immigration violations but, if the Gebbers had any bank loan, with bank fraud as well. The representation that the borrowing company is complying with the law is standard “boilerplate” language in bank-loan documents. The Gebbers' loan papers should be scrutinized to see if they contain a similar representation.

And, of course, if the Gebbers are treated on a par with Rubashkin, one or more members of the family should be released before trial on any criminal charges that may be filed only if they post a one-million-dollar bond and have their freedom to travel limited by an electronic ankle bracelet. If they plead guilty or a jury returns a guilty verdict, they should be immediately imprisoned, as Rubashkin was.

Any potential federal indictments against the Gebbers should, like Rubashkin's, allege that a separate federal crime was committed with each illegal alien and with each draw on a line of credit. If the Gebbers are treated as Rubashkin was treated, their indictment will easily exceed the 163 counts in Rubashkin's indictment.

If a member of the Gebbers family is found guilty of the federal charges, will the federal prosecutor for Washington demand that he or she receive a 25-year prison sentence? Will the sentencing judge add several years to the prosecutor's recommendation, as Judge Linda Reade of the federal court in Iowa did in Rubashkin's case?

Other recent illegal-immigration cases, some described in the Times article, are worth comparing with Rubashkin's. Several restaurant owners who paid their employees in cash and requested little or no documentation of legal status have recently pleaded guilty. George Anagnostou, the owner of two restaurants in Maryland, made a considerable profit from his restaurants, enabling him to purchase two cars, a Harley-Davidson motorcycle, and two homes. His illegal-alien employees were paid in cash and many worked up to 80 hours a week.

Yen Wan Cheng hired aliens from Honduras for her Maryland restaurant. She admitted in a plea agreement that she asked for no proof whatever of proper immigration status. The illegal employees lived together in a house she owned, and she drove them to work each day in a van.

Rubashkin, unlike Anagnostou and Cheng, did have a procedure in which applicants for jobs were screened to weed out illegal aliens. In fact, immigration officials acknowledged in a sworn affidavit that an undercover federal agent was rejected twice for a job at Agriprocessors because his documentation was inadequate. And all the Agriprocessors employees were paid by check, with proper deductions for taxes. Nonetheless, prosecutors threw the book at Rubashkin.

Anagnostou and Cheng have both pleaded guilty and will be sentenced in the fall. Unlike Rubashkin, they were released on bail pending their sentences. The likelihood is that neither will serve any time in prison, and if they do it will surely not exceed one year or two. And there is no indication that prosecutors have scrutinized any bank loan records of either of them to see if false representations were made.

Is this a nation of “equal justice under law”?

Nathan Lewin is a Washington attorney who is the lead appellate counsel for Sholom Rubashkin.

As we all know, the Obama Administration changed the government's enforcement of immigration law. But that change does not mean crimes committed under previous administrations must now be retroactively judged and punished using the new Obama standard.

Past that very obvious point, Lewin omits key pieces of data that undermine his argument.

A brief and by no means inclusive list of these Lewin lies by omission:

• Rubashkin received hundreds of no match notices from the federal government in the months before the May 12, 2008 immigration raid, indication that many of his workers were illegal aliens. But Rubashkin did not act on those no match notices.

• 3 days before the raid, when Rubashkin was suddenly telling the federal government that he wanted to cooperate, he was also involved in a conspiracy to cover up his crimes and another conspiracy to provide his illegal workers with new false IDs and false green cards. No one else mentioned in Lewin's piece is accused of doing anything like this.

• Bank fraud is calculated by 1) the fraudulent statement(s) and, 2) the amount of loss suffered by lenders. If a person made a dozen false statements but the lenders suffered no loss, the crime is punished very lightly. If a person made one false statement but the loss suffered by lenders is $27 million, the person is punished severely. In the cases Lewin mentions, because the banks apparently suffered no loss, any conviction would probably not add to the offenders' sentences for immigration violations.

• Past that, Rubashkin lied about the amount of collateral and inflated its value. This caused a $27 million dollar loss to lenders and is the main part of the bank fraud convictions. No one else mentioned in Lewin's piece is accused of doing anything like this.

• These are all federal crimes and, as such, are sentenced according to the federal sentencing guidelines – guidelines that make Rubashkin's bank fraud a very serious crime.

• The judge added 2 years to Rubashkin's sentence because he perjured himself in her court – not because she simply chose to exceed the sentence prosecutors asked for. Indeed, her 25 year base sentence was at the light end of the sentencing guidelines. Rubashkin could have received as little as 23 years or as many as 30 years under those guidelines, with the extra time for perjury added on top of that.

What Lewin is doing may help Rubashkin raise money – money that will be used in part to pay Lewin. But it does Rubashkin no favor past that. Indeed, it hurts him.

From at least 2003 onward, every bad decision Rubashkin made seems to have been made in consultation with Nathan Lewin, from his bizarre attacks on PETA that led to PETA's undercover videos of Agriprocessors' repeated and intentional – and horrific – violations of the Humane Slaughter Act, to Rubashkin's attacks on Conservative leaders, Lewin has been there to give Rubashkin bad advice.

While other Orthodox attorneys – Avi Moscowitz and Ben Brafman come readily to mind – have been up front in their warnings to haredim that the law of the land must be followed and respected, Lewin has consistently played the Al Sharpton role, inciting misbehavior rather than acting to stop it, and kashering every Rubashkin misdeed by crying antisemitism where none exists.

Lewin has done great damage to Rubashkin, and even greater damage to the haredi Jewish community he claims to love.

Three days before the 2008 Agriprocessors raid, a lawyer hired by Rubashkin asked in writing that the local prosecutors and immigration authorities do precisely what is now the “new strategy.” The request was immediately rejected, and the rejection was even acknowledged by a local immigration official in testimony during Rubashkin's recent federal trial.
Failed messiah was established and run in 2004 by Mr. Shmarya (Scott)Rosenberg. The site was acquired by Diversified Holdings, Feb 2016.