Distribution of free kugel to secular Israelis meant to encourage move to haredism and buy haredim some good PR at the same time. 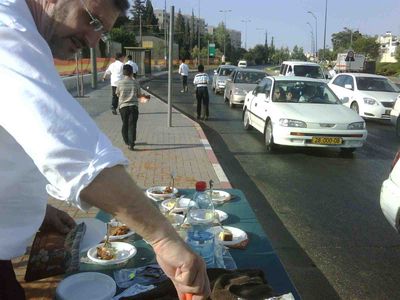 Haredim in Jerusalem have launched a new project meant to buy them some good public relations and, at the same time, attract new recruits to haredism.

Using young haredi children as couriers, haredim deliver free pieces of kugel to cars at the edge of Jerusalem on the road to Tel Aviv.

The project has reportedly been endorsed and blessed by Rabbi Chaim Kanievsky, a senior haredi religious leader.

Drivers and their passengers are blessed by the child couriers: "Your children should grow up to be haredim!"

The project is a close copy of something I was privileged to help found more than 23 years ago, The Soldiers Kiddush Fund, Keren Kiddush L'Hayalim – but with one important difference.

Keren Kiddush L'Hayalim made kiddush for the soldiers guarding the Kotel, Western Wall, every Friday night and Saturday morning. Ba'al teshuva yeshiva students – usually me with accompaniment of one of the two other founders, Charles (now Rabbi Charles) Lebow and Eric Epstein – took grape juice and cookies to the all the guard stations around the Kotel, making kiddush at each one.

One of my best memories of this is of a secular soldier who week after week defiantly refused both the grape juice and the cookie. One Friday night I stopped his unit and asked if anyone wanted to hear kiddush. The other soldiers started riding him and he turned to me, lit cigarette in hand, and said, "But I'm smoking a cigarette!" Meaning, in other words, that here I am in front of the Kotel and the Temple Mount, the holiest site in the world, and I'm breaking God's law by smoking on Shabbat and you want me to hear kiddush?!

One of the other soldiers took a cup of grape juice and made kiddush for the unit. Everyone answered amen and had some grape juice and a cookie, including the secular soldier, lit cigarette in hand.

For weeks after, I'd see that soldier. He often came looking for us. And, even though he smoked on Shabbat, when we saw him he was never smoking a cigarette.

Another fond memory is of a mesorati female soldier. It was her first Shabbat on duty and he first Shabbat away from her parents and family.

When we made kiddush for her she cried. She told us she was convinced that this would be the first Shabbat in her life that she would not hear kiddush, and then we showed up.

What we did was meant to be a thank you to the soldiers who worked on Shabbat and protected us so we could pray, eat and sing without fear.

Rabbis largely made fun of us. Even our own Aish HaTorah thought Keren Kiddush L'Hayalim was a big joke.

Most of that stopped the day Rabbi Motti Berger passed by a guard post while Keren Kiddush L'Hayalim was making kiddush for the soldiers there. He saw their reaction and suddenly, he told a friend of mine, understood what this was all about.

I tried to expand the project to the area near the old Edison theater during a time of haredi / secular strife, but the yeshiva's rabbis thought it too dangerous. Mea Shearim haredim would never understand, rocks would continue to fly, and we'd get hurt.

I spoke to the yeshiva's posek about it. I suggested we pitch the idea to Edah Charedit, the umbrella organization of Mea Shearim haredim, and get them to do it. You can't reason with these people, he replied. Believe me, I've tried.

It ran on an all volunteer basis for at least nine years. It may still be running in some form now, although I doubt it.

I ran Keren Kiddush L'Hayalim for the first seven months of that nine year run, until my year in yeshiva ended and I returned to the US.

It's nice to see haredim have finally seen the value in simple kindness, although it would be nice if that kindness came with no strings attached.

Distribution of free kugel to secular Israelis meant to encourage move to haredism and buy haredim some good PR at the same time.