Firefighters attempting to contain the fire reported that the flames were closing in on the nearby Hadassah Hospital, where police say dozens of cars caught alight in the hospital parking lot. Approach roads to the hospital were closed for several hours, except for ambulances.

Careless picnickers suspected of starting blaze near Jerusalem
Police initially suspected arson, but by early evening concluded that careless picnickers were to blame and detained a 15-year-old Haredi youth who had been playing with fire, together with several friends, in the forest; in separate fire, 18-month-old twins suffer smoke inhalation
By Liel Kyzer • Ha'aretz 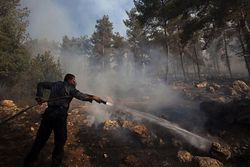 A massive forest fire broke out yesterday afternoon in the hills surrounding Jerusalem's Hadassah University Hospital, Ein Karem. Police initially suspected arson, but by early evening concluded that careless picnickers were to blame and detained a 15-year-old Haredi youth who had been playing with fire, together with several friends, in the forest.

Police suspect that the boy's school class left the site to tour the city without extinguishing the flames they had lit.

The blaze erupted at around 1:30 P.M. in the Aminadav Forest, just outside the capital's Ein Karem neighborhood. Firefighters attempting to contain the fire reported that the flames were closing in on the nearby hospital, where police say dozens of cars caught alight in the hospital parking lot. Approach roads to the hospital were closed for several hours, except for ambulances.

Police ordered hundreds of residents of nearby moshavim Ora and Aminadav to evacuate their homes, fearing the flames would reach them. Some 30 firefighting teams and five firefighting airplanes battled into the evening to control the blaze. Last night, Jewish National Fund officials estimated that over 1,000 dunams (about 250 acres ) of forest had already been incinerated.

Also yesterday, 18-month-year old twins were moderately injured from smoke inhalation after a fire broke out in an apartment building in the capital's Shmuel Hanavi Street, where a 3-year-old was also hurt.

Magen David Adom paramedic Ze'ev Hefetz said that firefighters extracted the twins "with soot marks around their noses and mouths," adding that the infants suffered from smoke inhalation, but not from burns. "When we arrived at the scene we saw the mother waiting upstairs," Hefetz said. "The fire must have erupted while the father was in the apartment along with the three children."

Hefetz said that the mother "was distraught, telling us her husband and children were inside the apartment. After we evacuated the twins the father and the third child turned up at the hospital with light smoke inhalation-related injuries."

The paramedic added that the twins were "fully conscious and were able to breathe independently" at the time of their evacuation to Shaare Zedek Medical Center.

Several teenagers were taken in for questioning in connection with a fire near the capital’s southwestern edge that destroyed 1,000 dunams (100 hectares) of forest, forced the partial evacuation of the moshavim of Ora, Aminadav and Even Sapir, and came close to doing the same for Hadassah University Hospital in Ein Kerem, Jerusalem police announced on Sunday night.

According to a police spokesman, students from a haredi school in the Jerusalem area were hiking near Ein Hamdak, inside the Aminadav Forest. Some of the students were apparently playing with fire and started the blaze, which got out of control. The group then allegedly left the scene and continued toward Jerusalem before being found by detectives from the Moriya District.

A 15-year-old was held for questioning, and police said they were planning to make more arrests.

The blaze, which was centered just southwest of Hadassah University Hospital, reached dangerously close to the medical center before it was brought under control.

Twenty-three vehicles in Hadassah’s parking lot were damaged by the fire, which was subdued near the hospital’s entrance only after two airborne firefighting units entered the scene.

As the flames crept closer to the hospital – at one point reaching its perimeter fence – roads leading to the medical center were shut down and a evacuation of the entire facility was considered. In the end, firefighters were able to control the blaze, at least in the hospital’s direction.

On the other side of the valley, however, near the three moshavim, the flames continued to burn out of control.

Police and firefighters were called in to battle the flames and evacuate some of the residents after the blaze drew closer and authorities told locals to leave. Four people were treated for smoke inhalation before firefighters were able to control the flames, which turned the green hills between Hadassah Ein Kerem and the moshavim a charred and smoky black.

“According to the information we now have, there are an estimated 1,000 dunams of planted-forest land in the Aminadav Forest that have been destroyed,” a spokeswoman from the Jewish National Fund told The Jerusalem Post on Sunday evening.

“The fire started at around 1:30 in the afternoon, near Ein Hamdak, inside the Aminadav Forest,” she said.

“Around 3:30 p.m., however, another fire started in an area called Khirbet Tze’adim, which is also in the Aminadav Forest. So at that point, there were two large fires burning out of control, which together caused significant damage.

“Around 100 JNF personnel, along with nine JNF firefighter teams, arrived at the scene and assisted the local firefighters who were in the field.

By 6 p.m., the flames had been brought under control throughout the entire area, and residents of the communities that were partially evacuated began returning to their homes,” she said.

The spokeswoman added that while this blaze had caused a great deal of damage, one that erupted on the Golan Heights three weeks ago claimed nearly 1,800 dunams of forest. At the time, the JNF said it would take about 50 years for that forest to recover.

Meanwhile, a separate fire on Sunday left 18-month-old twins in serious condition from smoke inhalation. The infants were inside an apartment on Shmuel Hanavi Street in Jerusalem’s Beit Yisrael neighborhood when the blaze broke out, also leaving a three-year-old lightly injured.

Firefighters arrived at around 2:30 p.m. and evacuated the children from the burning apartment.

According to a Jerusalem police spokesman, the twins were taken to the Shaare Tzedek Medical Center, and the cause of the fire was being investigated.

Posted at 08:05 AM in Crime, Litigation, etc., Haredim, Israel | Permalink

Firefighters attempting to contain the fire reported that the flames were closing in on the nearby Hadassah Hospital, where police say dozens of cars caught alight in the hospital parking lot. Approach roads to the hospital were closed for several hours, except for ambulances.