Dishonesty In The Name Of Science: Association Of Orthodox Jewish Scientists Hosts Anti-Gay Activist, Covers Up Abuse Allegations Against His Organization

A video of 2 young Orthodox men who complain of abuse at the hands of a JONAH therapist caused AOJS to cancel the appearances last weekend at AOJS's annual convention of JONAH founder Arthur Abba Goldberg and a doctoral student meant to rebut him. But in a last minute reversal, AOJS let Goldberg speak without any rebuttal. And no mention was made of the contents of the video.

A controversial treatment that is supposed to “cure” gays of their same-sex feelings — which has credence in parts of the Orthodox community — took another step toward respectability this week when it received apparent approval from a group of Orthodox scientists.

A recently posted YouTube video of two young Orthodox-raised men who complain of psychological abuse at the hands of a “reparative therapy” practitioner originally played a role in causing the Association of Orthodox Jewish Scientists to cancel the appearance last weekend of Arthur Goldberg, a leading advocate of reparative therapy, at the organization’s annual convention.

But, in a sudden reversal, the AOJS let Goldberg speak, in the convention’s final session on Sunday. Goldberg’s views apparently were not challenged — either from members of a hastily arranged panel or from the more than 100 people in the audience. And no mention was made of the contents of the video.

In the video, posted on YouTube two weeks ago by the gay activist group Truthwinsout.org, Ben Unger and Chaim Levin allege that Alan Downing, a “life coach” who serves as a therapist for JONAH (Jews Offering New Alternatives to Homosexuality), had them remove their clothes in front of a mirror — with Downing standing behind them — as part of therapy to change from gay to straight. Levin also states that Downing encouraged him to touch his own genitals “to increase my masculinity.”

Downing denied the allegations but did not offer an explanation of exactly what took place during the sessions. 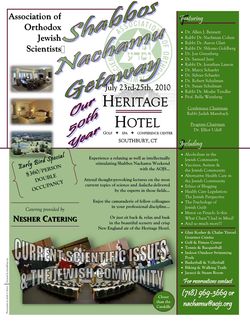 Unger, who says he spent two years with JONAH in an attempt “to ‘cure’ my homosexuality,” states that Goldberg had assured him that “we can turn you from gay to straight.” Downing is the only therapist mentioned in the video.

A link to the “JONAH’s ‘Ex-Gay’ Psychological Striptease” video was included in e-mail messages to leaders of the AOJS in the days before the annual convention, warning them against including Goldberg’s presentation on JONAH.

The messages warned that Goldberg, founder and co-director of the Jersey City, N.J.-based organization, has a criminal background, has misled clients about the therapy’s effectiveness and has employed people who use practices that border on abuse.

In response, AOJS leaders held an emergency meeting at midnight Thursday night. The result was that the invitations to Goldberg, and to an Orthodox doctoral student who was to deliver a rebuttal to Goldberg’s presentation, were rescinded. But Goldberg, who unexpectedly showed up at the convention, in Southbury, Conn., was allowed to speak, at the urging of several convention attendees who were interested in his topic.

“We do not make [scheduling] decisions based on YouTube. Anybody can put anything on YouTube,” Dr. Elliot Udell, AOJS program chairman, said of the decision to let Goldberg speak.

To put his descriptions of JONAH’s work into a religious and scientific context, AOJS had Goldberg share the podium with three Orthodox men who have backgrounds in mental health fields and the sciences.

Goldberg gave “a pep talk — no statistics, no science, no [therapeutic] techniques,” said Rabbi Moshe Tendler, a former AOJS president who serves as the organization’s halachic adviser and spiritual guide. Goldberg, the rabbi said, cited supportive biblical verses and conducted a telephone interview with an anonymous male who identified himself as a satisfied client of JONAH.

AOJS was open to Goldberg’s views, Rabbi Tendler said, because Goldberg presented his work as based on the belief “that someone has the ability to repent and to change. Reparative therapy is known in our tradition as repentance or teshuvah.”

Rabbi Tendler said he never viewed the critical video or heard what was in it. Had he known of the charges that Goldberg sanctioned practices that “are against halacha … he would not have spoken,” Rabbi Tendler said.

JONAH has helped “thousands of men, women, spouses and families,” Goldberg told The Jewish Week in an e-mail interview. “Since we only work with those who have unwanted same-sex attractions, we prefer thinking of the work as helping someone strengthen their concept of self and change their sexual attractions. ‘Cured’ is an inappropriate term as it makes homosexual issues appear to be a sickness.”

Goldberg stood by Dowling’s technique as described by Levin and Unger in the YouTube video, saying, “The video misrepresents common therapeutic techniques used by many types of practitioners who work with men with body image wounds and shame; they are often very successful.”

At the conference, Goldberg received a polite reception, with many of the audience buying copies of his book, “Light in the Closet: Torah, Homosexuality, and the Power to Change,” after the speech, an AOJS official said.

An organization like JONAH that does not employ certified mental health professionals “has no accountability,” and is not subject to peer review or lawsuits when professional standards are violated, said Eric Harari, a doctoral student at Fordham University who was to give the rebuttal to Goldberg’s presentation.

Goldberg’s “unopposed” speech about JONAH was “bad science … and bad religion,” said Rabbi Steven Greenberg, author of “Wrestling with God & Men: Homosexuality in the Jewish Tradition” (University of Wisconsin Press, 2004), who did not attend the AOJS convention.

The first Orthodox rabbi to publicly identify himself as gay, Rabbi Greenberg says JONAH’s claims that therapy can eliminate homosexuality appeals to “Jews who would prefer to see it as a curable disease.”

The AOJS panel, seven months after a historic public forum at Yeshiva University that featured gay students and alumni from the school, is the latest sign of increased interest in the Orthodox community about homosexual Jews who seek to maintain their ties to their families and Judaism.

Most experts say it is not effective, many health care professionals say it can be harmful, and some Orthodox organizations support it.

“Not only is it not going to work” — especially with individuals who have felt a same-sex attraction their entire life — “but it makes the person worse,” says Dr. Samuel Klagsbrun, a psychiatrist who often treats clients from the haredi community.

However, support for reparative therapy remains in parts of the haredi and Modern Orthodox communities.

The JONAH website includes recommendation from the Rabbinical Council of America, the central organization of Modern Orthodox rabbis, and from the Jerusalem branch of Aish HaTorah, a prominent outreach yeshiva.

Neither the RCA nor Aish HaTorah responded to a question from The Jewish Week about whether, in light of the new video, they still endorse JONAH.

“Some individuals … who are greatly troubled by homosexual desires and thoughts … turn to psychotherapists in the hopes that their feelings and desires can be modified,” said Rabbi Simcha Feuerman, president of Nefesh International, a network of Orthodox mental health professionals. “While not conclusive, there is some research to support certain modalities of therapy for some individuals.”

Rabbi Tzvi Hersh Weinreb, a psychotherapist and executive vice president emeritus of the Orthodox Union, said he has “reached no conclusions” about the efficacy of reparative therapy. “I have spoken extensively to Orthodox or formerly Orthodox gays and lesbians,” the rabbi said in an e-mail message, “and have heard a range of attitudes, emotions and reports on therapeutic successes or failures.”

“Since 2000,” according to the JONAH website, “JONAH has provided resources, referrals, mentoring and coaching services, group support, Shabbatons, seminars and outreach to thousands of impacted individuals.”

The website does not offer a staff directory, but online articles and interviews with Levin and Unger do not refer to any JONAH therapist other than Downing.

According to the Truth Wins Out website, Goldberg was disbarred in New Jersey and sentenced to 18 months in prison in 1987 for investor fraud, and Downing is an “’ex-gay’ life coach … who admits he is still attracted to men.”

Downing, who declined to be interviewed, said in a statement: “Regarding the video recently posted by two men identifying themselves as former clients of mine, I deny the allegations of malicious intent that are made in this video. I also emphatically deny the falsehoods being promulgated by activists and commentators; their accusations are not true. I am deeply concerned about the use of these young men to advance a political agenda, and the impact this publicity will have on them. I plead with those who choose to use them in this way to put their well being ahead of political goals.”

Udell, the conference’s program chairman, said the organization was not aware of the controversy surrounding JONAH and reparative therapy when Goldberg approached it earlier this year, offering to speak.

The 60-year-old organization, which numbers several hundred scientists and physicians among its members, agreed to hear Goldberg because of interest in the homosexual issue, which has become increasingly visible in Orthodox circles in recent years.

Many Orthodox families whose children have spoken of homosexual feelings are referred to JONAH, which calls itself “the only Jewish-based organization specifically dealing with the healing of homosexuality,” Udell said. “A lot of rabbis [in yeshivot and day schools] have sent their students to JONAH. We feel it was important to air [JONAH’s] point of view.”

He and other AOJS leaders vetted JONAH by reading its website and speaking with people who said they were satisfied with their experiences as its clients, “but we didn’t realize it was going to be controversial.”

Goldberg’s appearance at the convention did not constitute AOJS support of JONAH, Udell said. “It wasn’t a scientific presentation,” hence did not require the standard of empirical proof that other speeches at a scientific gathering usually have.

Dishonesty In The Name Of Science: Association Of Orthodox Jewish Scientists Hosts Anti-Gay Activist, Covers Up Abuse Allegations Against His Organization

A video of 2 young Orthodox men who complain of abuse at the hands of a JONAH therapist caused AOJS to cancel the appearances last weekend at AOJS's annual convention of JONAH founder Arthur Abba Goldberg and a doctoral student meant to rebut him. But in a last minute reversal, AOJS let Goldberg speak without any rebuttal. And no mention was made of the contents of the video.
Failed messiah was established and run in 2004 by Mr. Shmarya (Scott)Rosenberg. The site was acquired by Diversified Holdings, Feb 2016.