Her husband, Marc Mezvinsky, who is Jewish, wore a yarmulke and prayer shawl. 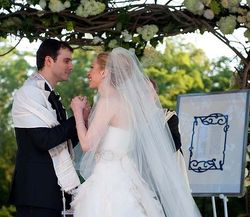 NEW YORK (JTA) -- Chelsea Clinton was married under a chuppah in a ceremony co-officiated by a rabbi.

Rabbi James Ponet, head of the Joseph Slifka Center for Jewish Life at Yale, was joined by Rev. William Shillady, a Methodist minister. Clinton and the groom, Marc Mezvinsky, reportedly were married under a chuppah, in a ceremony that featured friends and family reciting the seven traditional blessings and a ketubah, the traditional Jewish wedding contract. The event took place Saturday night before the end of the Jewish sabbath.

Mezvinsky, who is Jewish, wore a yarmulke and prayer shawl.

Ponet, a Reform rabbi, has been the Jewish chaplain at Yale since 1981. He currently teaches a college seminar with Dr. Ruth Westheimer on “The Family in the Jewish Tradition," according to the bio on the Slifka Center website. He and his wife, Elana, also "lead a weekly discussion in Slifka Dining Room on the value of peace in Jewish life and thought."

Her husband, Marc Mezvinsky, who is Jewish, wore a yarmulke and prayer shawl.