Chabad hasid David Sitbon is under arrest for stealing weapons from the IDF and giving them to Haim Pearlman to use to murder Arabs.

David Sitbon to be Sent Home Under House Arrest
Shmais.com

David Sitbon, the Chabad Chassid arrested on suspicion of abetting right-winger Chaim Perlman, will be sent home for a nine-day stretch under house arrest.

The house arrest order was handed down by the Magistrate’s Court in Petach Tikvah.

As we previously reported, Sitbon was arrested on suspicion of possessing an unlawful weapon, breaking into a private home, and stealing weapons. But the main count was his friendship with Chaim Perlman 14 years ago. 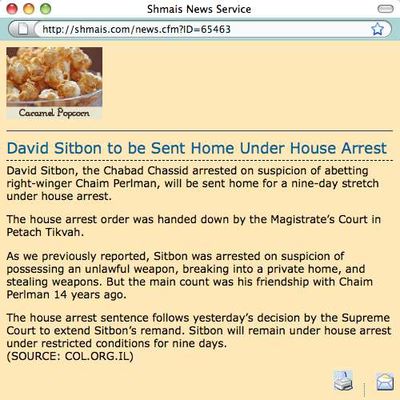 What exactly is Sitbon accused of? Stealing weapons for Pearlman, who used them to murder Arabs: 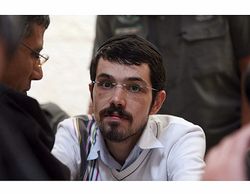 Up until a week ago, David Sitbon was not allowed to meet with his lawyer, yet on Thursday he's been released to house arrest.

The Petah Tikva Magistrate's Court sent Sitbon to 10 days of house arrest under restrictions. Sitbon is suspected of aiding "Jewish terrorist" Haim Pearlman by breaking into an IDF base and stealing weapons, which were later handed over to Pearlman. Pearlman is suspected of murdering four Arabs.

Meanwhile, judges extended Pearlman's remand until Wednesday of next week.

Responding to the court's decision, Sitbon's attorney Ariel Atari said: "My client categorically denies all allegations against him and the court has realized that his acquaintance with Pearlman is an old one, dating back 14 years."

Attorney Atari only met with Sitbon last Friday, after Justice Edmond Levy accepted a petition allowing both Sitbon and Pearlman to meet with their lawyers. Also last week, Sitbon's parents were held for questioning at Ben-Gurion Airport. Relatives said the arrest was made in an effort to press Sitbon, whose brother threatened to commit suicide a few days earlier.

Chabad hasid David Sitbon is under arrest for stealing weapons from the IDF and giving them to Haim Pearlman to use to murder Arabs.