Can 400,000 of Israel’s Russians Be Absorbed Into Israeli Society Without Alienating Non-Orthodox Jews?

“If you write in the law [as currently proposed] that the Chief Rabbinate has the ultimate authority over conversions, 30 years of legal decisions [by Israel’s High Court of Justice] are thrown out,” Reform leader Rabbi Eric Yoffie continued. “For us, that is the most significant issue; everything else should be negotiated.”

With Conversion Bill Postponed, What’s Next?
Can 400,000 of Israel’s Russians be absorbed into society
without alienating non-Orthodox Jews?
Stewart Ain • The Jewish Week 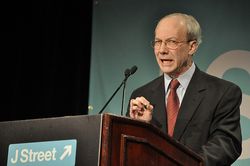 Although some American Jewish leaders said this week that they will be entering upcoming negotiations over the proposed Israeli conversion bill free of preconceptions, a leader of Reform Jewry said there remains a “red line” for his movement.

“The critical point will be giving ultimate authority to the Chief Rabbinate, which is a fundamental violation of the status quo,” said Rabbi Eric Yoffie, president of the Union for Reform Judaism. “In my opinion, that is the red line.

“If you write in the law [as currently proposed] that the Chief Rabbinate has the ultimate authority over conversions, 30 years of legal decisions [by Israel’s High Court of Justice] are thrown out,” Rabbi Yoffie continued. “For us, that is the most significant issue; everything else should be negotiated.”

Natan Sharansky, the head of the Jewish Agency for Israel, was last week appointed by Israeli Prime Minister Benjamin Netanyahu to lead negotiations to resolve the dispute over the bill, which Netanyahu said “could tear apart the Jewish people.” In announcing the talks, he also said there would be a six-month moratorium on the conversion issue.

The conversion bill’s author, David Rotem, a lawmaker from the Yisrael Beiteinu Party, has the support of the powerful Shas Party. Both parties are key members of Netanyahu’s coalition government, which enjoys wide support in the Knesset.

Rotem’s intent is to make it easier for an estimated 400,000 immigrants from the former Soviet Union to convert to Judaism by allowing local rabbis to establish conversion courts. His Yisrael Beiteinu party is made up primarily of FSU immigrants.

But to win support from the fervently Orthodox, Rotem included in the bill a provision placing responsibility for all conversions in the hands of the Chief Rabbinate and declaring that Orthodox interpretation of Jewish law would be the basis for all conversions. Those provisions are at the heart of the dispute with non-Orthodox American Jewry, which comprise the largest number of Jews in the United States.

Leading the opposition to the bill are the Reform, Conservative and Reconstructionist movements and the Jewish Federations of North America, whose leaders flew to Israel earlier this month to lobby Knesset members against it.

Writing in the Jerusalem Post Sunday, Sharansky said both sides discovered in the last two weeks that they could not “resolve their differences by force.”

“The fact that they have now agreed to a moratorium on unilateral actions — whether legislation in the Knesset or petitions to the High Court — shows that they have gained a new understanding of each other,” he wrote. “Perhaps the intense encounter during the latest political wrangling has given each one a better appreciation of the sincerity of the other side. … We must start listening to each other, and the sooner the better.”

Sharansky is expected to bring all sides to the table in early September, before the High Holy Days begin.

Jerry Silverman, president and CEO of the Jewish Federations of North America, said he was pleased the conversion bill has been tabled so that “the sides can get together.”

“There has been an inordinate amount of learning” on the part of all sides in the last few weeks, he said, adding that he is hopeful the new talks would lead to a solution.

Also optimistic about a compromise, Rabbi Julie Schonfeld, executive vice president of the Conservative movement’s Rabbinical Assembly, was pleased that Netanyahu has given his “unambiguous support to world Jewry” in opposing the Rotem bill and that she has seen Israeli lawmakers showing “a deeper understanding” of American Jewish concerns during recent talks.

“History will judge us as to whether or not we used this crisis to bring about greater understanding and vitality in our community,” she said. “A tremendous opportunity has been created by this crisis.”

Rabbi Yoffie said he believes Shas “is not going to accept” a compromise bill that does not include the provisions granting Orthodox hegemony over conversions.

“It’s just unthinkable,” he said. “So the question is whether the coalition government will be willing to come up with something that Shas will not embrace. My own view is that it is possible, otherwise there will be no compromise.”

“The heart of the bill gave absolute authority to the Chief Rabbinate over these matters,” he added. “We were not prepared to compromise on this issue in the beginning, and we are not now.”

But an influential Israeli Modern Orthodox rabbi with strong ties to American Jewry believes the Rotem bill has been “wrongly demonized” and that it could go a long way to solving Israel’s social crisis without changing the status of diaspora Jews.

Rabbi Shlomo Riskin, the spiritual leader of the Efrat community in the West Bank, charged the Conservative and Reform movements with “making political hay on the backs of hundreds of thousands of Russian immigrants,” asserting that the liberal groups’ complaint is based on a theoretical concern about the future rather than the immediate crisis Israeli society faces. His solution, the rabbi said, is for the bill to say that the conversions would take place under the supervision of the Chief Rabbinate, “according to the status quo,” which removes the worry of the bill codifying Orthodox-only legislation.

Rabbi Riskin said if the bill were to pass, he and other community rabbis would have the power and incentive to perform large numbers of conversions — as many as 40 a week that he could supervise personally, he said, with appointed deputies.

“Shas wants this to happen, and Yisrael Beiteinu won’t let it die,” said Rabbi Riskin, the founding rabbi of Lincoln Square Synagogue in Manhattan and a longtime Sabbath Week columnist for The Jewish Week. He emphasized that the current situation in Israel, with hundreds of thousands of immigrants who are Israeli citizens but not halachically Jews was a social “time bomb” that needs to be addressed immediately.

Can 400,000 of Israel’s Russians Be Absorbed Into Israeli Society Without Alienating Non-Orthodox Jews?

“If you write in the law [as currently proposed] that the Chief Rabbinate has the ultimate authority over conversions, 30 years of legal decisions [by Israel’s High Court of Justice] are thrown out,” Reform leader Rabbi Eric Yoffie continued. “For us, that is the most significant issue; everything else should be negotiated.”