« Why Is Kosher Meat Producer Agri Star Facing A Tax Sale Of Its Property? | Main | Letter from Jerusalem: An Eloquent Racist » 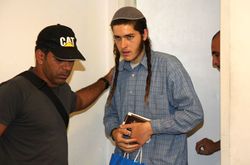 The defense counsel denied the allegations against them, saying the suspicions were founded on intelligence information only, and not on evidence. But the court's Vice President Inas Salama said the file contained enough evidence to support initial allegations.

Three of the detainees – Ahiya Shor, Hanani Lieberson and Yosef Matot, all aged 18 – are students at the Hasidim village yeshiva. The fourth, David Weinberg, is a student at a yeshiva in Ramat Hasharon. He was arrested during a visit to his friends in Hasidim. 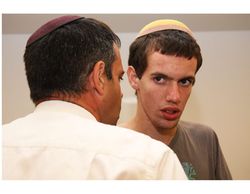 The hearing for each one was held separately, so that they could not coordinate their versions of the events. Police requested that the hearings would be held behind closed doors, but this request was denied by the presiding judge.

The defense counsel, Att. Adi Keidar, said the police have no evidence against the suspects, and that the entire case is based on information the police received from the Shin Bet and other sources. He said this was indicated by the fact that the police did not get an arrest warrant from the court, but came to the yeshiva and caught the suspects by surprise.

He also said the fact that the police are accusing each of the four suspects of exactly the same things shows that the allegation of conspiracy to commit a crime is immaterial.

The judge rejected the defense counsel's claims, and extended the suspects' remand by six days. He said the case included enough evidence against them, and that the investigation could not progress if the suspects were released.

"We can't ignore the fact that there are special circumstances," the judge said. "There is enough in the allegations to constitute potential for damaging feelings, incitement and provocation – things that are liable to lead to public disorder.

The defense counsel said he intends to appeal the decision.

The suspects face allegations of religious offense, vandalism of property and conspiracy to commit a crime. The police representative requested ten days' remand extension.
Failed messiah was established and run in 2004 by Mr. Shmarya (Scott)Rosenberg. The site was acquired by Diversified Holdings, Feb 2016.