What some early readers have found most disturbing is the authors’ description of the rebbe as a not especially pious young Hasid. They argue that Rabbi Schneerson’s initial dream was to be an engineer and that he mostly absented himself from Lubavitcher affairs before World War II, living in Berlin and Paris outside of a religious Hasidic community. 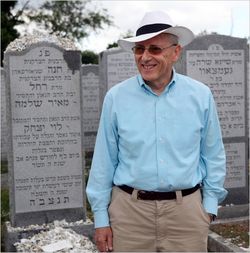 Dressed in a white straw hat, tan chinos and a blue shirt, Samuel Heilman, the co-author of a new book about Rabbi Menachem Mendel Schneerson, stood at the rebbe’s grave site among scores of pilgrims — a vanguard of the thousands expected to visit on Tuesday, in the Jewish calendar the 16th anniversary of his death — who arrived at a Queens cemetery a few days early to commune with their beloved leader.

“It is very holy,” Mr. Heilman said outside the open-air mausoleum, or ohel, that contains the graves of the rebbe and his father-in-law and predecessor, Rabbi Yosef Yitzchak Schneersohn. Hasidim believe that the spirit of a great sage remains after death, and many Lubavitchers think the rebbe is not only a sage, but also the messiah.

The biography’s look at Schneerson’s personal life is already causing a stir in the continuing discussion about his legacy.

Mr. Heilman pointed to a headstone facing the ohel that refers in Hebrew to the rebbe as “the Messiah of God.” 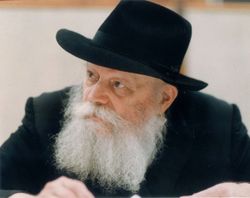 “It’s etched in stone,” he said. Rabbi Schneerson, the seventh and at this point the last leader of the Chabad Lubavitchers, remains as powerful a presence in death as in life.

Over the course of his more than 40 years as grand rebbe, he transformed this tiny Hasidic sect, with its headquarters in Brooklyn, into an influential global network of Jewish followers and emissaries and turned it into one of the most important religious movements within American Jewry. His life and philosophy are essential to understanding contemporary Jewish life.

Mr. Heilman, a sociologist at Queens College, and Menachem Friedman, a professor emeritus at Bar-Ilan University in Israel, offer a view into his world in their new biography, “The Rebbe: The Life and Afterlife of Menachem Mendel Schneerson” (Princeton University Press). But they have provoked a growing chorus of complaints from people inside and outside Chabad with their characterization of the rebbe.

Controversy is perhaps inevitable. “Any attempt to humanize the rebbe is going to provoke this reaction.” said Elliot R. Wolfson, a professor of Hebrew and Judaic studies at New York University and the author of “Open Secret: Postmessianic Messianism and the Mystical Revision.”

What some early readers have found most disturbing is the authors’ description of the rebbe as a not especially pious young Hasid. They argue that Rabbi Schneerson’s initial dream was to be an engineer and that he mostly absented himself from Lubavitcher affairs before World War II, living in Berlin and Paris outside of a religious Hasidic community.

Only after he escaped from Europe and arrived in the United States in 1941, when he was a childless refugee with little English and few job prospects, and millions of his people had been massacred did he see he himself as having a different mission, the book contends.

Rabbi Schneerson was a man who “must be feeling desperate in his anxiety, loneliness, confusion and survivor guilt, whose prospects are unclear, looking for a way out, an answer from God,” the authors write.

Sitting outside the ohel visitor center as a large brown tour bus pulled up, Mr. Heilman, a modern Orthodox Jew, spoke of his “profound respect” for the Lubavitchers but noted that his responsibility as a scholar was not simply to celebrate the rebbe’s accomplishments. “They just can’t accept that he transformed himself, that he was not always going to be the rebbe,” he said.

Mr. Heilman and Mr. Friedman did not have access to Chabad’s private archives, though there is already a monumental amount of published material from and about the rebbe, with a new collection of 1,200 documents soon to be released. The scholars did speak with many movement members, some of whom are now critical of the biography.

Rabbi Zalman Shmotkin, a Lubavitch spokesman who is thanked in the book, labeled their speculations “psychobabble” and disdained their attempt to put “themselves in the rebbe’s head while ignoring his deeply expressive correspondence and his scholarly approach.”

Other critics take the authors to task for not relying more on published material. Steven I. Weiss, the head of news at the Jewish Channel, a cable television network, criticized the book for presenting what he called lurid details and ignoring a vast amount of “primary material which would frequently contradict its assertions.” He also chastised the authors for not noting outright that Mr. Friedman served as an expert witness against the rebbe during a lawsuit in the 1980s over ownership of the Chabad library. Mr. Heilman said, “We have no ax to grind.”

And Mr. Wolfson of N.Y.U. argued that bypassing the rebbe’s religious writings was a mistake. “There is no question that Menachem Mendel and his wife were spreading their wings” during their sojourn in Paris and Berlin, he said. But the diaries from those years show that he was also completely absorbed in Hasidic thought and Jewish learning. “The world he lived in was completely structured around his ideas,” he said.

Mr. Heilman maintained that Lubavitcher accounts can’t be trusted because they are hagiographies and said that he and Mr. Friedman did not examine the rebbe’s extensive writings on scripture because they were interested in his personal history, not his scholarship.

The American and Israeli professors are colleagues and friends who have independently studied the Lubavitchers for nearly 20 years. It was their wives, though, who suggested in 2007 that the two collaborate on a book while they were all vacationing together in Croatia.

In Mr. Heilman’s eyes, the key to the movement’s success was Rabbi Schneerson’s global vision. He figured out how to permit younger followers to engage with the modern world while remaining true to their Hasidic beliefs. By becoming shluchim, or missionaries, they could spread Lubavitch practices, thereby hastening the arrival of the messiah and redemption.

Rabbi Schneerson told his shluchim not to limit their efforts to the most religious but to every Jew. “They take everyone,” Mr. Heilman said.

More books and biographies are on the way, insuring that the Talmudic-like debate about Rabbi Schneerson’s life will continue.

What some early readers have found most disturbing is the authors’ description of the rebbe as a not especially pious young Hasid. They argue that Rabbi Schneerson’s initial dream was to be an engineer and that he mostly absented himself from Lubavitcher affairs before World War II, living in Berlin and Paris outside of a religious Hasidic community.
Failed messiah was established and run in 2004 by Mr. Shmarya (Scott)Rosenberg. The site was acquired by Diversified Holdings, Feb 2016.