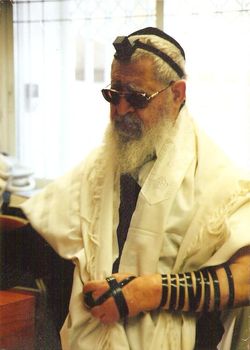 In an unprecedented halachic ruling, Shas' spiritual leader Rabbi Ovadia Yosef has allowed a woman pregnant by artificial insemination to marry a man who is not the father of the developing child.

M., a 44-year old religious woman, decided to get pregnant through a sperm bank because she feared she would not be able to conceive if she waited any longer.

However immediately after her insemination she met a 50-year old widower and the two quickly decided to wed, after the latter accepted responsibility for the child.

The couple immediately ran into trouble: According to the Jewish halacha, a pregnant woman is not allowed to marry any man who is not the father for 24 months after the birth.

The ruling preserves the unborn child's rights. Rabbis explain that if the woman becomes pregnant again within the two years that follow the birth, the mother may stop producing milk for the baby.

The couple appealed to the local rabbinate, but was forbidden to marry. They then turned to Rabbi Ovadia Yosef, who ruled that the mother may use milk substitutes to feed her child if she conceives again in the coming years.

Attorney Zuriel Bublil, who helped the couple with their appeal, was pleased with the result. "This is an unprecedented ruling that will help women coming to the end of their fertility," he said.

"Rabbi Yosef dealt with halachic reality with great courage, in a matter that many feared to allow or even discuss. The couple wanted to bring the child into the world after they were already married, and their time was almost up."

M. and her fiancé were married according to Jewish law on Sunday.