"We are all with the residents of Emmanuel, and will not violate God's word. The court in Israel conspires against the God-fearing public, belittles its values, abuses its children, and revokes its rights." 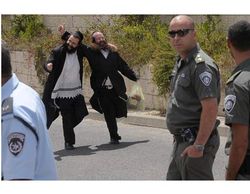 The Immanuel school segregation affair has come to an end. The High Court of Justice yesterday adopted a document agreed on by ultra-Orthodox rabbis, with the approval of Shas spiritual leader Rabbi Ovadia Yosef, stating that the girls studying at the Bais Ya'akov school in Immanuel, segregated for more than three years, will be integrated for the final three days of school.

The final days will be dedicated to a "seminar" that will focus on "unity, peace and love of Israel."

The agreement does not say anything about the next school year or coming years, and the parents of the Hasidic community in the settlement insist they will not allow their daughters to study at an integrated school and would likely establish a new school in the community.

A spokesman for the released parents, Yitzhak Weinberg, announced immediately outside the court that "today it became clear to everyone that those who decide in the State of Israel are the [rabbis] and no one else. They and only they will decide for the public, and the Haredi community especially, what the Torah is, what are ethics and what is justice. They and no one else."

The court recognized the agreement as indicative of the group's heeding its ruling of last August in which parents were ordered to integrate the school serving the predominantly Ashkenazi Hasidic community and predominantly Sephardic girls of the "general population" in the ultra-Orthodox settlement.
Great joy in the Haredi communities

As a result of the court's accepting the agreement, the court ordered the 33 fathers in custody released and decided not to enforce the arrest warrants against 10 other parents - eight of them women - who had refused to heed to court ruling on integrating the school.

At the completion of court deliberations, which were attended by Shas leader and Interior Minister Eli Yishai, who had been instrumental in putting together the agreement, there was great joy in Haredi communities in Jerusalem and Bnei Brak, with the released prisoners being the focus of attention.

Throughout the day the released parents visited senior Haredi rabbis, especially the signatories of the agreement, Rabbi Ovadia Yosef and the Admor of Slonim, spiritual leader of the most of the parents, Rabbi Shmuel Berezovsky.

Rabbi Yosef, who was received by the parents with song and chant at the synagogue below his home in Jerusalem greeted them, "Only unity saves us. All of us - Sephardim and Ashkenazim - all of us are sons of Abraham, Isaac and Jacob. God forbid that one will harm the other. We all love, we are all loved."

Despite the chants of victory, the agreement was reached in largely because of the willingness of Berezovsky to compromise. He had said last week that he would not compromise and that he was willing to "face a shooting squad" but he reached an agreement with Ovadia Yosef for a seminar instead of the regular school days that the High Court called for. Many meetings were held in the Haredi community in an effort to find compromise and prevent the possibility that the High Court would send more parents to prison for contempt of court.

Efforts at compromise were also made by the Justice Minister Ya'akov Ne'eman, on Saturday night, without success.

The petitioner in the case against the segregation, Yoav Lelom and the Education Ministry were not involved in the negotiations, but told the court yesterday that they accepted the compromise.

"We, the heads of Haredi Judaism, gathered to bring reconciliation and unity in Immanuel," the agreement states.

Attorney Mordechai Green, representing the parents, told the court that the compromise was a "dramatic development."

The agreement makes no reference to the court ruling or its decisions and Green evaded the question of Justice Hanan Melcer on whether the agreement constituted carrying out the court's decisions. Green said later that he had been ordered by his clients not to agree to a document that would state that the court's ruling had been accepted.

More than 1,000 people gathered at the entrance to Bnei Brak to welcome 34 fathers from Emmanuel who were recently released from Maasiyahu Prison.

The fathers were imprisoned for 10 days for refusing to obey a High Court ruling, which ordered a girls' school in Emmanuel to cancel its separatist policies. They were released after agreeing to a compromise, and traveled immediately to Bnei Brak.

Supporters gathered at the entrance to Shaarei Eliyahu yeshiva, where the fathers received a blessing from the Head of the Shaarei Eliyahu Yeshiva, Yehuda Levkovitch who said, "There was no reason to compromise. One should not compromise on education over funding."

The fathers then marched through the city.

A speaker system blared: "We are all with the residents of Emmanuel, and will not violate God's word. The court in Israel conspires against the God-fearing public, belittles its values, abuses its children, and revokes its rights."

Following their release Yoav Laloum, who petitioned the court against the discrimination at the school, told Ynet, "We achieved our goal long ago. But only now did they agree to send the girls back to school, which was our only demand, but in practice, the verdict spoke for itself long ago. This is a victory for us."

Commenting on the prior compromise attempt, Laloum said, "We proposed that same compromise months ago. They are the ones who climbed up trees and now they are falling from them."

According to the compromise agreed upon by the court and the parents, the girls are to continue attending the now non-separatist school for the last three days of the school year.

During this time the school will hold special assemblies for the students "to encourage unity and love of Israel". Afterwards, the sides are to reach a settlement.

Justice Edmond Levy said the judges were satisfied that the court order had been carried out in full and that the parents had obeyed its ruling. "Most important is this statement – which goes without saying in a democratic state – and I have been asking myself if it is indeed understood here," he said.

"We are all with the residents of Emmanuel, and will not violate God's word. The court in Israel conspires against the God-fearing public, belittles its values, abuses its children, and revokes its rights."