The complaint filed against the former Agriprocessors Inc. executive listed 31 alleged minors who prosecutors said worked at the plant. Twenty-six of the minors testified during the trial, which entered its fifth week.

The five who didn't testify weren't on the prosecution's final witness list.

Last week, the defense filed a motion to dismiss the charges related to the five alleged child laborers because there was no way to otherwise determine their ages. 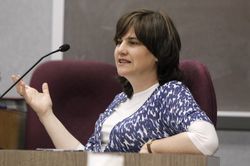 Leah Rubashkin peppered her testimony with jokes about her husband as she told the jury about their religious beliefs, large family, lengthy marriage and Sholom's dedication to their autistic son.

She recounted her husband's frequent business trips in the two years leading up to a May 2008 immigration raid. The couple also traveled to Israel and Ukraine in 2007, in which they reassessed their lives and service to God, she testified.

"We wouldn't let him leave just for business," Leah Rubashkin said with a grin.

Sholom Rubashkin leaned back in his chair and stared straight ahead during his wife's testimony. He sometimes smiled at his wife's remarks.

Leah Rubashkin noted a family resemblance between her husband and his brother, Heshy. She said people frequently confused the brothers, who both worked as executives at the plant.

Several witnesses for the prosecution said they saw Sholom Rubashkin walking around the plant. They claimed anyone who did so could have easily identified minors at the Postville plant.

Leah Rubashkin said the couple have been married for 28 years, and have 10 children, ranging in ages from 6 to 28, including their 16-year-old autistic son, Moshe.

Sholom Rubashkin came home from work early for about two years before the immigration raid to assist in Moshe's development, she said.

"We have 10 universes, actually," she said of their children. "But he's a pretty big one in the orbit. After the raid, everything was shattered."

Two earlier witnesses who now work with Agriprocessors' successor, Agri Star, testified Tuesday that they always saw laborers wearing proper safety equipment, and never suspected any of them to be minors.

Wayne Hecker, a former plant manager, said that in 2007 he escorted the child of another employee off the plant floor when it was discovered the person was a minor.

Rodney William Heston, an industrial refrigeration contractor, said the plant's largely Latino work force and equipment were comparable to those of other plants he has visited.

Heston said the anhydrous ammonia used as a coolant in refrigeration systems never leaked around workers.

Prosecutors noted on cross-examination that the plant was cited in 2008 for not posting evacuation routes, which are crucial to survival in case of a leak.

As the court emptied for the day, Sholom Rubashkin and about two dozen young supporters bowed slightly in a rocking motion toward the courtroom wall as Rubashkin recited afternoon prayers in rapid-fire Hebrew. Sheriff's deputies looked on as the group occasionally filled the courtroom with a chorus of male voices.

Closing arguments are scheduled to last most of today.

Sixteen misdemeanor child labor charges filed against Sholom Rubashkin were tossed Tuesday because five minors listed in the complaint failed to testify during the former plant executive's trial.
Failed messiah was established and run in 2004 by Mr. Shmarya (Scott)Rosenberg. The site was acquired by Diversified Holdings, Feb 2016.