A singer and purported rabbi who claimed to have the stardom of Michael Jackson in Israel was sentenced to one to three years prison on Tuesday for stealing $36,000 from a Washington Heights woman. 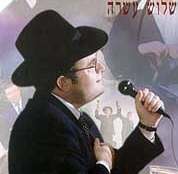 MANHATTAN SUPREME COURT — A singer and purported rabbi who claimed to have the stardom of Michael Jackson in Israel was sentenced to one to three years prison on Tuesday for stealing $36,000 from a Washington Heights woman.

Muchael Streicher, 50, scammed the money from his victim — a fellow Orthodox Jew — by promising he would invest it in a coveted Torah scroll, which he said he would acquire through his connections in Israel.

Instead, Streicher took the money and ignored demands from the victim, Judy Burstein, and her family to return it.

Burstein said she intended to give the Torah to her now deceased husband, who was ill and unable to leave the house to worship.
Yehuda Burstein, 34, the son of the singer's alleged victim. (DNAinfo/Josh Williams)

Streicher was found guilty of grand larceny and harassment at trial. When he testified he described himself as a major music celebrity overseas.

"It wasn't fifty thousand it was only a few — they exaggerated," Streicher allegedly said when he was arrested on Feb. 17, 2008, according to court documents.

At his sentencing Tuesday, Streicher's lawyer Eric Franz, asked for a reduced sentence of only six months, with probation to follow.

But Manhattan Supreme Court Judge said Streicher should have to pay for the stress and agony he caused Burstein's family.

The funds were not returned until Tuesday, when Streicher handed over a check to prosecutors in court.

Burstein's son, Yehuda, 34, said his mother is very relieved that the ordeal is over.

Outside the courthouse, Franz defended Streicher's questionable status as a member of the Orthodox clergy. The lawyer said Streicher is a trained rabbi, but does not have his own congregation.

Here's is the AP's report. Note the spelling of Streicher's first name:

NEW YORK — A noted singer of Jewish music is headed for prison after being convicted of stealing $36,000 from a New York City woman who says the money was meant to buy Torah scrolls.

Michoel Streicher (MIKH'-oh-ehl STREYE-kuhr) was sentenced Tuesday to one to three years in prison. He apologized and said his conduct was "not intended." He also gave the woman's family a $36,000 check.

The Orthodox cantor has released several albums. Most came out in the 1990s. He's also known as Michael Streicher.

The woman's son says Streicher claimed he could help her get the scrolls. The son says she hoped an ailing relative would be able to use them for religious observance at home.

His family now lives in Israel.

A singer and purported rabbi who claimed to have the stardom of Michael Jackson in Israel was sentenced to one to three years prison on Tuesday for stealing $36,000 from a Washington Heights woman.
Failed messiah was established and run in 2004 by Mr. Shmarya (Scott)Rosenberg. The site was acquired by Diversified Holdings, Feb 2016.