“Nobody responsible has made the allegation” of anti-Semitism, lead Rubashkin attorney Lewin said. The prosecutors “are overzealous and [have] done things they should not have done…" But before the trial Rubashkin attorney Guy Cook compared life for Rubashkin in Postville to the Warsaw Ghetto under the Nazis, and pro-Rubashkin rabbinic leaders–like chief Rubashkin fundraiser Pinchos Lipschutz– continue to openly claim antisemitism, as they have been doing since Rubashkin's initial arrest in 2008. 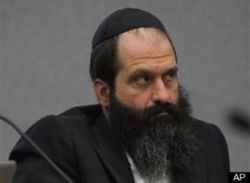 On Tuesday night, hours before a federal judge formally sentenced Sholom Mordechai Rubashkin, former manager of his family’s Agriprocessors meatpacking plant, to 27 years in prison, thousands gathered at a high school in Borough Park. The auditorium quickly filled and loudspeakers and video screens pumped a live feed of the event to crowds standing outside. The event was for men only. Several women sat demurely on plastic chairs at the side of the building.

“Once again, a Jew has been scapegoated,” Rabbi Pinchas Lipshitz, publisher of a Charedi newspaper and one of the organizers of the event, told the crowd.

The gathering was a prayer rally and a fundraiser for Rubashkin’s legal team. It seemed to acquire a terrible urgency after Judge Linda Reade released her sentencing memo a day early. Many of Rubashkin’s supporters considered their worst fears about the case to have come to pass. And even his sharpest critics largely agree that the punishment meted out in Iowa is far too harsh.

Earlier Tuesday, fliers with Rubashkin’s picture and a request for donations were plastered all over Borough Park. On Tuesday night images of Rubashkin and his family flashed on several large video screens accompanied by somber music. One picture that was replayed a number of times was of Rubashkin reaching out to high-five his autistic son.

Lipshitz narrated Rubashkin’s story as a Job-like parable. Satan, he explained, told G-d that the Jews were not united. To test his theory, Satan went to “Yehupitz” – Nowheresville – “You couldn’t find it on a map,” he said, referring to Postville, IA, where a federal raid took place in 2008 and 400 illegal employees were arrested in Rubashkin’s meatpacking plant. Rubashkin’s subsequent imprisonment and trial and the community’s reaction to it, Lipshitz explained, were the test.

“Baruch Hashem, we proved him wrong,” about not being united, Lipshitz said, gesturing to the thousands of chasidic men who applauded.

The speakers included many prominent rabbinical figures from Brooklyn and Monsey. They spoke in Yiddish, recited Tehillim, and lamented Rubashkin’s fate. The only flash of color on the podium came from Nathan Lewin, a Washington, D.C.-based attorney, who wore a blue shirt and a straw hat.

A federal jury found Rubashkin guilty of 86 counts of fraud, mainly relating to inflating his company’s accounts receivable in order to gain more credit on a loan from First Bank Business Capitol of Saint Louis. After the raid and the eventual Agriprocessor bankruptcy, the bank claimed it had lost $26 million. The government chose not to file immigration charges against Rubashkin and he was acquitted in a state case of 9100 violations of the child labor laws.

As it now stands, Rubashkin will spend the next 27 years in prison, two years longer than the sentence prosecutors had requested, before being released on a supervised probation. He will also be required to pay $26 million in restitution.

Rubashkin’s defense claimed the bank lost only $4.5 million. Lewin asserted that there was never “any effort on the part of Mr. Rubashkin to cheat the bank on its money,” and that Rubashkin paid the interest on time on all the loans.

“Ultimately the bank lost a large part of money because the business was driven into bankruptcy because of the raid,” Lewin said in a conference call after the sentencing was announced.

“The argument is based on conjecture and a definition of ‘loss’ so far removed from common sense… that the court declines to afford it any further consideration,” she wrote.

Rubashkin drew additional prison time for perjuring himself under oath and engaging in what federal guidelines regard as “sophisticated bank fraud.”

Critics accused the prosecution of being overly zealous. Earlier, prosecutors had sought a life sentence for Rubashkin but backed off after six former attorneys general sent letters of protest to the judge.

Citing the uncommon length of his sentence, Rubashkin’s defense plans an appeal. Lewin noted that a bank official in First Bank Business Capitol defrauded the bank for $32 million and was sentenced to one year behind bars. Guy Cook, another member of Rubashkin’s legal team, filed several requests for a mistrial but was refused. The defense was not allowed to challenge the immigration accusations that were mentioned in federal court. Lewin also said that character witnesses for Rubashkin were not allowed to testify.

In a letter released on Tuesday, the state’s attorney, Stephanie Rose said, “a concerted campaign emerged to paint prosecutors as racists, Nazis, and zealots.”

“Various interest groups and people evidently seeking personal notoriety have hijacked the true facts of this case for their own purposes,” she wrote. “It is impossible to address the mountain of false information that has found its way into the public arena. But the jury found the truth – that Rubashkin knowingly employed illegal workers and committed a $26 million bank fraud. He is a common criminal who committed uncommon crimes.”

Voices that had taken to describing the case against Rubashkin as anti-Semitic have been silenced.

“Nobody responsible has made the allegation” of anti-Semitism, Lewin said during a conference call with reporters. The prosecutors “are overzealous and [have] done things they should not have done – things that I have not experienced in 40 years of engaging in criminal defense law.”

Rabbi Dovid Zwiebel, executive vice president of Agudath Israel of America, issued a statement about the sentence calling it a “dark day for American justice.”

“It is a dark day, as well, for American Jewry,” he wrote. “While none of us condones any wrongdoing by Mr. Rubashkin, the extraordinary severity of the sentence imposed upon one of our Jewish brothers sends chills of shock and apprehension down our collective spine. This is a horrifying development.”

Ben Brafman was not involved in the Rubashkin case, but when asked, the prominent criminal defense attorney offered his opinion that the sentence was too harsh, and suggested there would be strong grounds for appeal.

“In my opinion, a 27-year sentence in this particular case, with a non-violent crime and a first time offender is not only excessive, it is patently offensive,” he said. “This is a sad case with a very sad ending. The severity of the sentence, however, suggests to me that after appellate review this case will come back for further proceedings before a different judge who will hopefully impose a much more reasonable sentence, assuming of course that the conviction survives.”

The length of the sentence dismayed some of Rubashkin’s fiercest critics.

“I’m not happy with his sentence,” wrote Shmarya Rosenberg, the blogger behind Failed Messiah, a site that covered the story relentlessly, and very critically. “I find this terribly sad, and I’m not in any way rejoicing.”

Rabbi Shmuly Yanklowitz, the founder and president of Uri L’Tzedek, the Orthodox social justice organization that led a boycott of Rubashkin products after the federal raid, said he also thought the sentence “sounded too high,” but the resulting outcry, he maintained, missed the point.

“There is a dangerous trend in our community to reduce the entire Agriprocessors affair to anti-Semitism and to ignore the sacred responsibility we have to address the real ethical crisis that exists in our community today,” Rabbi Yanklowitz said. “I worry that with all the focus on Sholom Rubashkin, we are losing sight of the larger moral picture: the thousands of workers who work in oppressive and unjust conditions to produce our kosher food.”

Stephan Bibas, professor of law and criminology, and director of the Supreme Court Clinic at the University of Pennsylvania Law School, said that the sentence was high but not “ridiculously so or unprecedented.”

“What’s driving this is a rather by-the-book application of the stiff white-collar sentences that were jacked up in the wake of Enron, WorldCom, and other corporate scandals of the last decade or so,” Bibas explained via email. “The $26 million figure drives this unless the judge looks for a way around it, and here she didn’t. Other judges would try to squint harder to reduce the foreseeability or intended loss – that can be an unclear and contestable issue. The Midwest is just a pretty conservative, by-the-book region when it comes to federal sentencing. Rejecting the pleas for mercy based on the sick kid and charitable works is pretty standard.”

Outside, on an early summer night in Borough Park, the air was rife with conspiracy theories and the belief that the sentence was a result of anti-Semitism. One protester held a poster with the phone number of the Iowa Attorney General and grumbled that people should call and complain.

“Mamash (literally), it’s like the Dreyfuss Affair all over again,” said a well-dressed woman who gave her first name as Rochel. The fact that Rubashkin was considered a flight risk because he could flee for Israel, she added, could be taken to mean that all Jews could be considered as flight risks.

Yossi Gestetner, a freelance writer and a public relations consultant in the charedi world said he didn’t feel the sentence was a result of anti-Semitism so much as of a collusion of forces against Rubashkin including PETA (People for the Ethical Treatment of Animals), unions and the New York Times.

“Destroying an entity that produced food mostly for members of a religion, is something the Left loved to do since they hate religion,” he offered. “The weak spots in the US Justice system – and I know now there are too many – opened the door for the liberal agenda to plow forward, to take down Rubashkin.”

Gestetner said he had been among many individuals in Brooklyn collecting for Rubashkin. On the day of the sentencing alone, he said, he had raised $5000.

Lipshitz, who spoke to Rubashkin on the day of the sentencing, described him as undaunted.

“He’s full of Bitachon (faith),” Lipshitz said. “He’s not going to be broken. Not him, nor his family, nor his community – no matter how hard they try.”

So far, Lipshitz said, $1 million dollars had been raised for Rubashkin. During his remarks he told of receiving checks from schoolchildren and elderly grandmothers, one, a 90-year-old woman who had seen her own grandmother killed in a pogrom. Lipshitz quoted her as saying, “My grandmother was killed in a blood libel, how could I sit quietly by?”

“Nobody responsible has made the allegation” of anti-Semitism, lead Rubashkin attorney Lewin said. The prosecutors “are overzealous and [have] done things they should not have done…" But before the trial Rubashkin attorney Guy Cook compared life for Rubashkin in Postville to the Warsaw Ghetto under the Nazis, and pro-Rubashkin rabbinic leaders–like chief Rubashkin fundraiser Pinchos Lipschutz– continue to openly claim antisemitism, as they have been doing since Rubashkin's initial arrest in 2008.