A jury found Sholom Rubashkin not guilty of all 67 child labor violations he faced involving 26 teenagers from Guatemala and Mexico who worked at the Agriprocessors plant in Postville. Rubashkin had been charged following a May 2008 immigration raid in which 389 workers were arrested.

Jurors reached the verdict in the second day of deliberations after a nearly month long trial in Waterloo.

In the child labor case, prosecutors had argued that Rubashkin knowingly employed underage workers, exposed them to dangerous chemicals, allowed them to operate power machinery and allowed them to work more time per day and per week than is legal.

The alleged violations occurred between September 2007 and May 2008, when the plant was raided by federal immigration agents.

Each charge was a simple misdemeanor that carried a potential penalty of $625 and 30 days in prison.

Here is the Register's initial report / blog post. Note the primary problems with the prosecution's case were that it did not show a clear line from Rubashkin to the hiring of underage workers and because the workers lied to get their jobs: 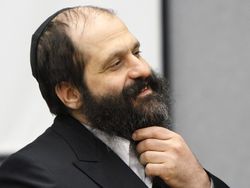 2:50 p.m., Waterloo, Ia. — Sholom Rubashkin has been found not guilty on all 67 misdemeanor child labor charges.

Rubashkin smiled when he heard the verdict and slapped his attorneys on the back as they embraced.

“It’s a flat-out vindication that this man did not want young people in his father’s plant,” said defense attorney F. Montgomery Brown. “Sholom has been vindicated as a human being.”

Attorneys and family for Rubashkin said he remained calm and confident through closing arguments and during 12 hours of jury deliberation. When he walked into the courtroom to hear the jury’s decision, he appeared relaxed and smiled to greet his family.

Deputy Iowa Attorney General Thomas H. Miller said he found the verdict disappointing, but said the case served to spotlight vulnerable populations in Iowa and those who might abuse them.

“We feel the humane treatment of workers in this state, whether they be documented or not, is important to the upholding of the law and values of the state of Iowa,” he said.

“”There was not only wholesale violations of Iowa’s child labor law. In this case, there was abundant evidence to support the claim that there was extortion, sexual abuse and forced labor committed against the population of workers at Agriprocessors.”

For 12 hours the four-woman, three-man jury sifted through the testimony of dozens of witnesses — including 26 alleged child laborers and several former plant managers — who took the stand during the five-week trial.

The state claimed children inside the plant labored up to 90 hours per week, wielded large powered saws and knives, and suffered health problems from exposure to bleach and dry ice.

The defense argued company policy reflected Rubashkin’s desire to keep children from working at the plant, and that the minors tricked the company into hiring them with false documents.

After the verdict was read, Black Hawk County District Associate Judge Nathan Callahan said the prosecution of child labor charges served a “clarion call” in Iowa that egregious working conditions for children will not be tolerated. In that regard, he said the prosecution was “worth every penny.”

“In my view, really, a clarion call from the trial is that in this day and age there is no excuse for having children in an occupation of this nature. And if it happens, something is going to be done about it,” he said.

Callahan called it a complex case, and refused to bicker with the decision. He noted the case didn’t come down to whether children ever worked in the plant.

Over and over, the defense reminded the jury had to find that the evidence proved beyond a reasonable doubt that Rubashkin “intentionally, deliberately and knowingly” allowed children at Agriprocessors.

Quentin Hart, a Waterloo City Councilman who served as jury foreman, said that proved a high standard for the prosecution to meet.

Hart said the jury largely remained on the same page throughout deliberations. He said a major influence on their verdict was the testimony of the alleged child laborers because they testified to lying about their ages to law enforcement officials and presenting false documents to Agriprocessors.

“Each one of them indicated they didn’t tell the truth, and indicated they knew they had to be over the age of 18 to get a job, so they acquired documentation from somewhere,” he said.

He also said the evidence never showed a clear line from Rubashkin to the 26 children named in the case. Evidence that the plant fired some minors when they were discovered, and that some minors were turned away, helped sway the jury, he said.

Hart emphatically said this case, more than anything, proves a desperate need for comprehensive immigration reform.

“It was a bad situation. We have a lot of people where we can’t necessarily change what goes on in their countries. But we need to take a holistic look when looking at this challenge of immigration,” he said.