Prosecutors built their child labor case against Sholom Rubashkin on the testimony of liars and thieves, and failed to prove that the former Agriprocessors Inc. executive allowed children to work at his family's slaughterhouse, defense attorneys argued Thursday. 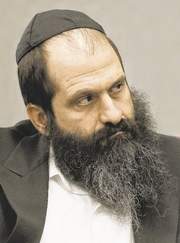 Waterloo, Ia. — Prosecutors built their child labor case against Sholom Rubashkin on the testimony of liars and thieves, and failed to prove that the former Agriprocessors Inc. executive allowed children to work at his family's slaughterhouse, defense attorneys argued Thursday.

"What evidence has the state shown that Sholom Rubashkin intended minors to be in the plant? Not a shred," defense attorney Mark Weinhardt said in a three-hour closing argument.

After a five-week trial, the jury will begin deliberations today on Rubashkin's 67 misdemeanor child labor charges. The maximum sentence could be up to 5½ years in prison.

The defense painted Rubashkin as a victim of an "underground illegal immigrant railroad" that ended in Postville.

Alleged child laborers who testified to working long hours and around dangerous machinery and chemicals were "practiced liars" about their identities, Weinhardt said.

He argued that the state pinned its case on two convicted thieves, Mark Spangler and Matthew Derrick, who provided some of the most damaging testimony against Rubashkin.

In a two-hour rebuttal, Deputy Iowa Attorney General Thomas H. Miller said managers who hid workers from authorities and told them to lie about their ages proved an orchestrated effort existed to conceal child laborers.

Miller reminded the jury that Derrick and Spangler were among many who said it was no secret that minors worked at Agriprocessors. Miller also pushed back on the defense's attack on the alleged child laborers' credibility.

"You can choose not to believe a word that they said," he said. "I'll ask you to believe your own eyes. These were a bunch of kids."

Miller argued Rubashkin repeatedly shrugged off accusations of child labor, and opted to exploit the culture and poverty of the Guatemalan workers. When the law caught up to him, "he passed the buck," he said.

"Sholom Rubashkin was the CEO," he said. "With that title, there's a responsibility for what transpires in that facility."

Weinhardt urged the four-woman, three-man jury to focus on whether Rubashkin is criminally responsible for willfully allowing children to work in the plant. He said no one, including Rubashkin, wanted children working at the plant.

He reminded the jury that Derrick, the former supervisor, didn't mention a conversation in which he warned Rubashkin about minors at the plant until he testified. Testimony revealed that he did not divulge the conversation in interviews with investigators building a case against Rubashkin.

"Here's the bottom line: This conversation he claimed he had with Mr. Rubashkin, it didn't happen," he said.

Defense attorney F. Montgomery Brown highlighted the testimony of top managers who said they never saw what they believed to be minors inside the plant.

Brown at one point took off his gray suit coat and donned a white coat and hard hat. People look different when they put on the plant's safety gear, he told the jury.

Weinhardt and Brown finished with a flourish. Weinhardt invoked John Adams, the nation's second president, who said, "We are a nation of laws and not men."

"You can feel from the absence of evidence - and the evidence itself — that they rushed to the conclusion that he was responsible, this white whale," Brown said. "Moby Jew."

Prosecutors built their child labor case against Sholom Rubashkin on the testimony of liars and thieves, and failed to prove that the former Agriprocessors Inc. executive allowed children to work at his family's slaughterhouse, defense attorneys argued Thursday.