Closing arguments in the child-labor trial of former Agriprocessors Inc executive Sholom Rubashkin has been pushed back until 1 p.m. while jury instructions are finalized. 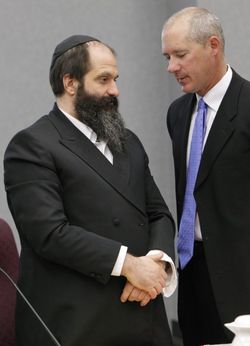 10:17 a.m., Waterloo, Ia. — Closing arguments in the child-labor trial of former Agriprocessors Inc executive Sholom Rubashkin has been pushed back until 1 p.m. while jury instructions are finalized.

The judge said arguments may not be completed today because of the sheer volume of evidence. Rubashkin faces 67 misdemeanor child-labor charge, after the judge tossed out 16 yesterday.

The scheduled three-week trial has stretched into a fifth week because of several delays, including Jewish holidays, a court furlough due to budget cuts, and Rubashkin’s hospitalization with an infection.

The defense has argued Rubashkin did not known of minors at the plant because it is difficult to gauge the ages of Guatemalan and Mexican workers who used fake ID’s to gain employment.

State prosecutors brought forward a parade of 26 former plant laborers who said they were as young as 13 when they started working at the kosher slaughterhouse in Postville.

The defense attacked their credibility because they lied about their age to gain employment,  and because they have applied for or have received U-visas, which in part requires them to cooperate with the prosecution.

Former supervisors have given clashing testimony as to how easy it would be to identify minors by walking the plant floor. A state witnesses said someone would spot minors “unless you’re blind,” while those who testified for the defense said they never suspected child laborers at the plant.

One former supervisor said he hid one of his workers from government inspectors because the laborer looked young.

The defense spent a chunk of its case on attempting to discredit former supervisor Matthew Derrick. He’s the only witness who said he had a conversation or any communication with Rubashkin about children at the plant.

Witnesses have said Derrick sexually harassed at least one of the former child laborers, and disparaged his Latino workers behind their back.

Closing arguments in the child-labor trial of former Agriprocessors Inc executive Sholom Rubashkin has been pushed back until 1 p.m. while jury instructions are finalized.
Failed messiah was established and run in 2004 by Mr. Shmarya (Scott)Rosenberg. The site was acquired by Diversified Holdings, Feb 2016.