"There were not only wholesale violations of Iowa's child labor law. There was abundant evidence to support the claim that there was extortion, sexual abuse and forced labor committed against the population of workers at Agriprocessors."

Rubashkin is acquitted on all counts in child labor case 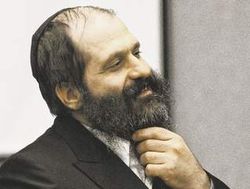 Waterloo, Ia. - Former Agriprocessors Inc. executive Sholom Rubashkin was found not guilty Monday of all 67 misdemeanor child labor charges against him, a verdict his attorneys called an unprecedented legal upset.

Rubashkin smiled when the judge read the decision, and he slapped his lawyers on the back as they embraced.

"It's been a long-running American opera," defense attorney F. Montgomery Brown said outside the courthouse. "This act was written by a very courageous jury. This act can never be taken away from Sholom and his family - ever."

For 12 hours, the four-woman, three-man jury sifted through the testimony of dozens of people who had taken the stand during the five-week trial. The witnesses included 26 alleged child laborers and several former managers of the Postville plant.

State prosecutors alleged Rubashkin allowed minors to labor up to 90 hours per week, wield large powered saws and knives, and work around bleach and dry ice.

The defense argued that company policy and the firing of some minors reflected Rubashkin's desire to keep children from working at the plant and that minors had tricked the company with false documents.

Rubashkin's defense team repeatedly reminded the jury that the evidence had to show beyond a reasonable doubt that Rubashkin "intentionally, deliberately and knowingly" allowed children inside Agriprocessors, not just that they worked there.

Jury foreman Quentin Hart, a Waterloo city councilman, said the legal bar ultimately proved too high for the state. The evidence did not provide a clear line between Rubashkin and the alleged hiring of minors to work at the plant, he said.

The testimony of the young workers served as a key tipping point, he said. For weeks, fresh-faced Guatemalans and Mexicans told the jury that they had lied about their identities and had presented false documents to get jobs at the slaughterhouse.

"Each one of them indicated they didn't tell the truth, and indicated they knew they had to be over the age of 18 to get a job, so they acquired documentation from somewhere else," Hart said.

The case was unprecedented in the number of charges brought in a child labor case. In 2008, the state charged five company officials each with 9,311 child labor violations.

The state whittled the list to 83 charges in May, in part to make the cost and length of the trial more manageable. The judge dismissed another 16 counts last week when the state didn't bring five witnesses listed on the complaint to testify.

Many of those involved in the trial said that regardless of the jury's decision, the case served as a call to justice for the most vulnerable in society.

Hart emphatically stated that the case highlights the need for comprehensive immigration reform.

"It was a bad situation," he said. "We have a lot of people where we can't necessarily change what goes on in their countries. But we need to take a holistic look when looking at this challenge of immigration."

Sister Mary McCauley, who assisted many of the workers at St. Bridget's Catholic Church in Postville, called the case a "desperate cry" for immigration reform. She said the verdict made her heartsick, because "once again it is the little people that have been hurt."

"I think they were hurt at Agriprocessors, they were hurt by circumstances in their own country, and now they have been hurt by the verdict," she said.

Deputy Iowa Attorney General Thomas H. Miller said the humane treatment of workers in Iowa, regardless of their legal status, must be guarded because the laws of Iowa reflect the values of its people.

"There were not only wholesale violations of Iowa's child labor law," he said. "There was abundant evidence to support the claim that there was extortion, sexual abuse and forced labor committed against the population of workers at Agriprocessors."

After the verdict was read, District Associate Judge Nathan Callahan said the prosecution had served notice to employers across the state that child labor will not be tolerated. For that alone, he said the case was "worth every penny" the state spent.

"In my view, really, a clarion call from the trial is that in this day and age there is no excuse for having children in an occupation of this nature," he said.

Rubashkin faces a stiffer sentence for financial fraud, but his family, who are devout Hasidic Jews, said the heinous nature of the child labor charges carried greater moral weight.

"The seriousness of the crime, in a moral sense, was much stronger in this case," said his son, Getzel Rubashkin.

The jury's decision in the child labor trial bolsters Rubashkin's appeal on his financial fraud conviction, said Guy Cook, one of his attorneys.

Rubashkin's attorneys have argued that the judge in the financial fraud trial tainted the jury by allowing evidence that he hired illegal immigrants without allowing a vigorous defense of the allegations. 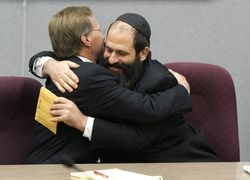 WATERLOO --- Considering the evidence in the state's child labor case against Sholom Rubashkin was no small task, according to the Waterloo City Council member who served as the jury's foreman.

"It's kind of tough to call because you want to make the right decision. But what we had to go on was the testimony, the materials given within the court case," said Quentin Hart said.

Rubashkin was charged with 67 counts of child labor violations in connection with underage workers at the Agriprocessors meatpacking plant.

Monday afternoon jurors acquitted him of all counts.

Jurors deliberated Friday and returned Monday morning. After ordering in lunch and taking a short break, they announced they had reached a decision at about 12:50 p.m.

In explaining the verdict, Hart noted that all 26 former underage workers who testified said they had submitted false paperwork that made it appear they were over age 18 when they applied. He also noted that company officials had hired underage workers it found in 2007.

"There never was any clear line of communication between Sholom about him knowing that the 26 on there were underage. That was a little challenging," Hart said.

He said the case showed a need to focus on immigration.

"We as a community, a state, a country need to take a look into those situations, because you have young people, older people in there seeking a better opportunity and having to hide who they are to maintain some type of citizenship," Hart said.

Deputy Attorney General Thomas H. Miller said it was a complicated case, but prosecuting it sent the message that child labor violations won't be tolerated.

"We're disappointed of course. We felt this was a fight that needed to be fought," Miller said.

Defense attorney F. Montgomery Brown called the jury "courageous" and said the verdict was an unprecedented upset writes "a wonderful new story for Sholom and his family. ... And that story is his being vindicated as a human being that did not want minors working in his father's plant." 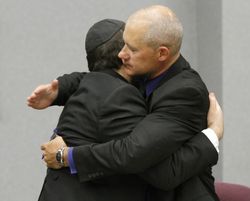 The former manager of a kosher slaughterhouse in Iowa that was the site of a 2008 immigration raid was acquitted on Monday of criminal charges that he knowingly employed under-age workers at the plant.

Sholom Rubashkin, the former slaughterhouse manager, and a defense lawyer, Mark Weinhardt, after hearing the verdict.

After a five-week trial in state court in Waterloo, Iowa, the jury rejected prosecutors’ arguments that the manager, Sholom Rubashkin, had seen many warning signs that child laborers were working on production lines at the Agriprocessors plant. The jury, after about 12 hours of deliberations, found Mr. Rubashkin not guilty of all 67 charges of child labor violations.

“The key was whether the state had evidence that Mr. Rubashkin actually knew that minors were working in the plant and willfully permitted that condition to exist,” said Mark Weinhardt, a defense lawyer. “The state simply did not have evidence to prove that.”

The verdict brought rare good news for Mr. Rubashkin since the raid at the plant in Postville on May 12, 2008, when federal agents arrested 389 illegal immigrants, most from Guatemala. The operation became an emblem of the high-profile immigration enforcement strategy under President George W. Bush.

In November, Mr. Rubashkin was convicted in federal court in Iowa of 86 counts of bank fraud in connection with loans to Agriprocessors. Federal prosecutors are seeking a 25-year sentence on those charges. Sentencing is scheduled for June 22.

Iowa’s child labor case was the only criminal action against Mr. Rubashkin arising from the large number of illegal immigrants who were employed at the plant. After winning the financial fraud conviction, federal prosecutors dismissed all immigration-related charges against him.

The trial testimony left no doubt that at least 29 under-age laborers, and probably many more, were working on the slaughter and packing lines at the Agriprocessors plant. Nilda Nuritza Rucal testified that she was put to work without training on the day she was hired, taking feathers off chickens with sharp scissors. She said she was 15 at the time.

Another immigrant, Elmer Isaías López Marroquín, testified that a human resources manager at the plant instructed him to lie about his age to state inspectors. He said he was 16 when he started to work on the plant’s killing floors.

When they were hired, the under-age workers presented false documents showing they were at least 18, the legal age to work in production areas of Iowa slaughterhouses, according to testimony.

The jury foreman, Quentin Hart, a Waterloo councilman, said after the trial that the jurors doubted the young immigrants’ credibility. “Each one of them indicated they didn’t tell the truth and indicated they knew they had to be over the age of 18 to get a job, so they acquired documentation from somewhere,” Mr. Hart said, according to The Associated Press.

Thomas H. Miller, the Iowa deputy attorney general in charge of the criminal bureau, said prosecutors were disappointed with the verdict. “When we had this many minors working on a slaughterhouse floor, we felt this was a fight that needed to be fought,” he said.

F. Montgomery Brown, another defense lawyer, said of the acquittal, “This is a vindication by a courageous jury that Sholom is not the kind of man who would want minors working” in the plant.

The end of the case is likely to be bitter for many of the 29 young immigrants who agreed to testify in the state trial, including seven who were flown back from Guatemala by prosecutors. While a handful of them received special United States visas for victims of abuse, most had temporary immigration status that expires now that the trial is over.

But the State of Iowa did not charge Agriprocessors or any of its executives, supervisors or employees with those crimes.

The same reason it would not call witnesses who spoke to Rubashkin about the child laborers in Agriprocessors: money.

As I noted yesterday, the state tried to do this prosecution on the cheap, and that decision is what allowed Rubashkin to skate.

"There were not only wholesale violations of Iowa's child labor law. There was abundant evidence to support the claim that there was extortion, sexual abuse and forced labor committed against the population of workers at Agriprocessors."