During the conference call meant to take the place of a national convention, Young Israel's national leaders repeatedly refused to discuss plans to expel a member congregation and seize its assets. In response, a delegate made a motion of no-confidence in the National Council’s leadership. With that, the national leaders hung up, leaving delegates from across the country puzzled and upset.

One of Agriprocessors and Sholom Rubashkin's biggest backers during the past four years has been Rabbi Pesach Lerner, the executive vice president of the National Council of Young Israel.

Now Lerner's own questionable actions are coming into the spotlight: 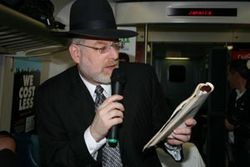 In the wake of an unprecedented move by the National Council of Young Israel to expel a member congregation in upstate Syracuse, a rebellion is brewing among some of the Orthodox congregations affiliated with the movement.

The challenge to the National Council surfaced during a conference call last Thursday with representatives of the organization’s nearly 150 member congregations.

At the end of what was described as a contentious call — during which National Council leaders repeatedly refused to discuss plans to expel a member congregation in Syracuse — one synagogue representative made a motion of no-confidence in the National Council’s leadership. With that, the national leaders hung up, leaving synagogue representatives puzzled and upset, according to those on the call.

Levine said that everyone else on the call was upset, ranging from “clearly disturbed to outraged.”

The planned vote on the expulsion of Shaarei Torah Orthodox Congregation of Syracuse — and possible legal action to seize the synagogue’s assets — was said by the National Council to be over the synagogue’s failure to pay $20,000 in back dues. The National Council withdrew the matter at the last minute to permit time for a negotiated settlement, and cited those talks as the reason for its refusal to discuss the matter with The Jewish Week.

It did issue a statement late Tuesday, however, in which it said it does not “debate our internal issues publicly,” that it has “no intention of closing a synagogue” and is “guided by the constitution of our organization with the direction of our board of directors and Young Israel Council of Rabbis Halacha committee.”

The Syracuse congregation, however, contends that the real reason for the planned expulsion was its election of a woman president several years ago. Its president, Dr. Beverly Marmor, the second consecutive female lay leader of the congregation, said that although there were rabbis who had wanted to work out a financial settlement in recent days, that ended “because of the chaos of the moment.”

The proposed settlement was said to have had the Syracuse congregation pay at least part of its back dues to the national body, which in turn would drop its alleged complaint about having a woman at the helm.

At least two other Young Israel congregations have had women presidents, but this is believed to be the first time the National Council has sought membership approval to take legal action to stop it.

The action comes at a time when the National Council appears to be moving more and more to the right religiously, a move some of its member congregations are apparently not prepared to make.

Founded in 1912 and considered a modern-to-centrist “Torah-true” movement within American Orthodoxy for most of its history, the National Council in recent years is viewed as increasingly in the haredi camp, having moved to the right both politically and religiously.

Rabbi Pesach Lerner, the group’s chief executive, has made the campaign to free Jonathan Pollard, who spied for Israel and is serving a life sentence, a major cause for the National Council. And rules put into effect three years ago by the organization’s Council of Rabbis Vaad Halacha [committee on Jewish law], have upset the leaders of a number of Young Israel congregations who say they did not sign on for the restrictions when they joined the national group.

Several of those leaders interviewed cited in particular an August 2007 letter that included the following in which the organization said there were a series of new regulations:

*  Synagogue presidents must be male and Jewish from birth;

*  Family memberships may not be granted if a spouse is not Jewish;

*  Women may no longer read the Megillah during a prayer service;

*  The Young Israel Council of Rabbis must approve anyone employed by a Young Israel congregation as a rabbi.

The last one was widely believed to be a mechanism to prevent a graduate of Yeshivat Chovevei Torah yeshiva, founded by Rabbi Avi Weiss, from gaining a pulpit at a Young Israel synagogue, though Rabbi Lerner has denied that.

“Nobody knows who is making these decisions and who are the halachic authorities,” said one Young Israel synagogue president. “If you are in Syracuse, maybe a woman president is your only option. Maybe a different standard should apply in New York City; you cannot make uniform standards. We have common values, but you can’t impose arcane values.”

The ban on women synagogue presidents, he continued, “is just wrong and offensive and not politically correct or acceptable.”

The synagogue president pointed out that the National Council has not held a membership convention for at least 10 years, preferring instead to convene meetings of member synagogues through telephone conference calls.

“This issue has now exposed the underbelly of the way” the National Council is run, he added. “We’re a civilized, knowledgeable group of people who have finally said enough is enough. We can’t exist under duress and fear of retribution” if we go off the reservation.

“We must live under an organization that follows rules, is transparent and meets the needs of its constituents,” the synagogue president continued. “We’re here to stand up for one of our own, a poor shul in Syracuse — the only bastion of Orthodox Judaism in upstate New York — that is trying its hardest to preserve itself. And here is a national organization trying to tell them how to operate. Where were [the national leaders] when [the synagogue members] needed them?”

This appears to be the first open rift in the nearly 100-year-old organization.

There is no known precedent of an extant Jewish congregation in this country becoming the object of, in effect, a hostile takeover by a national group like the National Council, Marc Stern, counsel and acting executive director of the American Jewish Congress told The Jewish Week. “Because most shuls are freestanding bodies and their membership in national bodies is loose, it doesn’t happen often.”

“We’re in the process of putting together a formal response to the National Council,” said the president of a member congregation who asked for anonymity because the response had not been finalized.

“We believe in the right of a synagogue to self-determination and to promote its values as opposed to trying to defend ourselves against a national organization that is imposing standards on local branches,” he said. “If a synagogue doesn’t want to be a member, it should have the right to resign without retribution.”

“We were told that if our [woman president] did not resign immediately, they would sue us for having used their name for years and would also claim our assets,” Marmor said, noting that the synagogue owns its building, a parsonage and at least three Torah scrolls.

Although Marmor said her synagogue sent a letter to the National Council informing it of the resignation and a name change from Young Israel-Shaarei Torah of Syracuse, the National Council hired an attorney who wrote back to say that the organization’s constitution bars a member congregation from resigning its membership and affiliation.

The letter also instructed the congregation to confirm its continued membership and “cease and desist from any further effort to operate as an independent Orthodox synagogue...”

Marmor said her synagogue has ignored the letter.

“This is the United States of America,” she said. “Whoever heard that you can’t resign from a voluntary organization?”

But the National Council does have the authority to expel a member and seize its assets, according to the organization’s constitution. Marcia Eisenberg, general counsel of the Jewish Community Relations Council of New York, said that synagogues that join the organization agree to abide by it.

“When you are part of the movement, there are certain obligations on both sides,” she said. “If they have signed a contract [to join], they have to be bound to it.”

Eisenberg noted that the other national congregational movements — including the Orthodox Union, the United Synagogue of Conservative Judaism and the Union of Reform Judaism — are “much looser” with respect to their synagogue affiliations.

During the conference call meant to take the place of a national convention, Young Israel's national leaders repeatedly refused to discuss plans to expel a member congregation and seize its assets. In response, a delegate made a motion of no-confidence in the National Council’s leadership. With that, the national leaders hung up, leaving delegates from across the country puzzled and upset.
Failed messiah was established and run in 2004 by Mr. Shmarya (Scott)Rosenberg. The site was acquired by Diversified Holdings, Feb 2016.