The long-time practice by Israeli ritual circumcisers (mohelim) of using gauze for as long as 26 hours to stop penile bleeding is responsible for the significantly higher rate of urinary tract infections (UTIs) within a few weeks of the Jewish ritual.

From the test tube to the bedside 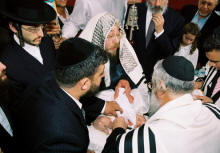 The long-time practice by Israeli ritual circumcisers (mohelim) of using gauze for as long as 26 hours to stop penile bleeding is responsible for the significantly higher rate of urinary tract infections (UTIs) within a few weeks of the Jewish ritual.

According to pediatricians and infectious diseases experts at Jerusalem’s Shaare Zedek Hospital, by adopting a different, yet simple medical technique for stanching the bleeding, many UTIs can be prevented. Drs. Ori Toker, Shepard Schwartz, Gershom Segal, Nadia Godovitch, Yechiel Schlesinger and David Raveh published their findings in the May issue of the Israel Medical Association Journal (IMAJ), along with an editorial by Dr. Jacob Amir, a pediatrician at Schneider Children’s Medical Center in Petah Tikva.

According to standard medical practice, a newborn infant who develops a fever must be hospitalized for observation in case the baby has developed meningitis (an inflammation of the meninges covering the brain) or other serious infection. This requires a painful spinal tap with a needle to remove a sample of cerebrospinal fluid through the baby’s back, and a few days of hospitalization until the fever subsides. This type of hospitalization is costly for the health system, and frightening and exhausting for parents.

Studies conducted abroad have showed that UTIs were infrequent when a physician performed the circumcision, even outside a hospital or clinic, compared to the rate among Israeli males circumcised by a mohel. The difference, the authors suggested, was in the method used to stop the bleeding. While mohalim wrap the penile shaft in gauze, thus raising the risk of urine retention that can lead to infection, physicians stop the bleeding by briefly applying pressure with a gloved hand, using calcium-sodium alginate fiber and adding a “wound cavity dressing” that disintegrates in two to three hours.

In his editorial, Amir urged that Israeli ritual circumcisers – supervised by a joint committee of the Health and Religious Services Ministry – be persuaded to change the way they stop the bleeding (called hemostasis in medical jargon), an aspect of brit mila that is not dictated by Jewish law. If they “adopt the hemostasis technique used by physicians – or at least shorten the duration of the shaft wrapping” – the number of UTIs and resultant hospitalizations could be minimized, he wrote. “The unique phenomenon of the high rate of UTI in male infants in Israel seems to be related to the traditional technique of hemostasis. It is time to improve the practice of traditional circumcision.”

After being asked to comment, the Health Ministry told The Jerusalem Post it would seriously consider the recommendations in the journal articles and decide whether to ask the Religious Services Ministry to direct mohalim to change their hemostasis techniques.

The Shaare Zedek team studied the medical records of 449 newborns up to the age of four weeks who were brought with fever to the hospital’s pediatric emergency room between 1997 and 2006. All underwent urine cultures for UTIs, and the 290 with a positive culture had cultures taken of their cerebrospinal fluid. Their parents were asked if the infants had recently undergone circumcision and, if so, whether it had been performed by a non-physician mohel.

After eight days of life, 24.7% of circumcised boys who had fever were found to have UTIs, compared to 8.4% of girls of the same age. Meningitis was found to be very rare.

Mohalim have already changed some of their methods out of health considerations. For example, they abandoned direct sucking by mouth of the bleeding organ to avoid giving or getting hepatitis B or C, or HIV infections, and instead suck through an hourglass-shaped glass tube in which cotton wool is inserted to prevent transmission of pathogens in either direction.

Posted at 04:05 AM in Israel, Med-Ethics, Public Health | Permalink

The long-time practice by Israeli ritual circumcisers (mohelim) of using gauze for as long as 26 hours to stop penile bleeding is responsible for the significantly higher rate of urinary tract infections (UTIs) within a few weeks of the Jewish ritual.
Failed messiah was established and run in 2004 by Mr. Shmarya (Scott)Rosenberg. The site was acquired by Diversified Holdings, Feb 2016.