Stanley Z. Levitt allegedly abused boys at the Maimonides school in Brookline and at a Chabad synagogue in Philadelphia run by co-head of international Chabad movement, Rabbi Avraham Shemtov. 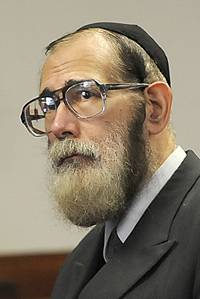 The Suffolk County district attorney says a rabbi who once taught at a Boston-area school faces another child assault charge.

Authorities said Sunday that Stanley Z. Levitt was charged with indecent assault and battery on a child. The 64-year-old Levitt is expected to be arraigned Wednesday in Suffolk Superior Court.

Levitt was arraigned last year on four counts of indecent assault and battery on a child. Prosecutors say he assaulted two boys about 11 years old who attended the Maimonides School in Brookline where he taught between 1974 and 1977.

Prosecutors say the third person approached them after reading media accounts. Authorities say he also was a sixth grader at the school that employed Levitt in the mid-1970s.

It was not clear if Levitt is represented by a lawyer.

Rabbi Abraham Shemtov -- who has overseen Lubavitch efforts in the region for decades and who chairs the movement's umbrella body -- said that Levitt used to attend his synagogue, but that he no longer does.

Tell that to the boys he sexually molested in Shemtov's synagogue.

Stanley Z. Levitt allegedly abused boys at the Maimonides school in Brookline and at a Chabad synagogue in Philadelphia run by co-head of international Chabad movement, Rabbi Avraham Shemtov.
Failed messiah was established and run in 2004 by Mr. Shmarya (Scott)Rosenberg. The site was acquired by Diversified Holdings, Feb 2016.