Former pastoral administrator of St. Bridget's Catholic Church in Postville, who helped to provide support for families affected by the Agriprocessors raid, was praying for justice 'for the little people.

Former pastoral administrator, who helped to provide support for families affected by the Agriprocessors raid, was praying for justice 'for the little people. 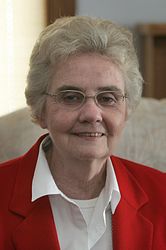 "I was heartsick," she said. "I had to just sit and deal with the heartbreak I was feeling."

On Monday, the former pastoral administrator at St. Bridget's Catholic Church in Postville, Iowa, learned that her prayers for justice had gone -- for the time-being -- unanswered.

A jury recently acquitted former Agriprocessors Inc. executive Sholom Rubashkin on 67 misdemeanor counts of child-labor violations. Prosecutors had said that the man who once led the nation's largest kosher meatpacking plant had knowingly hired underage workers and that he allowed them to work in deplorable conditions.

These charges -- as well as financial fraud charges -- came about after a May 2008 immigration raid at the slaughterhouse, where 389 workers, including children, were arrested. McCauley, 71, worked to support those affected. After her retirement, the Dubuque resident continued to travel the nation to plead for comprehensive immigration reform.

Here's what she had to say about the verdict and its impact on her work:

Question: What did you do when you heard the verdict?

Answer: I came directly home so I could be in touch with the staff at St. Bridget's. I wanted to provide them with words of support and encouragement. But I also needed some time to sit and deal with the heartbreak I was feeling.

Question: What was your reaction to the verdict?

Answer: I was very disappointed, and I still am. I am heartsick over it. Once again, it is our (Postville) people who were hurt. They were desperate in their home country and needed to come to the United States to secure money for their families, and they were hurt yet again.

Question: Were you able to attend the trial?

Answer: I was able to be present for several days of the trial, and throughout, I was very proud of the witnesses who were minors who were able to testify. Yes, they did falsify their date of birth on their work documents because of their desperate situation, but I find it hard to believe that the administration of that plant was unaware of their employment or their age. And their situation is still desperate. Some of the witnesses had their pictures taken the day of the raid, and then they were deported back to Guatemala and Mexico, and as they were on the witness stand, their weight loss was extremely evident.

Question: What message do you think this acquittal sends?

Answer: Some members of the general public are going to be elated that the people who came here illegally did not win, in a sense. For others, like myself, it was a call to have a greater determination to continue pursuing justice for the little people. I hope the reaction is that what happened in Postville -- the suffering experienced at Agriprocessors -- will not have to happen in any other place. I see it not as a call to lose heart, but as a call to keep hope, to stand together. We need to change our immigration policy, and further than that, we need to work with developing countries so they do not have to leave their native countries because of a hunger situation.

Question: What message do you want to send about the verdict?

Answer: If we in the United States of America want to say that we have a value system that includes respect, freedom and justice, then we cannot let a product -- be it machinery, beef or whatever -- take precedence of their value of a person. Yes, we were disappointed by what happened (in court), but we must regain our composure and decide what we can do to seek justice. So, last night, I was pretty discouraged. Today, I am filled with a renewed determination. I have to hope. I cannot lose hope. I have to hope that this decision will stir within people a desire to work for immigration reform.

Former pastoral administrator of St. Bridget's Catholic Church in Postville, who helped to provide support for families affected by the Agriprocessors raid, was praying for justice 'for the little people.
Failed messiah was established and run in 2004 by Mr. Shmarya (Scott)Rosenberg. The site was acquired by Diversified Holdings, Feb 2016.