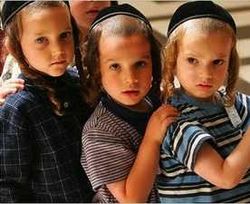 Israeli society is comprised of a variety of factions, which can be distinguished – among other things – in their approach towards advance technology. The state educational system encourages its students to make use of technological tools, and many schools offer computerization and programming classes.

There is one wide public, however, whose children are relatively disconnected from advance computer studies in general and programming in particular, and that is the ultra-Orthodox public.

Beyond the traditional reason and the uneven combination of Bible and secular studies in educational institutions, there is another significant cultural barrier – the language.

The language, which operates on textual and graphic interfaces, allows the creation of basic three-dimensional animation films. The films are written using existing objects, pre-defined scripts and additional components.

This programming language is simple and highly accessible, and even the conditions dictating the relation between each element in the program are written in a language meant for children. Yiddishe Mama is an Yiddish version of Mama, an educational programming language operating in the Alice environment.

Mama was developed by Eytam about five years ago, and was recently upgraded and adjusted to a graphic interface with three-dimensional capabilities. The original software is already being used by the educational system. In order to provide the children with a pleasant studying experience, the software focuses on animation, clips and games.

Each teen educated their way

"We initially developed the Yiddish version as a tool for elderly people interested in studying programming, in a bid to make the studying process easier for them," Eytam CEO Meir Sela told Ynet. "Later on, we decided to appeal to the haredi audience, which is also becoming increasingly interested in technological studies for preschoolers."

Programming for kids in variety of languages

Sela believes that educational programming languages should be adjusted to the mother tongues of their target audiences. "As programming languages include many concepts and terms which may be confusing, the child may make a mistake without knowing if it is the result of an operation failure or a simple translation error," he explained.

Consequently, the Mama language was built in a form in which all of its components – the interface, the rules and more – can be translated in a built-in and relatively simple way.

Yiddishe Mama includes expressions, buttons and even error messages in the traditional Ashkenazi language. "Yiddish is relatively easy to translate," said Sela. "There are many words which do not exist in Yiddish, and originate in English, and due to the language's structure they are simply entered as they are with the correct accentuation."

It's no secret that, despite the relative social seclusion, the haredi sector does not stagnate and adopts – in its own way – certain modern technological tools. The ability to teach haredi schoolchildren the secrets of programming, without hurting their tradition and language, is a blessed innovation.

The company is currently working on a version in Arabic as well, in order to make it easier to reach programming in Arab schools in Israel. Eytam was surprised to learn that, at this stage, the Arab sector prefers to use the Hebrew version of the software.

But the company eyes additional potential markets for the Arab version is it working on. "We are not ruling out distributing this version to countries like Jordan and Egypt," said Sela. "These countries also have a trend of technological education, and the Mama language may be suitable for their children."

The development of the software's Yiddish version was completed only several days ago, and the company has just begun offering it to potential customers. The haredi representatives approached by Meir Sela and E

The Eytam Computer Science company has developed an improved programming language: Yiddishe Mama, an education programming language for children – in Yiddish.
Failed messiah was established and run in 2004 by Mr. Shmarya (Scott)Rosenberg. The site was acquired by Diversified Holdings, Feb 2016.