Letter from Jerusalem: An Eloquent Racist

In the early 1950s, the young Eliyahu was imprisoned for his membership in a group that collected arms and firebombs with the intention of imposing Torah law on the young state of Israel.

In the early 1950s, the young Eliyahu was imprisoned for his membership in a group that collected arms and firebombs with the intention of imposing Torah law on the young state of Israel. 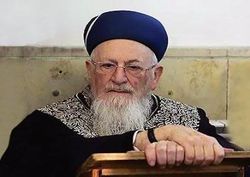 Fourteen years ago I sat waiting outside the door to Rabbi Mordechai Eliyahu's office, not entirely sure what to expect. I was just beginning my journalistic career, and only a few weeks earlier had been given my first real beat: reporting on religious affairs and the Haredi community for a local Jerusalem weekly.

A family member had offered to set up a meeting for me with the former chief rabbi, not for an interview but an off-the-record conversation. Perhaps he thought I could use the spiritual guidance. My first surprise upon entering the room was seeing that, in private, the rabbi didn't wear his brocaded Rishon Letzion gown and blue turban, but was dressed instead in conservative black trousers and a white shirt. The next surprise was discovering how well-versed the man was in all matters of politics and media. Every senior rabbi I'd ever met before then had kept up an appearance of being removed from such earthly matters. I was just starting out then in my profession, I remind you.

We had a short but pleasant discussion and just before my time was up he asked what stories I was working on. Hesitantly I told him I was looking into allegations regarding a senior dayan, who was rumored to be misusing public funds. I thought he might scold me for gossip-mongering - the dayan was after all a former colleague of his on the Rabbinical High Court - so I did not mention his name. Rabbi Eliyahu looked at me with an impish smile. "You mean Rabbi D.? That's OK, you can write about him," he said. And then I was ushered out.

That was my only personal meeting with Rabbi Eliyahu, who passed away on Monday, but I must have seen him, from afar and up-close, at dozens of events over the years. The first time I ever heard him speak was in the late 1980s, while he was still chief rabbi, at a memorial ceremony for a yeshiva student who had been stabbed to death in Jerusalem's Old City. I can't remember a word Eliyahu said, but the fire and brimstone tone of his sermon left an indelible impression. He poured holy rage on the heads of the Arab terrorists and, expecting yet another yawn fest, we were astonished and excited to hear such explicit words coming from a respected rabbi.

Only 15 years later, while conducting research for a biography on the life of Eliyahu's archrival, Rabbi Ovadia Yosef, did I realize that throughout his stellar rabbinical career - which included becoming the youngest dayan in Israeli history at the tender age of 30 - Eliyahu was also a consummate politician.

In the early 1950s, he was still a firebrand and was sentenced to 10 months in prison for his membership in an ultra-Orthodox underground group that collected arms and firebombs with the intention of imposing the laws of the Torah on the young state. Upon his release, however, he changed tack and quickly aligned himself with the influential Chief Rabbi Yitzhak Nissim and the politicians of the Mizrahi Party. Decades later, he admitted in an interview that his underground activity was wrong but added, "I haven't changed my views, but the path I chose then was mistaken."

His rise to the top of the rabbinate was due not only to his fierce intellect and oratorical powers, but also his political skills and instincts. I'm not sure when it first dawned upon me that Eliyahu was also a racist. Perhaps it was when I learnt of how close he had been to Rabbi Meir Kahane, the slain leader of the religious-fascist Kach Party. Eliyahu had passionately eulogized Kahane at his funeral in messianic terms and also wrote a glowing preface to one of Kahane's books in which described the rabble-rouser as a man to whom "the path of God was always his leading light."

It was hard to come to terms with his racism because he always struck me as an urbane and relatively "open" rabbi. He had an instinctive understanding for whoever he was in contact with, capable of holding discussions with anyone without giving off an impression of condescension, as do most ultra-Orthodox rabbis. His halakhic rulings were also surprisingly moderate for a man of his background. Instead of being based on the strict letter of Jewish law, they were compassionate and tailor-made to the Jew asking the question, not the rabbi delivering the answer.

I remember one answer he wrote to a man whose daughter had ceased to be religious. My daughter and her son live in another city and will only visit me on Shabbat, he told Eliyahu, but that means they will desecrate the holy day by driving to my home by car and I can't have that on my conscience. In warm terms, the rabbi assured him that keeping his family together and staying in contact with his daughter and grandson were the paramount concern - his home must remain open to them no matter how they arrive.

Eliyahu's compassionate manner to Jews from all walks of life and religious persuasion made his racist utterances all the more disturbing. He ruled, for example, that Jewish settlers in the West Bank can harvest the olive trees of their Palestinian neighbors and steal their crops as the land inherently belongs to the Jewish people. He repeatedly told a packed audience at the Mercaz Harav Yeshiva following the terror attack there that "even when we seek revenge, it is imperative to remember that a thousand Arabs are not worth one yeshiva student." During Operation Cast Lead in Gaza he wrote to the prime minister at the time, Ehud Olmert, that there was nothing wrong with indiscriminately bombing and killing Palestinian citizens if this would make the battlefield safer for Jewish soldiers.

With Rabbi Eliyahu, everything was part of a deeper religious ideology. His statements were measured and considered, they did not stem from emotion. He fostered a generation of rabbis in the national-religious camp for whom this particular brand of Jewish racism is a matter of instinct. But not all the rabbis and politicians who rushed to eulogize him this week share these views. Many of them find them abhorrent.

In the old Jewish tradition, however, after the death of a great rabbi not a word can be mentioned against him. How many more young impressionable religious Israelis will fall under the spell of silver-tongued racists before they speak out?

Letter from Jerusalem: An Eloquent Racist

In the early 1950s, the young Eliyahu was imprisoned for his membership in a group that collected arms and firebombs with the intention of imposing Torah law on the young state of Israel.
Failed messiah was established and run in 2004 by Mr. Shmarya (Scott)Rosenberg. The site was acquired by Diversified Holdings, Feb 2016.