Israel Develops Tomato Worth More Than Its Weight In Gold–Literally

The seeds for the yellow cherry tomato, a fruit researchers feared might turn off consumers, now sell for $160,000 a pound.

A tomato breeder has created a crop worth more than its weight in gold. The seeds for the yellow cherry tomato, a fruit researchers feared might turn off consumers, now sell for $160,000 a pound.

Reporting from Berurim, Israel — — If Willy Wonka had a farm, it would fit right in here in Israel. 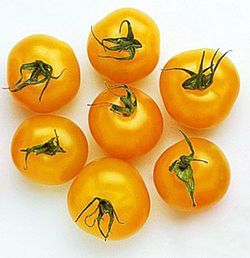 Want a lemon-scented tomato or a chocolate-colored persimmon? How about some miniaturized garlic cloves for the home chef who doesn't have time to chop, or a purple potato that tastes buttery when cooked?

There are no chocolate rivers or edible teacup flowers on Israeli farms, but you will find carrots shaped like potatoes, strawberries shaped like carrots, star-shaped zucchini and "watermelon" tomatoes — dark green on the outside with a juicy red flesh.

There are also specially bred red peppers with three times the usual amount of vitamins, and black chickpeas with extra antioxidants. Not to mention worm-shaped berries and blue bananas.

Though some mock such colorful crops as "frankenfruit," an Israeli tomato breeder, Hazera Genetics, has created a boutique crop worth more than its weight in gold.

The former kibbutz developed a yellow cherry tomato that its own researchers feared might turn off consumers. Instead, the hybrid became a hit in Europe, where the seeds sell for about $160,000 a pound.

Bolstered by Hazera's success, a growing number of Israeli farmers, agricultural companies and government-funded research institutions are jumping into the market for freaky fruits and designer veggies, hoping to stumble upon the next big thing.

"It's fun, it's interesting and it brings in the customers," said Uri Rabinowitz, a Tel Aviv-area farmer who has developed a national following for his strange-looking crops, including elongated strawberries and round carrots. "You can charge twice as much."

Rabinowitz and other Israeli farmers grow exotic fruits and vegetables from imported seeds, including the chocolaty persimmon from Latin America (which makes a tasty ice cream) and the buttery potato from the Netherlands.

Some are trying to create new foods in the lab. A team of Israeli and U.S. scientists created the lemon-scented tomato by splicing genes from lemon basil into tomatoes, producing an aroma and taste of lemons and roses.

Efraim Lewinsohn, who has helped lead the project to develop the lemon tomato at Israel's Volcani Agricultural Research Institute, said the goal was to inject a little spice into tomatoes that had become bland from years of mass production.

"People complain that tomatoes don't taste like they used to," Lewinsohn said. "That's the driving force behind this project: attempting to restore the flavor of the past."

Israel Develops Tomato Worth More Than Its Weight In Gold–Literally

The seeds for the yellow cherry tomato, a fruit researchers feared might turn off consumers, now sell for $160,000 a pound.
Failed messiah was established and run in 2004 by Mr. Shmarya (Scott)Rosenberg. The site was acquired by Diversified Holdings, Feb 2016.