Chabad supporter arrested for assaulting a secular teenage protester. "Stop messing with our kids. Recognize the parents' right to educate their children according to their own beliefs and stop your missionary activities."

Hundreds rally in Ramat Aviv: Haredim, leave us be

Some 800 residents of north Tel Aviv neighborhood protest outside local Chabad House, call on ultra-Orthodox to 'acknowledge right of parents to educate their children according to their own beliefs' 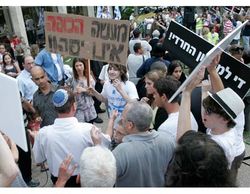 A week after Tel Aviv Mayor Ron Huldai criticized Chabad's activity in Ramat Aviv, some 800 of the neighborhood's residents demonstrated Monday evening against the attempt by the ultra-Orthodox movement to influence local secular teens.

During the rally, which was organized by the Free Ramat Aviv foundation and held outside the Chabad House in the center of the neighborhood, protesters waved signs reading, "Stop the haredi mission" and "Haredim, leave our children alone."

A number of confrontations between protesters and Chabad members were reported. "Ramat Aviv is leading the process whereby seculars are showing that they too know how to organize against the attempt to take control of their lifestyle," Deputy Mayor Meital Lehavi said during the rally.

"(We are calling on the haredim) to stop messing with our kids. Recognize the parents' right to educate their children according to their own beliefs and stop your missionary activities. 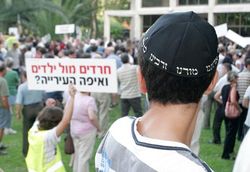 "Apart from conveying this message, we must act to change legislation in the Knesset in order to prevent spiritual peddling within the same religion," she said. "We've reached a point where secular Judaism and religious Judaism are no longer considered the same religion. The main message should be 'live and let live'."

Councilman Reuven Ladiansky told the crowd, "We've come here to say no more! No more harassment! No more religious coercion! Every Friday the Chabad members wait for Alliance High School students at a grove near the school. They harass them and try to persuade them to put on tefillin and attend Torah classes. We must prevent this activity."

Knesset Member Nitzan Horowitz (Meretz) told Ynet, "This campaign is not against the haredim, it is against organizations that try to disrupt the lives of residents by employing illegal means."

Some Ramat Aviv residents, among them several seculars, held a counter-rally in support of Chabad. Yarmulke-clad children handed out flyers with a message to the mayor: "We, the secular and traditional residents, express our and the general public's support for Chabad's institutions, which have been operating in Ramat Aviv for over a decade. The Chabad yeshiva opens its doors to all Jews and serves as a learning center for secular and religious Jews alike. Unfortunately, the discourse in our peaceful neighborhood has recently deteriorated to mudslinging and scheming against the Chabad community."

During the rally, a Chabad supporter was arrested for slapping a teenager.

Chabad supporter arrested for assaulting a secular teenage protester. "Stop messing with our kids. Recognize the parents' right to educate their children according to their own beliefs and stop your missionary activities."
Failed messiah was established and run in 2004 by Mr. Shmarya (Scott)Rosenberg. The site was acquired by Diversified Holdings, Feb 2016.