How Rubashkin Beat The Rap

Iowa's Deputy Attorney General said that Judge Nathan Callahan had barred his team from arguing that Rubashkin’s employment of illegal immigrants made him necessarily culpable for the hiring of minors. “Our intention was to present that evidence and point out that when the only evidence of age is the date of birth on a document that you reasonably know to be a forgery that you are at least willfully blind as to the age of your workforce.”

By Josh Nathan-Kazis • The Forward

Supporters of former Agriprocessors executive Sholom Rubashkin are hailing his acquittal in Iowa state court of child labor charges, saying that the jury’s decision offers a measure of vindication for the embattled kosher slaughterhouse manager.

Rubashkin, son of the founder of Agriprocessors and former chief manager at the company’s kosher meat plant in Postville, Iowa, was acquitted June 7 of 67 misdemeanor counts of child labor violations. Rubashkin is still awaiting sentencing in federal court, where he was convicted of bank fraud.

“I would hope that this is at least one small step in terms of at least giving the public some pause when they reflect upon who Sholom Rubashkin is,” said Alyza Lewin, an attorney who is representing Rubashkin in an effort to appeal the federal conviction. “He was painted as public enemy number one, as a person who was really truly evil. And I think that this decision, this verdict, begins at least to show the public that that’s not who he was.”

The appeal in the federal case has not yet been filed.

The state court’s verdict is the latest development in a saga reaching back to 2006, when a report by the Forward drew attention to working conditions at the Postville plant. The controversy surrounding the Postville plant spurred an intense, and often contentious, Jewish communal debate over ethical standards in kosher meat production. In May of 2008, federal immigration authorities mounted a massive raid in which more than 300 people were arrested, drawing national attention to Postville.

Rubashkin was found guilty in 2009 of bank fraud in federal court. Charges against Rubashkin related to the employment of illegal immigrants at the plant were later dropped by federal prosecutors.

The recent state trial stemmed from an investigation of the plant by the Iowa Division of Labor that was launched before the immigration raid. Rubashkin was eventually tried on 67 misdemeanor child labor charges regarding 26 minors, all illegal immigrants from Mexico and Guatemala and formerly employed by Agriprocessors.

The jury’s foreman, a member of the city council in Waterloo, Iowa, where the trial was held, told the Forward that he believed that the workers had been underage when employed by Agriprocessors, but that Rubashkin himself had been unaware of their age.

“We didn’t see any direct connection that the defendant actually had a conversation about there actually being minors in the plant, and if there was conversation it showed that they were immediately being fired,” said the foreman, Quentin Hart.

The chief prosecutor on the case, an Iowa deputy attorney general, Thomas Henry Miller, said that the state’s contention had been that Rubashkin knew of the violations of child labor law. According to state law, Miller said, one cannot claim ignorance of something if a reasonable person would have inquired into it.

“We felt it was unreasonable for the CEO of a slaughterhouse, who received accusations of child labor from senior employees, supervisors, from the Iowa [Division of Labor], and directly from his own eyes when walking the plant — given all three sources of very obvious notice to him that he had children working in his plant… under those circumstances it was not reasonable for anyone in his position not to inquire as to the fact of the matter,” Miller said.

But Hart pointed to defense testimony that sought to establish the difficulty of determining the ages of the minors, referring to testimony by an immigration official who had been unable to identify minors in a series of photographs of people arrested during the federal raid of the plant. Hart called that line of argument “very, very critical to the case.”

Miller disagreed that the ages of the minors were inscrutable. “We flatly reject the notion that was repeatedly urged to this jury, that white adults should not be expected to judge the age of brown children,” Miller said.

F. Montgomery Brown, who represented Rubashkin in the trial, said that he “never used the word ‘brown children.’” But he said that he did argue that the ages of the workers were impossible to establish simply by looking at them.

“We certainly did make the argument that large numbers of Latino workers essentially was a curtain,” Brown said. “Their ethnicity was a factor in helping them infiltrate the plant.” 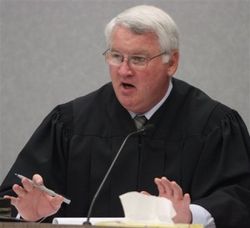 Miller said that Judge Nathan Callahan had barred his team from arguing that Rubashkin’s employment of illegal immigrants made him necessarily culpable for the hiring of minors.

“Our intention was to present that evidence and point out that when the only evidence of age is the date of birth on a document that you reasonably know to be a forgery that you are at least willfully blind as to the age of your workforce,” Miller said.

Miller added that he was not criticizing the judge, but that the ruling had damaged the state’s case.

Meanwhile, Rubashkin’s defenders called the acquittal a victory. “I don’t believe that Mr. Rubashkin wanted minors in the plant, not only because it was illegal but because it served no financial benefit,” Brown said. “And I believe that the verdict does reflect some form of vindication that he didn’t intentionally want minors in his father’s plant.”

Lewin said that the acquittal could have an impact on Rubashkin’s sentencing in the bank fraud case, which is scheduled for June 22. “She’s allowed to consider not only the case that’s before her but any and all other allegations and issues that may have been raised, proven or unproven,” Lewin said of the judge in that case, Linda Reade.

Rubashkin’s defenders have argued that federal prosecutors are seeking a sentence that is disproportionate to the crime of which he was convicted. Six former U.S. attorneys general had signed onto a letter harshly criticizing federal prosecutors’ initial request that Rubashkin be sentenced to life in prison. Since then, prosecutors have revised their request downward and are currently seeking a 25-year sentence, a penalty that Rubashkin’s defenders say is still unfair.

Another point made by the jury foreman on Monday was that there was no clear chain of command between the HR people who did the hiring and Sholom Rubashkin. That supposed lack was created by defense witnesses who testified that HR reported to Heshy Rubashkin, not Sholom.

Rubashkin got off because of that, because the judge would not let hundreds of federal no match letters (showing that workers had presented fake green cards and IDs to Agriprocessors) be entered into evidence, and because the defense was allowed to use a racist ploy by claiming in effect that all little brown Latinos look alike, and that all bearded Jews look alike.

None of this should make Rubashkin supporters proud or cause them to feel vindicated.

How Rubashkin Beat The Rap

Iowa's Deputy Attorney General said that Judge Nathan Callahan had barred his team from arguing that Rubashkin’s employment of illegal immigrants made him necessarily culpable for the hiring of minors. “Our intention was to present that evidence and point out that when the only evidence of age is the date of birth on a document that you reasonably know to be a forgery that you are at least willfully blind as to the age of your workforce.”