Rabbi Yitzchak Tuvia Weiss, leader of the Edah HaChareidis, led mass prayers, including curses directed at the developers of a hotel in the Andromeda luxury housing development near the seafront in central Jaffa. Haredim called police "Nazis" and "murderers," while one black officer suffered racist taunts.

By Yaniv Kubovich • Ha'aretz and The Associated Press 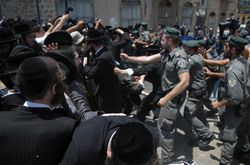 Hundreds of ultra-Orthodox Jews rioted in Jaffa on Wednesday over building work they say is desecrating Jewish graves.

Rabbi Tuvia Weiss, leader of the Edah HaChareidis, an extremist Jewish sect that rejects the authority of the State of Israel, led mass prayers, including curses directed at the developers of a hotel in the Andromeda luxury housing development near the seafront in central Jaffa.

"The Rabbi put a curse on the health, body and the livelihood of anyone talking part in this project and desecrating the memory of the dead," one protester said.

Last month Haredi Jews staged demonstrated at an Ashkelon hospital over building on ancient graves - which archaeologists later said were Byzantine, not Jewish as protesters claimed.

Jerusalem has also witnessed a series of disturbances in the past year over the municipality's plans to open a car park on Saturdays, the Jewish sabbath. 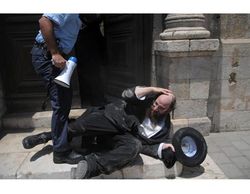 Violent haredi riots in Jaffa. Five police officers and two news photographers were lightly to moderately injured on Wednesday by stones thrown at them by ultra-Orthodox rioters. The police officers were evacuated for medical treatment.

Large forces were deployed to the area in order to contain the demonstrators, of whom 15 were arrested. Helicopters hovered overhead and roads were blocked off.

Hundreds of haredim have been gathering to protest against excavation works in the town's Andromeda Hill on a daily basis in recent weeks. Wednesday morning was no different, and hundreds arrived at the construction site and called out against the workers there. 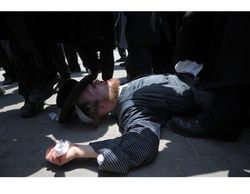 The police were prepared for a demonstration, but the haredi protest escalated when hundreds arrived in buses and began to riot, and climb the fence in the area to tear it down.

They also hurled stones and bricks at the police officers in an attempt to deter them.

As a result of the disturbances, five police officers were injured and treated by MDA crews. Many police, horsemen and Border Guards were deployed in the area and part of Yeffet Street was closed to traffic.

Even after the first disturbances, hundreds of protestors remained carrying signs reading, "Criminals, thieves, get your hands off the graves."

Ambulances followed patrol cars on the streets. Tumbled barriers, stones, bricks and bottles lay strewn around like a battlefield. Haredim continued to gather even after being removed from the work site.

It took hours for the police to disperse the protesters and send them back to the buses. Some threw bottles at the police from the bus windows.

Posted at 11:34 AM in Crime, Litigation, etc., Haredim, Israel | Permalink

Rabbi Yitzchak Tuvia Weiss, leader of the Edah HaChareidis, led mass prayers, including curses directed at the developers of a hotel in the Andromeda luxury housing development near the seafront in central Jaffa. Haredim called police "Nazis" and "murderers," while one black officer suffered racist taunts.
Failed messiah was established and run in 2004 by Mr. Shmarya (Scott)Rosenberg. The site was acquired by Diversified Holdings, Feb 2016.