According to the complaint filed by the Iowa AG’s Office, Runge and her colleagues are accused of inflating production costs and falsifying reports in an effort to claim tax credits, which were then sold. 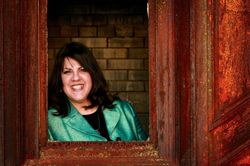 A former Omaha woman used that phrase in an essay she wrote for the Jewish Press. In it, Wendy Weiner Runge told the story of returning to the region to act as executive producer on a film titled “The Scientist.” She credited tax incentives offered by the State of Iowa, calling it a “field of dreams.”

Now, the situation is more of a nightmare.

The State of Iowa has accused Runge, 45, of exploiting the tax credit program. She faces 12 felony charges: one count of ongoing criminal conduct and 11 counts of fraudulent practice.

The complaint alleges inflated charges such as $225 to rent a push broom.

A related count of felony theft was filed against Runge in February.

Calls to Runge, who lives in Minnesota, and her attorney were not immediately returned Friday.

The charges follow a nearly yearlong scandal that has resulted in a charge of official misconduct for Tom Wheeler, former manager of the Iowa Film Office, as well as the firing of five employees of the Iowa Department of Economic Development, which oversaw the Film Office. The tax credit program has been halted.

According to the complaint filed by the Iowa Attorney General’s Office, Runge and her colleagues are accused of inflating production costs and falsifying reports in an effort to claim tax credits, which were then sold.

Selling the tax credits was legal. The tax credit program allowed filmmakers to obtain tax credits equal to half the money spent on the film in Iowa. They could then sell them to another Iowa taxpayer or use them for their own taxes.

But Runge, Saunders and LeBeau are accused of submitting false reports in order to obtain more money from the state.

According to the complaint, the budget for “The Scientist,” which was filmed in the Council Bluffs and Omaha area, was originally set at $767,250. That budget was later amended to about $1.8 million. The final invoice of $2.5 million included items that were far beyond market value, according to investigators.

The Legislature imposed an annual cap on tax credits allowed under the program in 2009. A month before the cap was to go into effect, investigators allege, Runge, Saunders and LeBeau submitted 15 additional applications for film tax credits. Some of the films didn’t even have scripts. The total budgets for the 15 applications were more than $133 million and could have netted $57 million in tax credits. According to the complaint, nine of those applications contained false information.

I know Wendy and her husband casually. I don't have any knowledge of any prior criminal activity, and I didn't know anything about this case, other than the firings of the state officials overseeing the program – all of whom, I believe, are non-Jews.

It's a bit early in the game to be crying anitsemitism. It's early to be moving the Rosh Hashana date. As for the Rubashkin question, she may have been asked because several people who allegedly fixed kosher meat prices and colluded with Sholom Rubashkin are prominent members (or, in one sad case, was a prominent member) of the synagogue Runge and her husband belong to.

That synagogue's former rabbi, Moshe Tuvia Lieff, is a big Rubashkin backer, and so are many synagogue members – most of whom know Rubashkin from the years he lived in the Twin Cities, which has a small Orthodox / haredi community.

And the people who created a fake OSHA report in an attempt to clear Agriprocessors' and Rubashkin's names are from that community.

I hope Runge is innocent. If not, I hope she has the sense to plead guilty and throw herself on the mercy of the court in the hope that dramatically cuts her prison time.

If you had asked me last week to draw up a list of actual or potential criminals in the Twin Cities Orthodox / haredi community, Wendy Runge would not have been on the list. Lets hope I would have been correct and not simply naîve.

According to the complaint filed by the Iowa AG’s Office, Runge and her colleagues are accused of inflating production costs and falsifying reports in an effort to claim tax credits, which were then sold.
Failed messiah was established and run in 2004 by Mr. Shmarya (Scott)Rosenberg. The site was acquired by Diversified Holdings, Feb 2016.