He's a great leader in the Jewish community, he's just not very good at marriage. 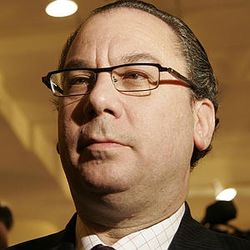 Respected Rabbi Marc Schneier has split from his fourth wife and is now spending time with a younger woman.

A source tells us the rabbi and wife Tobi Rubinstein-Schneier are divorcing after splitting a few months ago, and he has since started spending time with an attractive brunette in her 30s named Gitty.

Schneier, founding rabbi of the New York Synagogue and the Hampton Synagogue in Westhampton, is also a spiritual adviser to stars including Russell Simmons and Steven Spielberg. He and Tobi have been married for three years.

Schneier, 51, is also the founder and president of the Foundation for Ethnic Understanding. He often jets around the world to improve interfaith relations and met with Pope Benedict at the Vatican last year.

Schneier, named by Newsweek as one of the 50 most influential American rabbis, recently told his congregation that he's suffering from bipolar disorder.

A source told us: "He's divorcing his fourth wife. He's a great leader in the Jewish community, he's just not very good at marriage.

"He met Gitty after he was separated from Tobi and they are spending time together."

Schneier and his wife have homes in Westhampton Beach and Manhattan. Tobi famously arranged for a 400-pound endangered Asian lion called "Rabbi Marc" to be donated to the Jerusalem Biblical Zoo in Schneier's honor for his 50th birthday.

A spokesman for Rabbi Schneier, Ken Sunshine, said: "Marc Schneier is a renowned worldwide leader, and a pioneer in Muslim-Jewish relations. He has been dealing with a very serious illness, and we will have no comment on rumor or innuendo."

Calls to lawyers for Rubinstein-Schneier were not returned.

He's a great leader in the Jewish community, he's just not very good at marriage.