Chabad accused by secular residents of targeting children, calls secular protests "the biggest compliment testifying to the success of the (Chabad) activities." 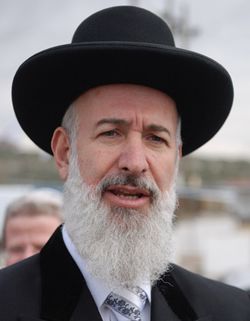 Chief Rabbi Yona Metzger expressed his support for Chabad's activities in Ramat Aviv and criticized the methods used against the group by the Tel Aviv neighborhood's secular campaign.

During a speech at Chabad's annual leadership conference on Thursday, Metzger, himself a resident of north Tel Aviv, complimented the organization's activists, saying that the highly publicized conflict in Ramat Aviv is "the biggest compliment testifying to the success of the (Chabad) activities."

The chief rabbi also revealed at the event that a secular businessman living in the neighborhood told him that he started receiving threats from his neighbors asserting that should he fail to cut off his support for the local Chabad House, they would damage his income, and even detailed how they intended to do so in an email sent to him.

According to Metzger, "In Ramat Aviv, there is a fear of becoming religious… This instance is proof of the inadequacy of those making the threats."

The conference of the Hasidei Chabad, led by Rabbi Yossef Yitzhak Aharonov was held at The Avenue in the Airport City. It was attended by Tel Aviv's Chief Rabbi Meir Lau and Knesset members Avi Dichter, Ofir Akonis, Zevulun Orlev, and Othniel Schneller. Many businessmen and professionals also attended the conference and gave tips and tools for proper management practices.

The primary issue for these secular Israelis has always been Chabad targeting their little children. Chabad sends its missionarues to the park where they distribute candy to secular children if they recite pesukim (Biblical verses) chosen by Chabad's late rebbe.

Israel's Ashkenazic Chief Rabbi sees nothing wrong in this.

I think Rabbi Metzger's attitude would dramatically change if secular Israelis went to parks and gave candy to haredi children who properly identified dinosaurs or who could recite the stages of Evolution.

Chabad accused by secular residents of targeting children, calls secular protests "the biggest compliment testifying to the success of the (Chabad) activities."
Failed messiah was established and run in 2004 by Mr. Shmarya (Scott)Rosenberg. The site was acquired by Diversified Holdings, Feb 2016.