Last week, Michael Steinhardt, one of the biggest philanthropists the American Jewish community has and the primary financial supporter of Birthright Israel and Birthright Israel / Next, Birthright's followup organization, published an op ed in several venues, including the New York Jewish Week. In it, Steinhardt claimed with regard to Birthright Next's New York City-area office:

…For some time now, journalists, bloggers, Jewish communal leaders and others have attempted to paint our activities as “controversial,” “Orthodox” and disconnected from the rest of Jewish communal life. None of these characterizations describe our programming or our vision, and they are disturbingly offered by those without any knowledge of our work. Rabbis and writers alike lament the state of programs they have never attended. These views lack the credibility they have been given in some Jewish circles and the space on the page they have been offered by some Jewish publications. I challenge all those who accuse our work of being “religious” or “Orthodox” in nature to attend an event before defining it. …

Steinhardt says Birthright Next's activities are not Orthodox. Further, he says those who criticize Birthright Next NYC do so out of ignorance or, perhaps, malice.

The media Steinhardt is referring to is primarily the Forward and Failedmessiah.com.

Last year, the Forward found that Birthright Next NYC's primary vendor, the Jewish Enrichment Center, was closely connected to haredi kiruv organization Ohr Somayach. FailedMessiah.com furthered that story by proving that the JEC was, in fact, an arm of Ohr Somayach itself.

…The Jewish Enrichment Center, which some people characterize as a kiruv, or Orthodox outreach organization, has been given a virtual monopoly on reaching out to the tens of thousands of Birthright alumni who return to the New York Tri-State area. This large pool of young adults represents one third of all those who have gone on Birthright trips, a majority of whom are non-Orthodox Jews.

The center is the official New York partner of Birthright Israel NEXT, an arm of Taglit-Birthright established three years ago to fulfill the critical job of follow up. This new effort provides funds to more than two dozen Hillel houses, local Jewish federations and not-for-profits nationwide to encourage alumni engagement in Jewish life. But the Jewish Enrichment Center receives more than all these other beneficiaries combined.

The group was given $1.4 million last year, according to Birthright Israel NEXT’s executive director, Rabbi Daniel Brenner. In 2007, the last year for which the Forward was able to attain tax returns, the JEC received $1.87 million. By contrast, that year, Hillel: The Foundation for Jewish Campus Life was granted a total of $547,516 for programming nationwide.…

In other words, the JEC received three times the funds the rest of the country did combined, and that money went to an organization directly tied to Ohr Somayach.

As the Forward noted after FailedMessiah.com's report:

As the Forward reported on September 4, the JEC which has received nearly $5 million from philanthropist Michael Steinhardt since 2005, has a virtual monopoly on reaching Birthright alumni in New York and is run by Orthodox rabbis involved in kiruv, or religious outreach. What has only now become clear is the JEC’S connection to Ohr Somayach, which engages openly in a form of Jewish evangelism.

Ohr Somayach claimed the JEC as a branch: 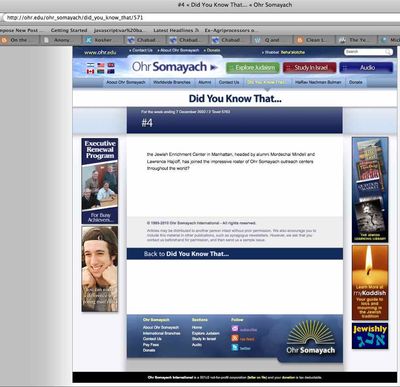 "Did you know that…the Jewish Enrichment Center in Manhattan, headed by alumni Mordechai Mindell and Lawrence Hajioff, has joined the impressive roster of Ohr Somayach outreach centers throughout the world?"

Birthright Next NYC's head is Rebbeca Sugar, who has been a close friend of Steinhardt's family since childhood.

Last year, Steinhardt refused to deal with the facts presented, and he does the same now..

Birthright Next and the participants it serves deserve better.

The excuse for over-funding the JEC is that secular and non-Orthodox groups are not as good at outreach and retention as the JEC is.

That is probably true. But, in the case of secular groups, that truth has an easily remedied cause: lack of funds.

You can't run programs and attract participants without money.

Give secular groups which focus on secular Jewish culture as much money as the JEC gets and you'll see results that will meet (and probably surpass) the JEC's.

Why not try it, Michael? It would support the pluralism you endorse, and it could very well double Birthright Next's retention statistics.

Posted at 05:20 AM in Haredim, Outreach | Permalink