« Israel Nature Guides Thought To Be Hiding Facts To Appease Haredim | Main | Where Were You On Christmas? »

Chabad Rabbi Leads List Of 50 Most Influential Rabbis In America

Yehuda Krinsky is ranked number one. But the Newsweek list has a far bigger surprise than that.

Yudel Krinsky is number one according to Newsweek because:

As the leader of the Chabad-Lubavitch movement, Krinsky is the contemporary face of the Hasidic branch.

Note there is nothing Krinsky has done that is mentioned as special, wise or unusual.

What this really means is that Krinsky is number one because in Newsweek's estimation, Chabad is now the most important branch of Judaism in America. He isn't special; Chabad is.

Rabbi Morris Allen also made the list this year, showing up at number ten:

Morris Allen—As program director for Magen Tzedek, the ethical kosher seal, Allen is changing the way the world thinks about kashrut and the ethical issues surrounding the hechsher.

But the big news is number thirty-six, Sara Hurwitz:

Sara Hurwitz—Hurwitz rose to national attention when Rabbi Avi Weiss (No. 18) bestowed her with the title of “rabba.” She is considered the first Orthodox woman rabbi ordained in the United States, and in this role she has had an impact on the roles considered acceptable for modern Orthodox women. 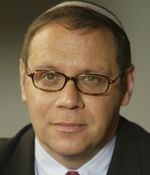 Closing out the list at number fifty is JSafe's Rabbi Mark Dratch:

Mark Dratch—As founder of JSafe (The Jewish Institute Supporting an Abuse-Free Environment), Dratch is a nationally recognized speaker and consultant in matters of domestic violence, child abuse, and professional abuse within the Jewish community.

Chabad Rabbi Leads List Of 50 Most Influential Rabbis In America

Yehuda Krinsky is ranked number one. But the Newsweek list has a far bigger surprise than that.
Failed messiah was established and run in 2004 by Mr. Shmarya (Scott)Rosenberg. The site was acquired by Diversified Holdings, Feb 2016.