At Least 110,000 Haredim Protest Against Supreme Court And State

Demonstrations held in Jerusalem, Bnei Brak, and in other areas of the country. Haredi rabbinic leaders join protests. Court called "fascist." "God will rule forever and ever." Parent's jail delayed at request of police until protests end. 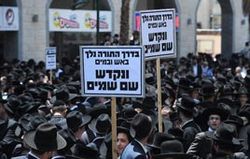 More than 50,000 ultra-Orthodox people gathered in the central city of Bnei Brak on Thursday afternoon to protest a High Court ruling against the discrimination between Ashkenazi and Sephardic girls at the Beit Yaakov school in Emmanuel.

Some of the parents ordered to be detained by the court were present at the rally, and were carried on the shoulders of some of the participants with dance and song. They then boarded a bus to the Jerusalem police station where they are to be detained.

Their bus's progress was blocked by protestors standing on the main road leading out of the city, but police special forces cleared them off.

At the same time, more than 60,000 protestors flocked to Jerusalem's Yirmiyahu Street along with signs reading, "High Court against the people" and "God will rule for all eternity".

Other Emmanuel parents who took part in the rally held in their honor in Jerusalem also boarded a bus to the station. The protestors carried the parents on their shoulders to the bus, and began to follow them to the station.

Massive police forces were deployed across the country to prevent clashes. "More than 10,000 policemen and Border Guard officers will deploy on the main routes and especially at the main places of protest," said Commander Nissim More, head of the operations division at the police's national headquarters.

The Bnei Brak rally was stopped for a few minutes after several protestors fainted. Other protestors took advantage of the break to sing and dance. In Jerusalem, paramedics treated eight for dehydration and fainting.

The Jerusalem protestors appeared to be enraged with Supreme Court Justice Edmond Levy, who ruled that the Ashkenazi parents who refused to send their girls to school should be sent to jail.

"Edmond Levy is the biggest racist in history. This is what happened in the (former Shas Minister Shlomo) Benizri case as well. Where else in the world have you seen such a precedent – adding to the sentence after an appeal? There is a clear trend against us because of our black skullcap," said Amram, one of the protestors.

Shmuel Naimi is one of the parents slated to be imprisoned. His son Shimon, 20, told Ynet that "there is no racism in Emmanuel. The education is better, 30% of the students are Sephardic and there is no such thing as separating between Ashkenazim and Sephardim. It's an argument created because of the crazy media."

He also expressed his anger at the Supreme Court judge. "I have 10 brothers and sisters and I have no idea what the little ones are going to do. Perhaps Edmond Levy could find them a babysitter."

Netanel, a Ger Hasid, arrived to support the Slonim Hasidic dynasty in its battle. "It begins with Slonim and it will reach all of us. I am here to make sure it won't reach Ger," he said.

"Who is Edmond Levy to tell me what to do? No one has the right to tell me how to educate my children. The idea that the High Court would intervene is a crime. Any haredi would be willing to go to jail."

Ronen Medzini contributed to this report.

Tens of thousands of ultra-Orthodox rally in Israel over segregated education ruling
Leading modern Orthodox rabbi urges religious Zionists not to support 'racism' of Ashkenazi parents who refused to let their daughters study with Mizrahi girls.
By Yair Ettinger • Ynet

Tens of thousands of ultra-Orthodox protesters gathered in Jerusalem and in Bnei Brak on Thursday to support the right of Ashkenazi Hasidic parents to keep their children in classes segregated from their Mizrahi peers.

Ultra-Orthodox officials made a last-ditch effort on Wednesday to keep parents in the settlement of Immanuel from being arrested and jailed for refusing to implement a High Court of Justice ruling requiring the Ashkenazi and Mizrahi girls to study in the same classes.

The parents were ordered to arrive at the Jerusalem police headquarters at 1 P.M. on Thursday to begin carrying out their prison terms. The parents did not fulfill that order, however, and police have asked the court to legally delay the sentencing until 5 P.M.

The court had initially scheduled the sentencing to begin at 12 P.M., but postponed the commencement due to the mass protests expected in the city.

The 43 families of the Ashkenazi girls seemed elated Wednesday by the prospect of their impending arrest and two-week jail term, which some called "a historic stand for the sanctification of the name of heaven."

The police have given a permit for a 20,000-strong demonstration in Jerusalem, to be led by Ashkenazi Haredi political and religious leaders. Thousands more gathered in the ultra-Orthodox neighborhood of Bnei Brak, near Tel Aviv.

The numbers could far exceed the expected figure, though, to judge by the calls issued by heads of yeshivas and schools to cancel classes Thursday so students can attend the protest.

A leading spokesman of Israel's modern Orthodox stream on Thursday urged religious Zionists not to take part in the mass protests, regardless of the political price they may pay in the future for refusing to support the movement.

"I cannot take part in the racism and discrimination that is taking place, which is just the tip of the iceberg," said Rabbi Yuval Sherlo, who heads the joint army-yeshiva program in Petah Tikva.

Religious Zionism must "return to its historic role" and bring both sides to a compromise. "It's impossible to claim that this is Jewish law or that it is sanctifying the name of God," he said.

Even the spiritual leader of the Sephardi ultra-Orthodox Shas party, Rabbi Ovadia Yosef, has come out against the petitioners seeking integration. He said they should not have taken the matter to the courts.

Attempts to find a compromise were orchestrated Wednesday by former Shas chairman Aryeh Deri, who met in Jerusalem with the most prominent leader of the Ashkenazi community in the northern West Bank settlement of Immanuel - the Slonim grand rabbi, Shmuel Berezovsky.

Deri is focusing his efforts on assuring compliance with the 2009 High Court ruling requiring the ultra-Orthodox Beit Yaakov school in Immanuel to make sure the Mizrahi students study with their Ashkenazi peers. Most of the students are Ashkenazi.

The Ashkenazim have said they are not guilty of ethnic discrimination but are attempting to keep the Ashkenazi students from being influenced by those they consider to be less religious.

Some have been discussing the possibility of building another school in Immanuel for next year - the fourth for Haredi elementary-age girls - that would give parents the autonomy to decide who should study with whom. The High Court petitioners, chief among them Yoav Laloum, said they did not oppose the opening of another school, but the compromise has not really been embraced by all the parties involved.

The State Prosecutor's Office might seek the arrest of only one parent rather than the whole group.

But even as politicians held talks in an effort to resolve the issue quietly, many Haredim were gearing up for the demonstration. On Wednesday, the Slonim beit midrash was full of people holding feverish conversations about Jews who died for the sanctification of God's name, mixed with stories from the High Court.

The protest in Bnei Brak began at 1 P.M., where a representative of the parents from Immanuel addressed the crowd. The main march began an hour later in Jerusalem, heading to the police headquarters in the Russian Compound. Dozens of the pro-segregation parents were to stand on the pedestrian bridge over Jerusalem's Bar Ilan Street wearing signs saying "prisoner sanctifying the name of heaven."

Ads appeared in newspapers on Thursday will call on people to avoid violence. Yerah Tocker, a spokesman for the protest, said "avoiding violence is one of the main emphases of the organizers."

"We want to protest the High Court ruling and declare that for all of us, in light of the ruling, Torah comes first," he said.

Despite the pledges of non-violence, police are to deploy in large numbers in Jerusalem, Bnei Brak, Beit Shemesh, Immanuel and near Ma'asiyahu Prison, where apparently the fathers of the girls are to be taken, and Neveh Tirza Prison, where the mothers are to go.

Police also called on drivers to avoid the area of the demonstrations in Jerusalem on Yermiyahu, Bar Ilan, Shmuel Hanavi and Hanevi'im streets, and in the Russian Compound.

The Courts Administration on Wednesday beefed up security around Supreme Court Justice Edmond Levy, who headed the panel that ruled against the segregation. Levy, who wrote the sole dissent from the anti-segregation ruling, came out strongly against parents seeking rabbinic advice on the ruling. "No ruling of a court in general, or the High Court in particular, requires the authorization of any person, not even halakhic (Jewish law ) authority," Levy said.

Wednesday for the first time since the segregation issue in Immanuel became public three years ago, Yosef said he was "very shocked" at the petition.

Shas chairman Eli Yishai met on Wednesday with Yosef, after which he said Yosef was "pained at the discrimination and also at turning to the courts and the High Court ruling." He said it would have been better to deal with the issue "in pleasant ways" and insist on a solution out of court. Shas has not told its followers whether to take part in the demonstrations. However, this evening the Shas Council of Torah Sages is to hold a special meeting on the issue and will set its official position.

Rabbi Shimon Ba'adani is the spiritual leader of the Yemenite Jewish community in Immanuel, and all his daughters study in the Hasidic classes with mostly Ashkenazi girls.

The Shas position is very complex and not likely to win it many supporters in its community. One of the main reasons Shas has not expressed itself yet on the matter is because the elite Shas families, including the Yosef and Yishai families, send their girls to Ashkenazi schools.

Deri, a former Shas chairman, has been waiting a long time for the right moment to re-enter politics after serving time on corruption charges. On Wednesday he showed signs of moving in that direction. He told Haaretz the political system had to make decisions in the Immanuel affair and not let the courts intervene.

"The handwriting is on the wall. A terrible rift among the people," Deri said. "There are ministers and deputy ministers. They should get together and go to the prime minister's office and say, 'Let's solve the problem.'"

The Ashkenazi community is united in its support for the demonstration. Rabbi [Yosef Shalom] Elyashiv announced he was personally going to join the demonstration, as did the Gerer rebbe and other leading rabbis.

At Least 110,000 Haredim Protest Against Supreme Court And State

Demonstrations held in Jerusalem, Bnei Brak, and in other areas of the country. Haredi rabbinic leaders join protests. Court called "fascist." "God will rule forever and ever." Parent's jail delayed at request of police until protests end.