There was a brief period of a few years, not much time in the city’s long history, in which everyone sang and told stories about Jerusalem. 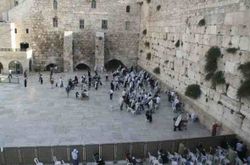 Forty-three years ago, a group of reservist paratroopers stood in front of the Western Wall. Bulldozers that were mobilized overnight demolished the Mughrabi neighborhood and turned the area into a huge parade ground, the Western Wall plaza. The first civilians, well-connected ones, came to the plaza. Some prayed, some took pictures, others looked for spoils. The first thought that came to my mind was that Jerusalem would now be a real capital, a large and important capital, but it would be the capital of a different country, someone else’s capital.

There was a brief period of a few years, not much time in the city’s long history, in which everyone sang and told stories about Jerusalem. Naomi Shemer, Shuli Natan, Meir Ariel, Yehoram Gaon, the military bands. Yossi Banai and Dan Ben-Amotz spread the wisdom of Suramello. Jerusalem was not only sacred and patriotic. It was also cool. And colorful. And fascinating. It was enough to sit for one morning on the balcony of the redhead’s café, near Jaffa Gate, drink a cup of sweet Turkish coffee, watch the crowd thronging to and from the Old City, and inhale the cosmopolitan odor. Franciscan monks, Copts, Ethiopians and Armenians, ultra-Orthodox Jews, Palestinian villagers carrying their baskets on their heads, soldiers with guns, pilgrims with crosses, backpackers looking for cheap guest houses filled with hashish, Israeli hummus lovers, tourists from all over the world.

All these are still there, except for the redhead, who has closed up shop. But the charm that captivated everyone in 1967, the year of Jerusalem’s discovery, no longer appeals to everyone. Alienation has arisen in certain sectors, and hatred on the sidelines. People don’t like the large number of demonstrations, the many extremists, their violence, the street that has been handed over to the various lunatics, the addiction to politics. Jerusalem is a city from which the Israelis migrate.

The occupation of 1967 has given way to an occupation that is no less significant, the demographic occupation. According to municipality statistics, 191,000 pupils study in education institutions in Jerusalem. Of these, 130,000 study in either ultra-Orthodox or Arab institutions. This means that an overwhelming majority of children in the city are educated in anti-Zionist schools. Since in Ashkenazi ultra-Orthodox education institutions the main language is Yiddish, and in schools in East Jerusalem it is Arabic, one might say that Hebrew is in the minority in Israel’s capital.

The outcome is that the city is less diverse, less interesting. In recent years, a certain division of labor has been created between Jerusalem and Tel Aviv. Jerusalem is becoming increasingly ultra-Orthodox and poor, whereas Tel Aviv is becoming increasingly secular and old. Jerusalem is turning black. Tel Aviv is turning white. The seclusion in demographic ghettoes is reducing the attractiveness of both cities.

Some of these processes are unavoidable. Some are human-made. The Israeli governments, for example. They speak loftily about Jerusalem, but until today they have not truly recognized the city as Israel’s capital. The rule is that the more right wing the government, the more it neglects Jerusalem’s status.

It starts with small things. Ostensibly, the Israeli government sits in Jerusalem. All the government ministries are located in the capital. Only two ministries—defense and agriculture—were permitted to be located outside the capital: The Defense Ministry in the Kirya in Tel Aviv due to the proximity of the IDF General Staff, and the Agriculture Ministry, on a whim, in Beit Dagan. In practice, the Regional Development Ministry is also located in Tel Aviv, as is the Negev and Galilee Development Ministry, and Minister Braverman’s ministry. Most of the ministers have bureaus in Tel Aviv, in explicit contradiction of the government’s resolution (the only minister who is permitted to hold a bureau in Tel Aviv is the prime minister).

Since the minister and his bureau shuttle between the two cities, the director general also shuttles. Meetings are set in Tel Aviv, because it is more convenient. The senior officials live in the coastal plain. As far as they are concerned, Jerusalem starts and ends in the government compound, at the entrance to the city. The government compound is like a façade, scenery behind which there is nothing. When they are occasionally forced to enter the city, they get lost.

There is no government in the world that divides its ministries between two cities that are 60 kilometers apart. There is a great waste of money here, but never mind the money. There is a great debasement here of the idea of state responsibility, and educational damage.

With the exception of a number of Latin American states, the world does not formally recognize Israel’s sovereignty over West Jerusalem. Not East Jerusalem, but West Jerusalem. From the standpoint of the diplomatic corps, the eternal capital of Israel is Herzliya Pituah. Most of the diplomats live there. The Israeli governments over the generations have give up the battle for recognition of the city. They thought that there were more important battles.

They may have been right. What is much more annoying is that so little has been done to influence the demographic erosion. Jerusalem enjoyed the benefit of the Russian immigration much less than other cities. Not enough has been done to open industrial plants and create jobs. The Hebrew University has lost its senior position and become just another university in the eyes of the government, another college.

It is not that the government has discriminated against Jerusalem. It simply gave up on Jerusalem.

In the name of normalcy

Two hundred and fifty settler families live in the heart of Muslim neighborhoods in Jerusalem. The NPO backing them, Ateret Cohanim, sets the policy, and prime ministers and mayors obey, some willingly, some involuntarily. Matti Dan, the NPO’s director, recently took me on a tour of its outposts. Among other places, we visited Beit Yehonatan, a tall building built unlawfully in the Silwan neighborhood. The court instructed that the building be sealed off. The NPO went to the court and proved that at least 250 Palestinian houses were built the same way. If they are sealing off the Jewish building, let them demolish the Arab buildings.

A the same time, dozens of Palestinian families are entering empty apartments in Jewish neighborhoods in East Jerusalem. Since there is demand, there is a supply. There is no security, no politics. It all works according to market laws.

The van that leaves Beit Yehonatan is filled with babies and their mothers. On the floor lies a leaflet calling to participate in the vote at the Likud Central Committee. The babies cry. That evening, the van was attacked by stone throwers.

Over 250,000 Palestinians live in Jerusalem, one third of the city’s population. The number is so high because prior to the annexation of East Jerusalem, two generals, Rehavam Ze’evi and Shlomo Lahat, drew up municipal borders that brought into the city Arab neighborhoods and villages that were never before included in Jerusalem.

Ostensibly, they enjoy the best of all worlds. Their children study on the basis of either Palestinian or Jordanian curricula, with Israeli funding. They have national insurance and health insurance and access to the Israeli job market, and the West Bank is open to them. They found an original way to express their happiness: In the Palestinian Authority elections, most of them voted for Hamas.

Every Friday, about 100 of them come to the Sheikh Jarrah neighborhood, to demonstrate against the Jewish neighborhood established there on old Jewish property, while expelling Palestinian families that lived in the neighborhood since the Jordanian occupation. The demonstrations elicited great interest in the world media, both because of the blatant discrimination, since Arabs are unable to get back their property from 1948, and also because of the proximity to the American Colony Hotel, where the foreign journalists stay.

Most of the demonstrators—about 200 in number—belong to the Jerusalemite Jewish left wing, with all its variants. Zionist, post-Zionist, anti-Zionist. The Arabs file in from the nearby Wadi Joz neighborhood. The Jews drive in from West Jerusalem. The Arabs carry signs in Arabic, Hebrew and English. The dominant sign is “Jerusalem will not be Hebron.” At first glance, the sign is odd: Why are Arabs opposed to turning Jerusalem into Hebron? After all, Hebron is Arab. But one has to understand the code: When it says “Jerusalem,” this refers to East Jerusalem; when it says Hebron, it refers to the Jewish enclave in Hebron.

But let us set aside Jerusalem’s troubles. Despite everything, it has a great deal to offer, both to its own residents and to outside visitors. First of all, it is not Tel Aviv. It is less pretentious, less ostentatious. Take the young Jerusalemites who have migrated to Tel Aviv: They are less enslaved to the brand name culture, less pompous. Most of them served in the army. Like young people who comes from kibbutzim, they prefer to meet in the Tel Aviv exile with each other, in the same clubs, in the same pubs.

Secondly, there is no lovelier city for foot walks. Thirdly, it has beautiful sunsets, particularly on clear days. For an hour, a soft blue light falls on the city, filled with grandeur. Fourthly, one can breathe in the city even in the summer. This is no small matter, in comparison with Tel Aviv.

There was a brief period of a few years, not much time in the city’s long history, in which everyone sang and told stories about Jerusalem.
Failed messiah was established and run in 2004 by Mr. Shmarya (Scott)Rosenberg. The site was acquired by Diversified Holdings, Feb 2016.