Earlier today I posted a story about a woman who made aliya, served in the IDF but then left Israel when her non-Orthodox conversion was rejected by Israel's non-Zionist chief rabbinate.
While Jessica Fishman did not convert in Minnesota, she did live most her adolescence and early young adulthood here, attending Beth Jacob Congregation, a Conservative synagogue headed by Hechsher Tzedek / Magen Tzedek's Rabbi Morris Allen.
In response to that article, Rabbi Allen Issued the following statement: 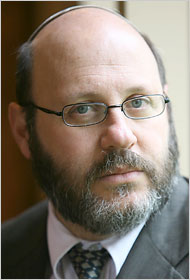 First and foremost, our thoughts and prayers are with Jessica Fishman. She is a wonderful individual whose passion for Israel and the Jewish people has been inspirational. We cheered in our shul when Jessica made aliyah in 2002. When she landed on the tarmac of Ben-Gurion Airport and had her picture taken with the Prime Minister she was radiant. Her beautiful smile made it clear that she understood that she had come “home” --to the home of her people long ago and for generations to come.

I have had the pleasure, as her rabbi, of watching this Zionist passion grow and develop. Having grown up in a home where Judaism and love of Israel were both central, it was not accidental that during her college years her Zionist fervor found expression. On one occasion, when Jessica was a senior at Indiana University, during our annual “college winter break reunion”, she implored her fellow Beth Jacob college students to spend a semester or a year on junior year abroad. After her college graduation, she applied for and was accepted into OTZMA, a Jewish Agency program whose primary goal is to allow recent college graduates an opportunity to experience what living in Israel might indeed be all about. It was after this year-long program that Jessica decided that she was going to make Aliyah and devote herself to the cause of making Israel truly a Jewish homeland. The sadness of this current moment in her life is that a passionate Jew and fervent Zionist has discovered that the country we love and defend has increasingly surrendered its soul to those whose understanding of Judaism and the Jewish people is narrow and filled with misunderstandings and a fear of “Klal Yisrael”.

I know the Fishman’s. They are good Jews and lovely people. I had the pleasure of being their rabbi from the time they moved back to Minnesota from New York in 1989, until they moved to Colorado in 2008. They purposefully moved to Mendota Heights so they could raise their children in our shul community. They bought a home not more than 3 blocks away so they could have the shul serve as a central part of their family’s life.

They sent their children to Jewish schools, provided them with strong Jewish connections throughout their high school years, and encouraged them to participate in USY and Herzl camp. They also modeled what Jewish life was all about. Not only was their home a home where shabbas was shabbas, and where kashrut was observed, they demonstrated that the principle that “all of Israel is responsible one for the other” was a living part of their lives.

Les Fishman was active in shul leadership and served as its President. He was regularly at daily minyan. Susie was actively involved in Hadassah and served as its President and was in shul most every Shabbat. In fact, during the Intifada, when many American Jews refused to travel to Israel, Susie and I together with several other Jews from St. Paul made a solidarity trip to support the people and the State of Israel. Sadly, Susie’s mother died while we were there. And though she immediately boarded a plane and returned for the funeral, her parting words to me at the airport were that she was “truly sad to be leaving her people at this critical moment in time for an equally tragic personal loss.”

I hope that Jessica is able to return to Israel with her dignity as a Jew fully intact and her passion for the Zionist dream no less evident. But in order for that to happen we need to work together to overcome the forces that are pulling the fabric of the Jewish community and the Jewish people apart. The forces of intolerance and the enemies of pluralism must be addressed at every point of contact. We must teach a Judaism where “Simchah shel mitzvah” --the joy of Jewish living-- is evident in all that we do. We must work hard to create a Judaism where service in the Israeli army is valued no less as a sign of one’s commitment to Jewish people than is study in a yeshiva. We must work hard to create a Judaism where kashrut doesn’t devolve into worrying about bugs in broccoli but rather is a means for eating in a manner that brings God’s presence more fully into this world. We must work hard to create a Judaism where Jewish learning is central to every Jewish person’s life, and that learning includes not only the accumulated sacred texts of our tradition but also the poetry of a Bialik, the prose of a Singer and the teachings of a Heschel. Unless we devote ourselves to creating such Judaism, the likelihood of additional tragedies like Jessica’s will only continue to multiply.

For those of us who are vigilant day and night for the security and defense of Israel, we understand that its internal security is no less important. If the forces of the narrow and intolerant continue to flourish inside the State, the long-term security of her borders are even more precarious. Jessica Fishman is an example of the best that American Jewry has produced. As one committed to the sacred work of building a vibrant Judaism and a vital Jewish people, I re-dedicate myself to working to insure that never again will such a beautiful Jewish soul feel the vindictive hand of a Judaism increasingly controlled by narrowness and intolerance. Judaism and the state of Israel are capable of crafting solutions to ambiguously difficult situations. More importantly, what is called for is to recapture the courage of the ancient rabbis, who even on occasion were willing to alter a biblical command in order to allow for Jewish lives to be protected and lived fully(see for example Sanhedrin 26a). We Jews deserve no less and indeed the times call for such courage in fighting for this cause.

Rabbi Morris Allen responds.
Failed messiah was established and run in 2004 by Mr. Shmarya (Scott)Rosenberg. The site was acquired by Diversified Holdings, Feb 2016.