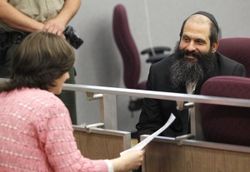 Abner Lopez Azurdia started assembling boxes and weighing meat at the kosher slaughterhouse when he was 15. He did not offer details on how many hours he worked, or if he was around chemicals or dangerous equipment.

Azurdia said he has no legal status in the U.S., but is seeking a U-visa with the assistance of an immigration attorney.

On cross-examination, Azurdia said he saw federal immigration agents scream and call them rats before chaining them together. He said the experience terrified him.

3:30 p.m., Waterloo, Ia. — After the break, Rucal identifies Derrick as her supervisor.

Upon questioning by the defense, she says they knew each other by name.

“Yes, sometimes he’d call me by name,” she said through an interpreter.

“So you knew him?” Weinhardt said.

On re-direct, Assistant Iowa Attorney General Laura Roan asks Rucal if she knows the supervisor’s name. She said she does not know his name.

The next witness, Alvaro Jerez Ravaric, said he started working at Agriprocessors at 16. He cut heads off chickens and processed turkeys, he said.

He said he may be deported after testifying, but an immigration attorney has applied for a one-year work permit on his behalf.

On cross-examination, he said he didn’t think his supervisors knew he was a minor. He was 18 at the time of the immigration raid, and served five months in prison.

He also said he would not have recognized Rubashkin on the street, and said the former plant executive rarely passed through his department at the plant.

2:50 p.m., Waterloo, Ia. — Nilda Nuritza Rucal said she started de-feathering 45 chickens per minute with scissors the same day she applied for work at Agriprocessors. She worked from 7 p.m. to 7 a.m., and made about $300 per week. She was 15.

No one showed her how to do the job, so she said she learned by observation. She worked in a large team that gathered around a table to process the birds.

“At first, it was very difficult. I didn’t know what to do,” she said.

Defense attorney Mark Weinhardt quizzed her about an interview she gave in August 2008 to a state criminal investigator in which she admitted to lying about her identity to gain employment.

But Rucal said she wasn’t trying to fool Agriprocessors.

“They knew what kind of identification I had,” she said.

“Those investigators didn’t do anything to stop you from working at Agriprocessors until the time of the raid?” Weinhardt said.

Rucal replied she didn’t give them her real age until after the May 2008 immigration raid.

Weinhardt then asked about sexual harassment she received from a supervisor, Eduardo Toj.

The attorneys conferred with the judge when Weinhardt began asking about which supervisors sexually harassed her.

Out of the presence of the jury, Rucal identified Matt Derrick as one of the supervisors after looking at his picture. On the first day of trial, Derrick testified he did not know Rucal.

Black Hawk County District Associate Judge Nathan Callahan said the defense may only ask Rucal about any interactions with Derrick in which she may have revealed she was underaged.

“I’m not going to have a mini-trial about whether or not this harassment occurred,” he said.

The jury is out for 15 minutes for the afternoon break.

Derrick has been one of the state’s most incriminating witnesses. He testified he told Rubashkin about all the minors at the plant,that he received death threats for doing so,  and that he and Rubashkin received an e-mail ordering Derrick to obtain false documents for workers.

He also said this:

“Derrick said he grew close to many of his workers because they were underage, and he had children of his own. He said he took particular interest in a bright 12-year-old boy.

Derrick said he considered taking the boy into his home so he could obtain citizenship and go to college.

He said most of his 40 employees in the meat cutting department were minors.

“I think I had more children working on the cut-up floor than I had adults,” he said.”

1:50 p.m., Waterloo, Ia. — Toby Bensasson, former controller at Agriprocessors, said he had several conversations with Sholom Rubashkin in which they spoke of the importance of keeping minors out of the kosher slaughterhouse.

“He and I always agreed — no underage people at the plant,” he said.

Bensasson pleaded guilty in August to conspiracy to make false statements to a bank. He begins a 41-month prison sentence in Duluth, Minn. on Monday. The term was reduced from 60 months because he cooperated in Rubashkin’s federal financial fraud trial last fall.

Bensasson said the company would lose its insurance coverage if minors were discovered to be working at the plant.

He said he once confronted a girl under 18 after a human resources employee alerted him to the issue.

“Then I said, get out, now. This conversation is over.”

When he reported the incident to Sholom Rubashkin, Bensasson said he responded, “Very good. We can’t have minors.

The next witness is Eric Spalding, an agent with U.S. Immigration and Customs Enforcement. He’s explaining what a U-visa is.

To receive one, a person must suffer substantial physical or mental abuse, and work with law enforcement in learning more about a crime or in aiding in the prosecution of a crime. They can then work legally in the country for four years while they apply for permanent residence.

Jump to 1:45 p.m. at this post for a more detailed explanation.

The defense has argued that witnesses who have applied for a U-visa may be unreliable because assisting the government will help their chances to stay in the country.

Defense attorney Mark Weinhardt cross-examined the witness for at least 10 minutes. He pointed out that a U-visa recipient under 21 may bring their parents and siblings under 18 to the United States.

1:15 p.m., Waterloo, Ia. — Sholom Rubashkin is seated between his attorneys, and appears to be in good spirits after a week in the hospital with an arm infection. He has been talking to his children, who are seated in the front row of the gallery.

Several of Rubashkin’s supporters, who are Hasidic Jews, have been praying before the judge enters the courtroom with tefillin — the black arm and head bands wrapped around their bodies.

The first witness will be Toby Bensasson, former comptroller of Agriprocessors. He pleaded guilty last year to conspiracy to make false statements to a bank.

He was released from a Cedar Rapids hospital this morning, but won’t make it to Waterloo until around noon.

Rubashkin has been in the hospital since Sunday, when he was admitted with an arm infection. Linn County jail in Cedar Rapids is housing him for the duration of the trial.

Rubashkin is standing trial on 83 misdemeanor child labor charges. The prosecution is set to begin its second week of witnesses in the scheduled three-week trial.