Defense attorney F. Montgomery Brown said he intends to ask for time off next week because the Jewish holiday of Shavuot. He said will present more details on the holiday tomorrow. “Your honor, I don’t have all my Jewish holiday ducks in a row,” he said. 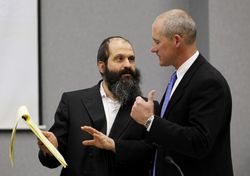 4:15 p.m., Waterloo, Ia — Defense attorney F. Montgomery Brown said he intends to ask for time off next week because the Jewish holiday of Shavot.

He said will present more details on the holiday tomorrow.

“Your honor, I don’t have all my Jewish holiday ducks in a row,” he said.

The judge said court will not be in session May 28 because of furloughs. He also plans to adjourn court early on Fridays to give Rubashkin time to travel to Cedar Rapids before sundown, when the weekly Sabbath begins.

He noted because the child labor charges are simple misdemeanors, Rubashkin is not required to present during trial.

Court is adjourned until 9 a.m. tomorrow.

He was in ninth grade when he quit school to work at Agriprocessors. He said he learned about the job from classmates.

Garcia stood in front of the jury to demonstrate who he pulled 20-pound slabs of beef off of a conveyor belt and into a box.

Once he stabbed the hook into his left cheek bone, just below his eye. He said he did not seek medical care, because he could not afford it.

He said he has lost weight since returning to Guatemala because of a lack of nutrition.

Defense attorneys asked the nearly 6-foot tall interpreter to stand next to Garcia to establish his height, which is about five feet.

The defense has suggested to several former underage workers that it could be difficult for Americans to determine the age of young Guatemalans.

The jury is now out, and the judge is taking care of some “housekeeping.”

2:50 p.m., Waterloo, Ia. — Joel Eduardo Rucal said he and his girlfriend dropped out of 8th grade to work at Agriprocessors.

Rucal  worked 12-hour shifts that started at 6 p.m. He used a medium-sized knife to cut poultry, and suffered cuts on the job. He cleaned and sharpened his knife, and his mother’s knife, during breaks, he said.

He sometimes poured a powder into a container of water until it turned purple. The vapors made his eyes and nose burn, he said.

His lip swelled badly when he dropped a chicken and chemicals splashed up on his face, he said. His lip felt like it was going to burst, he said.

After the accident, he said he received a mask but no further treatment.

1:59 p.m., Waterloo, Ia. — The first witness of the afternoon was William A. Musus Alonzo. He said he started working in the sanitation department at Agriprocessors when he was 13.

He used a pressurized hose to wash slaughtering equipment that exposed him to hot water and chlorine, he said.

When he completed his overnight 12-hour shifts, he said he sometimes couldn’t sleep because his eyes burned.

He said he rinsed his eyes with cold water “because it felt good.” He never received safety training, and learned how to do his job from co-workers, he said.

When he needed new safety equipment, he said the cost was deducted from his paycheck.

Musus Alonzo, 17, said he now lives in Decorah with a family that adopted him until he turns 18. He only attended school for about a month while he worked at Agriprocessors for two years, he said.

He said he lied about his age and name to obtain work at the kosher slaughterhouse.

Defense attorney F. Montgomery Brown said he intends to ask for time off next week because the Jewish holiday of Shavuot. He said will present more details on the holiday tomorrow. “Your honor, I don’t have all my Jewish holiday ducks in a row,” he said.
Failed messiah was established and run in 2004 by Mr. Shmarya (Scott)Rosenberg. The site was acquired by Diversified Holdings, Feb 2016.