« As The Spinka Rebbe Goes To Prison, The Story Of His Namesake Comes To Light | Main | Still Dangerous: Another Victim Of Alleged Pedophile Comes Forward As Alleged Molester's Attorney Spins »

Court gave Rubashkin and his attorneys today and Friday off so they could examine new evidence. 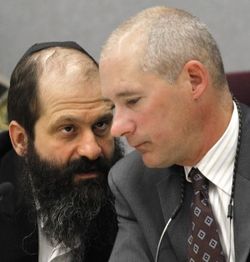 Waterloo, Ia. — A five-woman, three-man jury will listen to evidence in the child-labor trial of former Agriprocessors executive Sholom Rubashkin, beginning next week.

Opening statements are to begin Monday. State prosecutors said they expect to call on the first day five former slaughterhouse workers who were underage. They could present as many as 30 former workers as witnesses in the scheduled three-week trial.

After Callahan swore in the jury, Rubashkin and his defense attorney huddled in a back room to view videotaped interviews of potential government witnesses.

Opening statements were scheduled after the judge granted a defense request Tuesday for extra time to review the new evidence, which was presented to them last week.

The state has charged Rubashkin with 83 misdemeanor child-labor charges. Prosecutors allege minors worked excessive hours and were exposed to poisonous chemicals and dangerous machinery at the kosher slaughterhouse in Postville. The plant was the site of a May 2008 raid in which federal agents arrested hundreds of workers.
Flying in eight former workers from Guatemala who were underage to testify is expected to cost the state as much as $35,000.

In what the Iowa attorney general's office called an unprecedented move in a criminal case, it asked the state's executive council to pay the costs.

The council is made up of Iowa's top elected executive officials, including the governor, secretary of state, state auditor, state treasurer and secretary of agriculture.

The attorney general's office requested the money because it has never had to pay for so many witnesses to travel so far to testify, said Eric Tabor, the attorney general's chief of staff. In addition, he said, the office is facing budget cuts that have shrunk its resources.
"As far as criminal matters, this experience is unique, to my knowledge," he said.

Rubashkin will travel daily from the Linn County Jail in Cedar Rapids for the duration of his trial in Waterloo, the Black Hawk County sheriff's office said.

The former plant executive had been staying in Linn County while awaiting sentencing May 27 following his conviction on 86 federal financial fraud charges in November.

Rubashkin was originally to stay in the Black Hawk County Jail near the courthouse for the state trial. But when the jail could not provide a level of kosher food his religious beliefs required, he refused to eat for 24 hours in what his attorneys called a hunger strike.

Court gave Rubashkin and his attorneys today and Friday off so they could examine new evidence.
Failed messiah was established and run in 2004 by Mr. Shmarya (Scott)Rosenberg. The site was acquired by Diversified Holdings, Feb 2016.