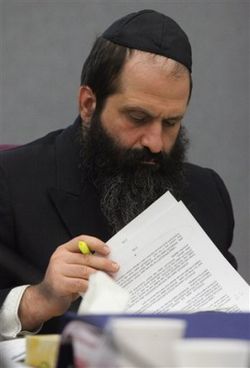 Rubashkin, who had worked at the meatpacking plant in Postville when it was raided in May 2008, is currently on trial in Waterloo for misdemeanor state child labor violations.

That trial is slated to last the rest of this week and overlaps with sentencing Rubashkin's federal fraud conviction, which had been scheduled for Thursday.

Today (Monday) U.S. District Court Judge Linda Reade entered an order delaying the federal sentencing until June 22. The sentencing will be at 3:30 p.m. at the courthouse in Cedar Rapids.

Rubashkin has been convicted for fraud in connection with loans the company received, and a sentencing hearing had started April 28. Judge Reade didn't announce the punishment, saying she needed more time to consider the matter. She initailly said Thursday was the date the sentence would be completed.

Meanwhile trial for the state child labor charges started May 11.