Sholom Rubashkin's defense team continued to question the motivation of witnesses who received visas in exchange for testimony that helps in the prosecution of the former Agriprocessors executive. 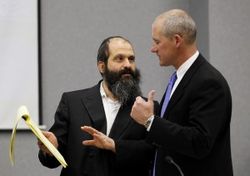 Waterloo, Ia. — Sholom Rubashkin's defense team on Wednesday continued to question the motivation of witnesses who received visas in exchange for testimony that helps in the prosecution of the former Agriprocessors executive.

Defense attorney F. Montgomery Brown asked Ana Cecilia Arguello Lopez if she was encouraged by her attorney or the government to reveal conditions inside Agriprocessors.

The state alleges minors worked excessive hours and were exposed to poisonous chemicals and dangerous machinery.

Arguello Lopez said she volunteered the information because her supervisors treated her unfairly.

"And you knew if you could not tell about things that happened to you at Agriprocessors, you wouldn't be able to stay in the country?" he said.

"I'm not going to invent anything. Everything that I said is the truth," she said.

Rubashkin, a former executive at the kosher slaughterhouse in Postville, faces 83 misdemeanor child-labor charges. The plant filed for bankruptcy after an immigration raid two years ago Wednesday, and now operates under a new owner.
Brown followed a similar line of questioning with some of the five witnesses the state said worked as minors at the plant. Several of the state's witnesses received U-visas, which allows them to work in the United States for four years.

Each took the stand and described similar stories of lying about their identities to gain employment at the plant, where they worked long hours in dangerous conditions.

Documents presented by the defense show Arguello Lopez gave several different ages to authorities in the months after the raid.
On the stand, she had difficulty figuring out how old she was when asked her age on specific dates. She later said she has never received any education, even in Guatemala.

Elmer Hernandez Lopez said he was 16 when he started working at Agriprocessors shortly after arriving from Guatemala. He said he eventually worked more than 12 hours a day.

Most workers testified that they rarely saw Rubashkin walk by their work area, and when he did he never said a word. However, Lopez said Rubashkin sometimes walked by and urged them to work faster.

Rosita Trejo Pinales said she worked for up to 10 hours a day at the plant after school. She went to bed around 1 a.m. every weekday, then attended school in the morning, she said.
"I needed the work. We needed money to survive," she said.

Defense attorney Mark Weinhardt asked how Pinales, who is Mexican, knew other children worked at the plant. The defense has argued this week that it is difficult for non-Guatemalans to tell the age of young workers from that country.

Pinales said she only knew because she attended school with them.

"You can't tell how old they are just by looking at them?" he said.

Black Hawk County District Associate Judge Nathan Callahan said he will excuse the jury next Wednesday and Thursday to accommodate the Jewish holiday of Shavuot.

Callahan said he excused a juror because of a conflict, leaving just one alternate.

Sholom Rubashkin's defense team continued to question the motivation of witnesses who received visas in exchange for testimony that helps in the prosecution of the former Agriprocessors executive.
Failed messiah was established and run in 2004 by Mr. Shmarya (Scott)Rosenberg. The site was acquired by Diversified Holdings, Feb 2016.