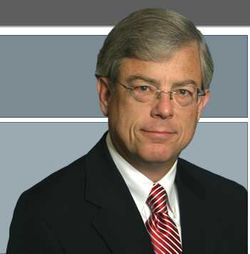 It was announced today at the national headquarters of Agudath Israel of America that Guy R. Cook, the Iowa attorney representing former Agriprocessors CEO Sholom Rubashkin, will be addressing the organization’s 88th Anniversary Dinner this Sunday, May 9, at the New York Hilton in Manhattan.

Mr. Cook has been front and center in his advocacy on behalf of the beleaguered Mr. Rubashkin, whose case has riveted the attention of much of the Orthodox Jewish world – and of many outside of it, including former US Justice Department officials, who perceive disturbing irregularities in the prosecution of the former Agriprocessors official.

Mr. Cook, a partner in the prominent Iowa firm Grefe and Sidney, has served as Assistant United States Attorney for the Southern District of Iowa.  He is also a past president of the Polk County Bar Association, which represents more than a quarter of all the lawyers in Iowa, and presently serves as a member of the Board of Governors of the Iowa State Bar Association.

Rabbi Chaim Dovid Zwiebel, Agudath Israel’s executive vice president, has worked closely with Mr. Cook over the past year-and-a-half as the Rubashkin case has proceeded in the Iowa and federal courts.

Rabbi Zwiebel had warm words for the Iowa attorney.  “Over recent months,” he said, “I have had the opportunity to witness Guy Cook’s’s tireless efforts on behalf of Sholom Rubashkin.  In addition to his outstanding legal skills, I have been particularly impressed with his ability, as a native Iowan whose interactions with Jews, and certainly Orthodox Jews, were probably somewhat limited, to become so attuned to our community and so sensitive to Mr. Rubashkin’s religious beliefs and needs.”

Those in attendance at the dinner attendees will also hear an address by the Novominsker Rebbe, shlit”a, the Rosh Agudas Yisroel; watch a special video tribute to Rabbi Chaskel Besser, z”l; and participate in the bestowal of well-deserved honors on a group of outstanding askonim.

Reservations can still be made – until noon Sunday – by contacting Agudath Israel’s dinner office at 212 797-8177.

It was announced Friday that Guy R. Cook, the Iowa attorney representing former Agriprocessors head Sholom Rubashkin, will be addressing Agudah’s 88th anniversary dinner.
Failed messiah was established and run in 2004 by Mr. Shmarya (Scott)Rosenberg. The site was acquired by Diversified Holdings, Feb 2016.